George Ryan Ross III (born August 30, 1986[1]) is an American guitarist, singer and songwriter most known for his work as the lead guitarist, backup vocalist and main songwriter for the band Panic! at the Disco before his departure from the band in 2009. Ross and former Panic bassist Jon Walker are the founding members of the band The Young Veins, in which Ross is the lead singer.[2] Most recently, Ross has been credited as a composer for a track on Vices & Virtues, Panic! at the Disco's 2011 album.

Born in Las Vegas, Nevada, Ross got a guitar for Christmas when he was 12, and began collaborating with best friend Spencer Smith who received a drum kit. Ross and Smith mostly covered Blink-182 songs with Ross on vocals. Their two-piece band was originally called Pet Salamander. Ross wrote lyrics to his first song when he was 14 years old.

They teamed up with Brent Wilson and another boy named Trevor on guitar to make "Summer League" before they met Brendon Urie and formed Panic! at the Disco.

Main article: Panic! at the Disco 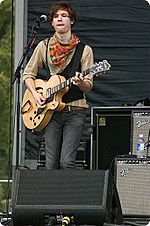 Ross performing with Panic! at the Disco, in 2007.

Ross, alongside with Spencer Smith formed Panic! at the Disco in 2004, later joined by Brent Wilson and Brendon Urie. The band's debut album, A Fever You Can't Sweat Out was recorded between the time frame of June to September 2005 and was released on September 27, 2005.

On July 13, 2009, Ross spoke with MTV about his split from the Panic! at the Disco. He stated that "the split had been in the cards for sometime now. It just took everyone a while to realize it". Ross told MTV that he and the remaining members of Panic! at the Disco are still good friends and had recently spoken over the Fourth of July weekend. Ross spoke about his and Walker's upcoming project as well. "He and Walker are writing and recording songs (with Pretty. Odd. producer Rob Mathes) at a lightning-quick pace, and they'll soon be revealing the fruits of their labor". Since then, their new band called The Young Veins has released their song "Change" onto the Internet.[3]

The Young Veins performing at Jack Rabbits in Jacksonville, FL on March 27th, 2010.

On July 15, 2009, Ross told MTV that the new sound he and Walker are working on is, "They're more, uh, I wouldn't want to say 'heavy,' but I guess I would have to, in the sense of, like, early garage music and Kinks and stuff. The songs are shorter and faster, and I guess they're more rock and roll than flowery stuff". He talked about how there is probably not going to be any orchestration on the album, unlike Pretty. Odd., which was loaded with orchestration. He and Walker are also recording with the help of Alex Greenwald from Phantom Planet along with Panic!'s former touring keyboard player, Eric Ronick. According to Ross, he and Walker are trying to release their new single tentatively titled, "Change". However, Ross is contractually bound to Fueled By Ramen to provide new music whereas Walker is not. He wants to be released from his contract with Fueled by Ramen "because it doesn't seem like it's going to be the right place for this stuff, and I think everybody knows that, on both sides, [FBR President] John Janick included. It's just been taking some time to get worked out."[4]

On October 16, Ross had an interview with MTV saying that their first record, Take a Vacation!, is done, and they are working to find a record company willing to release it.[5]

The Young Veins were signed to One Haven Music and their debut was released on June 8, 2010. On December 10, 2010, The Young Veins entered on a hiatus period.

In 2013, Ross released a two-track untitled demo EP as well as a couple of other songs through his official Soundcloud page. The description of the page says: "Thanks for waiting. I'm back now."[6]

Ross appeared along with former bandmates Brendon Urie, Spencer Smith, and Jon Walker in the Gym Class Heroes music video for the song "Clothes Off!!". He also appears with them in The Cab's music video for "One of THOSE Nights", along with Fall Out Boy members Patrick Stump and Pete Wentz.[citation needed]

In 2011, Ross was credited as a composer on ex-band Panic! at the Disco album Vices & Virtues for the track "Nearly Witches (Ever Since We Met...)", a song that was originally created whilst Ross and Walker were still in the band.[citation needed] He also recorded a song titled "Superbowl Hero" with Alex Greenwald and Michael Runion under a new band, RAM (Ryan, Alex, Michael).[citation needed]