From Infogalactic: the planetary knowledge core
Jump to: navigation, search
For other uses, see Rye (disambiguation).

Rye (Secale cereale) is a grass grown extensively as a grain, a cover crop and as a forage crop. It is a member of the wheat tribe (Triticeae) and is closely related to barley (Hordeum) and wheat (Triticum). Rye grain is used for flour, rye bread, rye beer, crisp bread, some whiskeys, some vodkas, and animal fodder. It can also be eaten whole, either as boiled rye berries, or by being rolled, similar to rolled oats.

Rye is a cereal grain and should not be confused with ryegrass, which is used for lawns, pasture, and hay for livestock. 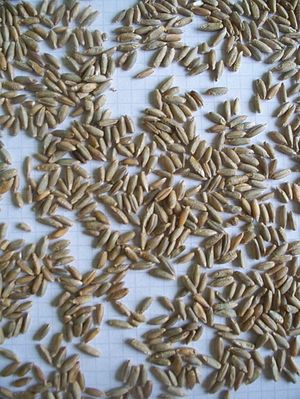 Rye is one of a number of species that grow wild in central and eastern Turkey, and in adjacent areas. Domesticated rye occurs in small quantities at a number of Neolithic sites in (Asia Minor) Turkey, such as PPNB Can Hasan III, but is otherwise virtually absent from the archaeological record until the Bronze Age of central Europe, c. 1800–1500 BC.[1] It is possible that rye traveled west from (Asia Minor) Turkey as a minor admixture in wheat (possibly as a result of Vavilovian mimicry), and was only later cultivated in its own right. Although archeological evidence of this grain has been found in Roman contexts along the Rhine, Danube, and in the British Isles,[citation needed] Pliny the Elder was dismissive of rye, writing that it "is a very poor food and only serves to avert starvation"[2] and spelt is mixed into it "to mitigate its bitter taste, and even then is most unpleasant to the stomach".[3]

Since the Middle Ages people have cultivated rye widely in Central and Eastern Europe. It serves as the main bread cereal in most areas east of the French-German border and north of Hungary. In Southern Europe, it was cultivated on marginal lands.

Claims of much earlier cultivation of rye, at the Epipalaeolithic site of Tell Abu Hureyra in the Euphrates valley of northern Syria remain controversial. Critics point to inconsistencies in the radiocarbon dates, and identifications based solely on grain, rather than on chaff.

Winter rye is any breed of rye planted in the fall to provide ground cover for the winter. It actually grows during any warmer days of the winter, when sunlight temporarily warms the plant above freezing, even while there is general snow cover. It can be used to prevent the growth of winter-hardy weeds, and can either be harvested as a bonus crop, or tilled directly into the ground in spring to provide more organic matter for the next summer's crop. It is sometimes used in winter gardens, and is a common nurse crop.

The flame moth, rustic shoulder-knot and turnip moth are among the species of Lepidoptera whose larvae feed on rye. 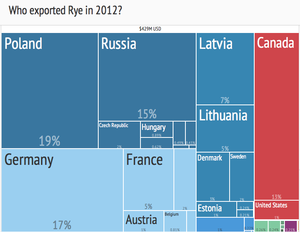 Rye is grown primarily in Eastern, Central and Northern Europe. The main rye belt stretches from northern Germany through Poland, Ukraine, Belarus, Lithuania and Latvia into central and northern Russia. Rye is also grown in North America (Canada and the USA), in South America (Argentina, Brazil and Chile), in Oceania (Australia and New Zealand) in Turkey, in Kazakhstan and in northern China.

Rye is highly susceptible to the ergot fungus. Consumption of ergot-infected rye by humans and animals results in a serious medical condition known as ergotism. Ergotism can cause both physical and mental harm, including convulsions, miscarriage, necrosis of digits, hallucinations and death. Historically, damp northern countries that have depended on rye as a staple crop were subject to periodic epidemics of this condition. There have been "occurrence[s] of ergotism with periods where there were high incidents of people persecuted for being witches. Emphasis was placed on the Salem witch trials in Massachusetts in 1692, where there was a sudden rise in the number of people accused of being witches, but earlier examples were taken from Europe, as well."[not in citation given][5] 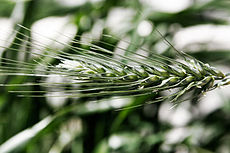 Rye bread, including pumpernickel, is a widely eaten food in Northern and Eastern Europe. Rye is also used to make crisp bread. Rye flour is high in gliadin but low in glutenin. It therefore has a lower gluten content than wheat flour. It also contains a higher proportion of soluble fiber. Alkylresorcinols are phenolic lipids present in high amounts in the bran layer (e.g. pericarp, testa and aleurone layers) of wheat and rye (0.1–0.3% of dry weight).[6]

Rye is used to make alcoholic drinks, like rye whiskey and rye beer. Other uses of rye include kvass and an alternative medicine known as rye extract. Rye straw is used to make corn dollies.

Rye grows well in much poorer soils than those necessary for most cereal grains. Thus, it is an especially valuable crop in regions where the soil has sand or peat. Rye plants withstand cold better than other small grains do. Rye will survive with snow cover that would otherwise result in winter-kill for winter wheat. Most farmers grow winter ryes, which are planted and begin to grow in autumn. In spring, the plants develop and produce their crop.[5]

Fall-planted rye shows fast growth. By the summer solstice, plants reach their maximum height of about a 120 cm (4 ft) while spring-planted wheat has only recently germinated. Vigorous growth suppresses even the most noxious weed competitors and rye can be grown without application of herbicides.

Rye is a common, unwanted invader of winter wheat fields. If allowed to grow and mature, it may cause substantially reduced prices (docking) for harvested wheat.[7]

As previously addressed, Secale cereale can survive through many climates and in many environments. Researchers have pinpointed certain proteins that are responsible for the antifreeze properties, which are proteins that help the organism remain alive in subzero environments. This species' capability occurs in a different manner from the antifreeze property of some fish and insects that also have antifreeze characteristic. Specifically, the leaves of winter Secale cereale produce various polypeptides that possess the antifreeze capability which are different than the antifreeze polypeptides produced by fish and insects.[8] In addition to these survival capabilities under high stress circumstances, Secale cereale is known to improve the soil caliber in the gentle paddies in which it lives; however, there has been evidence to suggest that its biomass has increased greenhouse gas emissions. Specifically, methane is released during its cultivation. Moreover, this research also suggests that the biomass of this plant changes at different stages of growth, so it can be minimized by selecting a specific growth stage in which it is harvested. The methane production of Secale cereale was heightened during the pre-maturing stage of development. However, during the flowering stage of the plant the methane was the least significant amount. This information is good to know because the flowering stage would also be the most opportune time of an increased nutritional value of the plant as well. In this way, the unfavorable effects of Secale cereale on the environment can be diminished.[9] In conclusion, Secale cereale can be used in varying environments.

Along with Secale cereale's relationship and impact on the environment, it is also a valuable species because of its expansive diversity and uses. In northern Portugal, fourteen different populations of Secale cereale were analyzed in order to better understand their differences. It was discovered that the storage proteins are very diverse and possess a lot of overall genetic variation as well, which is useful information to know because scientists can use its diversity in breeding to produce the most efficient species of Secale cereale, or rye.[10] Moreover, the beneficial characteristics of Secale cereale can also be used to improve certain characteristics of other useful plants, like wheat. The pollination abilities of wheat were vastly improved when there was cross-pollination with Secale cereale. The addition of the rye chromosome 4R increased the size of the wheat anther along with increasing the number of pollen grains present.[11] Along with improved wheat, the optimal characteristics of Secale cereale can also be combined with another perennial rye, specifically Secale cereanum in order to produce a species with the beneficial characteristics of each. The hybrid plant can be grown in all environments, even with less than favorable soil and protects some soils from erosion. In addition, the plant mixture has improved forage and is known to contain digestible fiber and protein.[12] Information about the diversity and Secale cereanum’s ability to cross fertilize with other species is useful information for scientists to know as they attempt to come up with various plant species that will be able to feed humanity in the future without leaving a negative footprint on the environment.

Like wheat, barley, and their hybrids and derivatives, rye contains gluten, which makes it an unsuitable grain for consumption by people with gluten-related disorders, such as celiac disease, non-celiac gluten sensitivity and wheat allergy sufferers, among others.[13] Nevertheless, some wheat allergy patients can tolerate rye or barley.[14]