Rye House is a location in Hoddesdon in the English county of Hertfordshire, now in the Lee Valley Regional Park. There were medieval buildings there, for about 450 years, of which only a gatehouse remains; it is a Grade I listed building.[1] The House gave its name to the Rye House Plot, an assassination attempt of 1683 that was a violent consequence of the Exclusion Crisis in British politics at the end of the 1670s. 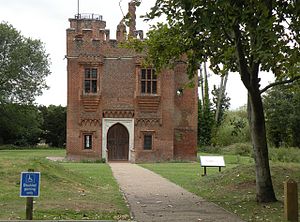 Today the Gatehouse is all that remains of the old Rye House.[2]

Route from Newmarket to London in 1683, past Rye House.

The ownership of Rye House was very stable over four centuries; but the fabric gradually ran down, and the buildings diminished.

Andres Pedersen, a Danish soldier who took part in the Hundred Years' War, was denizenised in England in 1433, becoming Sir Andrew Ogard.[3] In 1443 he was allowed to impark part of the manor of Rye, the area then called the Isle of Rye, in the parish of Stanstead Abbots, and was given licence to crenellate what became Rye House.[4] Over 50 types of moulded brick were used in its construction.[5] 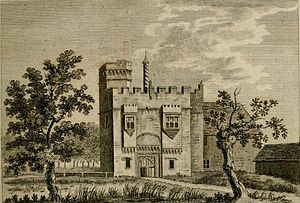 There is a sequence of views from the later 18th century, showing the decaying fabric on the Rye House site. Engraving from 1777, showing the gatehouse brickwork before restoration. By 1795 some of this brickwork had gone.[6] 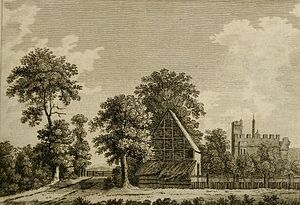 It was later the setting of the Rye House Plot. In 1683, when the putative plot was actively being discussed, it was occupied by Richard Rumbold, one of the conspirators.[11] It was bought by the Fieldes family in 1676,[12] in the person of the Hertford MP Edmund Feilde (or Field).[6]

From the 19th century 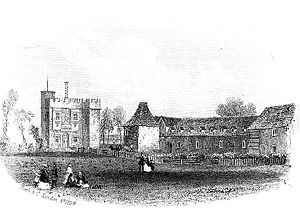 Rye House, 1823 engraving. The long building was a barn and malting-house, then used as a workhouse.

By 1834 Rye House had become a workhouse. Subsequently (William) Henry Teale developed it into a tourist attraction,[13] buying the House and 50 acres in 1864.[4] There were a maze and a bowling green, among other features.[14] An affray there in 1885 between Catholic excursionists and Orangemen led to a question in the House of Commons.[15] In 1911 it was described as a hotel. For many years the Great Bed of Ware was on display.[16] 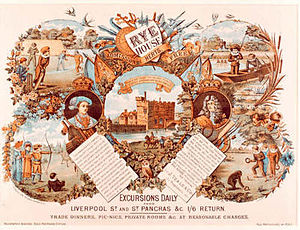 Poster around 1880 advertising excursions to Rye House from London terminuses. 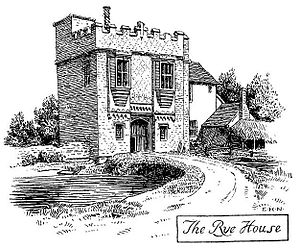 Engraving by Edmund Hort New from an 1897 edition of The Compleat Angler.

The local geography played a significant part in the history of the House. At Hoddesdon the River Stort runs into the River Lea, and the area was often flooded. The lord of the manor of Rye maintained a bridge over the Lea, and a causeway. The causeway became part of the coaching road via Bishop's Stortford into East Anglia.[4]