The manufacture nationale de Sèvres is one of the principle European porcelain manufacturies. It is located in Sèvres, Hauts-de-Seine, France.

The manufactury was continuously part of the political order, first royal, then imperial and finally national. Continuously in operation, the manufactury has been creating objects since 1740. Its production is still largely based around the creation of contemporary objects today. It became part of the Cité de la céramique with the Musée national de Céramique-Sèvres in 2010 and since 2012 with the Musée national Adrien Dubouché in Limoges. 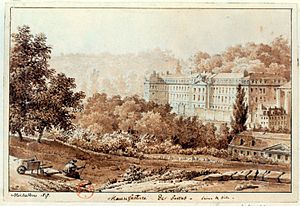 130 metres long and four stories high, the building was erected between 1753 and 1756 by the architect Laurent Lindet on the site of a farm called "de la Guyarde." There was a central pavilion surmounted by a pediment with a clock from the old royal glass-makers on the fourth level, with two long wings terminating in corner pavilions at each end. In front of the pavillion was a "public" courtyard, enclosed by a wrought iron fence. This front area was decorated twice a month in order to hold parties for visitors.

The ground floor of the building contained clay reserves, books and storerooms of raw materials. The first floor contained the workshops of the moulders, plasterers, sculptors, engravers and the ovens. On the second floor were the sculptors, turners, repairers and packers. Finally, the painters, gilders and makers of animals and figures worked in the loft

Jean-Claude Chambellan Duplessis served as artistic director of the Vincennes porcelain manufactory and its successor at Sèvres from 1748 to his death in 1774. The manufactury was brought under the Crown in 1759. 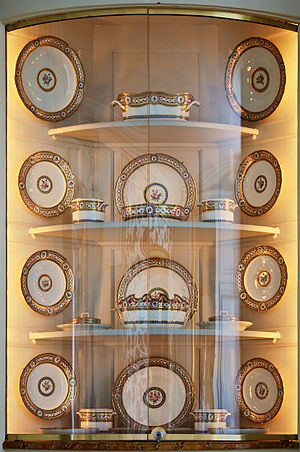 Pieces of a service "with decoration rich in colours and rich in gold" produced by the manufactury for Queen Marie Antoinette in 1784.

Initially, the manufactury produced a Soft-paste porcelain. In 1768, the Bordeaux chemist, Vilaris and his friend Jean-Baptiste Darnet discovered the first deposit of kaolin on French soil at Saint-Yrieix-la-Perche to the south of Limoges. On 13 February 1771, the Comte de Thy de Milly of the Royal Academy sent the academy a report on the creation of Hard-paste porcelain. This report was published in 1777 in volume 7 of the encyclopedia, Art de la porcelaine. This work derived from his observations of the different manufacturies of Germany, especially Meissen. "Up to this time, the manufacturies of France - Sèvres not excepted - have only produced glass porcelain, which only has some qualities of the real thing...".[2]

Hard-paste porcelain began to be manufactured in Sèvres after 1770.

In 1875, the manufactury was transferred to buildings which had been specially built by the French state next to the Parc de Saint-Cloud. It is still on this site today, classed as a Monument historique, but still in operation.

In 1920, the Treaty of Sèvres, the peace treaty between the Ottoman Empire and Allies at the end of World War I, was signed at the factory.

Women at the royal manufactury

At the Manufacture de Vincennes, in 1748, a "floristry" composed of twenty young girls was established under the direction of Madame Gravant. It continued its activities until 1753, when women were banned from the manufactury. In 1756 Sèvres employed two hundred male workers.

"... The few women who continued to work at Vincennes and then at Sèvres, after this [the floristry], henceforth worked from home, picking up the wares, taking them home and bringing them back each day, despite the risk of breaking the delicate objects which they painted and burnished."[3]. 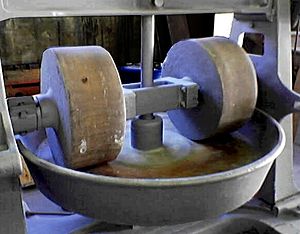 The kaolin was brought, traditionally, from Saint-Yrieix near Limoges. Nowadays there are many sources. The glaze, applied as enamel over the kaolin paste after firing is made mainly of Marcognac pegmatite, mixed with feldspath and quart.[4].

The blue of Sèvres is a characteristic colour of the manufactury. It is made from a cobalt oxide which is incorporated into the glaze. 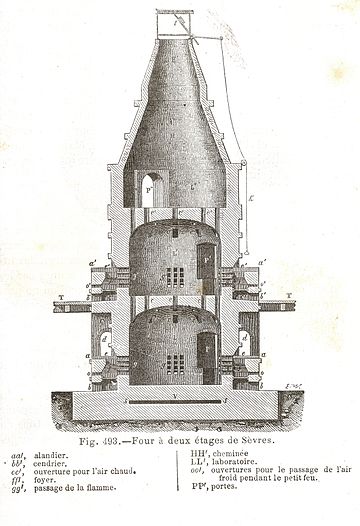 The ceramist Ambroise Milet was Director of the Paste Kilns and Chief of Manufacture at the manufactury before he left it in 1883 at the age of 53. One of the key tasks of Ambroise Milet was the construction of six great Anagama kilns in 1877. These kilns are today classed as French monuments historiques.

The kilns consist of a cylindrical body separated into three levels. The lowest is called the "first laboratoire" and is 2.6 m in diameter and 3 m tall. The middle level is called the "second laboratoire" and is 2.6 metres in diameter and 2 metres high. The top level is the 2 metre high chimney cone. The firebox is an opening at the bottom of the first laboratoire, 1 metre high, 0.58 metres wide and 0.29 metres deep.[5] In the vault between the first and second laboratoires, is a large flue at the centre and 9 small ones around the edge. These flues serve to guide the flames and release the heated gas. Grills, called "flue-guards" are arranged to divide the flames. At the base of the second laboratoire, a little fire box helps to increase the temperature further. The oven contains four fireboxes for distributing the heat effectively.

Only birch wood is used to heat the oven. Its strong and quick combustion is uniform, its flames are long and it releases few cinders. Only this wood can bring the oven to the high temperatures required (800°C in the small fires, nearly 1300°C in the main one. The logs of wood are 73 cm long. The oven can fire Bisque porcelain in 15-16 hours and glass or glazed porcelain in 11-12 hours. One firing requires 25 cubic metres of wood, which is burnt over 48 hours using a specialised technique in order to raise the temperature. The oven then takes between fifteen and twenty days to cool down. The wall which blocks the oven door is dismantled in order to empty the oven. A hundred pieces are fired at once, depending on their exact size.

The firing process gives the incomparable enamel quality to the porcelain which cannot be obtained by other techniques. The cause of this is the high uniformity of heat in the oven and the extremely gradual cooling process. Among other things, these ovens are uniquely capable of producing large pieces, which Sèvres has made a specialty.

The last large firing with wood took place on October 2006. Nearly 180 pieces were produced for l'Epreuve du Feu ("the trial by flame"), the name of the exhibition which these pieces were displayed in at the Parisian gallery of the manufactury, before they were dispersed. The opening of the oven, as it began to burn, was broadcast live on television. The next firing will be announced on the official website of the manufactury.

Aside from these exceptional firings, the manufactury uses electric ovens for all contemporary production. 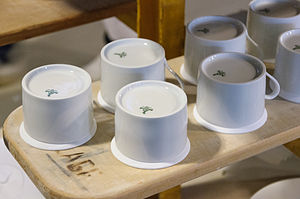 Tea cups from the Litron service, produced by a "white oven" bearing the mark of the manufactory.

Until 2009, the Manufacture nationale de Sèvres was a Service à compétence nationale (national service) administered by the French ministry of culture and communication.

Since becoming a public organisation, its mission, in accordance with its origins in 1740, is to produce ceramic works of art using artisanal techniques, including both reproductions of old models and contmeporary creations. It produces good both for state needs and commercial sale and is charged with promoting technological and artistic research in ceramics. Its work is concentrated on the upmarket pieces, maintaining a high quality of artisanry, while neglecting industrial scale mass production.

The creations of the manufactory are displayed in only two galleries: one in Sèvres and the other in the heart of Paris, in the 1st arrondissement, between the Louvre and the Comédie Française. The manufactory also organises numerous exhibitions around the world and participates in a number of contemporary art festivals. 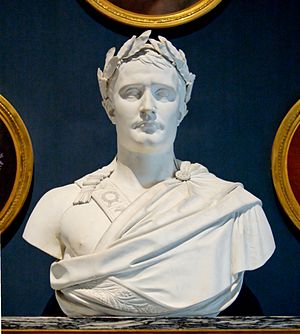 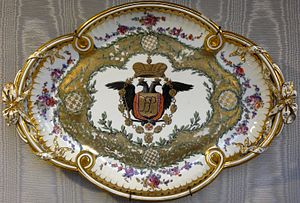 On account of its reputation for excellence and its prestige, the manufactory has always attracted some of the best ceramists. Among the most well-known are: