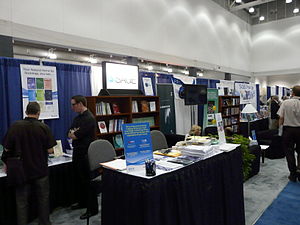 In 2012, SAGE was named the Independent Publishers Guild Academic and Professional Publisher of the Year.[6]

Sara Miller McCune is executive chairman of SAGE Publications, which she founded in 1965 in New York City. The company moved to Southern California in 1966. McCune remained president for 18 years and became chairman in 1984, developing the company with her husband George D. McCune.

SAGE Publications was a founding member of the Open Access Scholarly Publishers Association when it was established in 2008.[7] In November 2013 SAGE's membership was placed under review for six months after a SAGE journal, the Journal of International Medical Research, published a false and intentionally flawed paper created and submitted by a reporter for Science as part of a "sting" to test the effectiveness of the peer-review processes of open access journals (see Who's Afraid of Peer Review?).[8] Sage's membership was reinstated at the end of the review period following changes to the journal's editorial processes.[9]