The BIPM specifies twenty prefixes for the International System of Units (SI).

Each prefix name has a symbol which is used in combination with the symbols for units of measure. For example, the symbol for kilo- is k, and is used to produce km, kg, and kW, which are kilometre, kilogram, and kilowatt, respectively.

Prefixes may not be used in combination. This also applies to mass, for which the SI base unit (kilogram) already contains a prefix. For example, milligram (mg) is used instead of microkilogram (µkg).

Prefixes corresponding to an integer power of one thousand are generally preferred. Hence 100 m is preferred over 1 hm (hectometre) or 10 dam (decametres). The prefixes hecto, deca, deci, and centi were commonly used for everyday purposes, especially the centimetre (cm) is common. However, some modern building codes require that the millimetre be used in preference to the centimetre, because "use of centimetres leads to extensive usage of decimal points and confusion".[3]

When units occur in exponentiation, for example, in square and cubic forms, the multiplication prefix must be considered part of the unit, and thus included in the exponentiation.

Application to units of measurement

The choice of prefixes with a given unit is usually dictated by convenience of use. Unit prefixes for amounts that are much larger or smaller than those actually encountered are seldom used, though they remain valid combinations.[clarification needed] In most contexts only a few most common combinations are established as standard.

In use, the kilogram, gram, milligram, microgram, and smaller are fairly common. However, megagram (and gigagram, teragram, etc.) are rarely used; tonnes (and kilotonnes, megatonnes, etc.) or scientific notation are used instead. Megagram is occasionally used to disambiguate the metric tonne from the various non-metric tons. An exception is pollution emission rates, which are typically on the order of Tg/yr. Sometimes only one element is denoted for an emission, such as Tg C/yr or Tg N/yr, so that inter-comparisons of different compounds are easier.

The kilometre, metre, centimetre, millimetre, and smaller are common. (However, the decimetre is rarely used.) The micrometre is often referred to by the non-SI term micron. In some fields such as chemistry, the angstrom (equal to 0.1 nm) historically competed with the nanometre. The femtometre, used mainly in particle physics, is usually called a fermi. For large scales, megametre, gigametre, and larger are rarely used. Instead, non-metric units are used, such as astronomical units, light years, and parsecs; the astronomical unit is mentioned in the SI standards as an accepted non-SI unit.

The second, millisecond, microsecond, and shorter are common. The kilosecond and megasecond also have some use, though for these and longer times one usually uses either scientific notation or minutes, hours, and so on.

Official policies about the use of these prefixes vary slightly between the Bureau International des Poids et Mesures (BIPM) and the American National Institute of Standards and Technology (NIST); and some of the policies of both bodies are at variance with everyday practice. For instance, the NIST advises that "to avoid confusion, prefix symbols (and prefixes) are not used with the time-related unit symbols (names) min (minute), h (hour), d (day); nor with the angle-related symbols (names) ° (degree), ′ (minute), and ″ (second)." [4]

The BIPM’s position on the use of SI prefixes with units of time larger than the second is the same as that of the NIST but their position with regard to angles differs: they state "However astronomers use milliarcsecond, which they denote mas, and microarcsecond, µas, which they use as units for measuring very small angles."[5] The SI unit of angle is the radian, but, as mentioned above, degrees, minutes and seconds see some scientific use.

There exist a number of definitions for the non-SI unit, the calorie. There are gram calories and kilogram calories. One kilogram calorie, which equals one thousand gram calories, often[citation needed] appears capitalized and without a prefix (i.e. 'Cal') when referring to "dietary calories" in food. It is common to apply metric prefixes to the gram calorie but not to the kilogram calorie: thus, for example, 1 kcal = 1000 cal = 1 Cal.

Metric prefixes are widely used outside the system of metric units. Common examples include the megabyte and the decibel. Metric prefixes rarely appear with imperial or US units except in some special cases (e.g., microinch, kilofoot, kilopound or 'kip'). They are also used with other specialized units used in particular fields (e.g., megaelectronvolt, gigaparsec, millibarn). They are also occasionally used with currency units (e.g., gigadollar), mainly by people who are familiar with the prefixes from scientific usage.

The prefix giga is usually pronounced /ˈɡɪɡə/ but sometimes /ˈdʒɪɡə/. According to the American writer Kevin Self, in the 1920s a German committee member of the International Electrotechnical Commission proposed giga as a prefix for 109, drawing on a verse by the humorous poet Christian Morgenstern that appeared in the third (1908) edition of Galgenlieder (Gallows Songs). This suggests a hard German g was originally intended as the pronunciation. Self was unable to ascertain when the /dʒ/ (soft g) pronunciation was accepted, but as of 1995 current practice had returned to /ɡ/ (hard g).[6] [7]

When an SI prefix is affixed to a root word, the prefix carries the stress, while the root drops its stress but retains a full vowel in the syllable that is stressed when the root word stands alone.[citation needed] For example, gigabyte is /ˈɡɪɡəbaɪt/, with stress on the first syllable. However, words in common use outside the scientific community may follow idiosyncratic stress rules. In English speaking countries kilometre is often pronounced /kɨˈlɒmɨtər/, with reduced vowels on both syllables of metre.

The LaTeX typesetting system features an SIunitx package, in which the units of measurement are spelled out, for example, \SI{3}{\tera\hertz} formats as "3 THz". 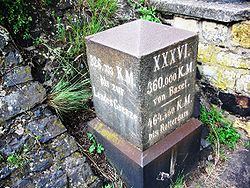 Distance marker on the Rhine: 36 (XXXVI) myriametres from Basel. Note that the stated distance is 360 km; comma is the decimal mark in Germany.

Some of the prefixes formerly used in the metric system have fallen into disuse and were not adopted into the SI.[8][9][10] The decimal prefix myria- (sometimes also written as myrio-) (ten thousand) as well as the binary prefixes double- and demi-, denoting a factor of 2 and ​1⁄2 (one half), respectively,[1] were parts of the original metric system adopted by France in 1795.[1] These were not retained when the SI prefixes were internationally adopted by the 11th CGPM conference in 1960. The halving and doubling prefixes were dropped because they were neither decimal nor symmetrical.

Double prefixes have been used in the past, such as micromillimetres or "millimicrons" (now nanometres), micromicrofarads (now picofarads), kilomegatons (now gigatons), hectokilometres (now 100 kilometres) and the derived adjective hectokilometric (typically used for qualifying the fuel consumption measures).[11] These were disallowed with the introduction of the SI.

Other obsolete double prefixes included "decimilli-" (10−4), which was contracted to "dimi-"[12] and standardized in France up to 1961.

In 2010, UC Davis student Austin Sendek started a petition to designate "hella" as the SI prefix for one octillion (1027).[13] The petition gathered over 60,000 supporters by circulating through Facebook and receiving a significant amount of media coverage.[14] Although the Consultative Committee for Units considered the proposal, it was ultimately rejected. However, hella has been adopted by certain websites, such as Google Calculator[15] and Wolfram Alpha.[16]

In written English, the symbol K is often used informally to mean a multiple of thousand in many contexts. For example, one may talk of a 40K salary (40000), or call the Year 2000 problem the Y2K problem. In these cases an uppercase K is often used. This informal postfix is read or spoken as "thousand" or "grand", or just "k", but never "kilo" (despite that being the origin of the letter).

The financial and general news media mostly use m/M, b/B and t/T as abbreviations for million, billion (109) and trillion (1012) for large quantities, typically currency[18] and population. [19]

For nearly a century, the electrical construction industry used the abbreviation "MCM" to designate a "thousand circular mils" in specifying thicknesses of large electrical cables. Since the mid-1990s, "kcmil" has been adopted as the "official" designation of a thousand circular mils, but the designation "MCM" still remains in wide use. A similar system is used in natural gas sales in the United States: m (or M) for thousands and mm (or MM) for millions of British thermal units or therms, and in the oil industry,[20] where 'MMbbl' is the symbol for 'millions of barrels'.

In some fields of information technology it has been common to designate non-decimal multiples based on powers of 1024, rather than 1000, for some SI prefixes (kilo, mega, giga), contrary to the definitions in the International System of Units (SI). This practice has been sanctioned by some industry associations, including JEDEC. The International Electrotechnical Commission (IEC) standardized the system of binary prefixes (kibi, mebi, gibi, etc.) for this purpose.[21][Note 1]