SJWs Always Lie: Taking Down the Thought Police is a non-fiction political book written by Vox Day that explores and develops various right-wing and alt-right cultural concepts. The Foreword is by Milo Yiannopoulos.

The book is the first in a trilogy. Its sequel SJWs Always Double Down: Anticipating the Thought Police was published in 2017. From the description at Amazon.com:

SJWS ALWAYS LIE is a useful guide to understanding, anticipating, and surviving SJW attacks from the perspective of a man who has not only survived, but thrived, after experiencing multiple attempts by Social Justice Warriors to disqualify, discredit, and disemploy him in the same manner they have successfully attacked Nobel Laureates, technology CEOs, broadcasters, sports commentators, school principals, and policemen. It analyzes well-known SJW attacks as well as the two most successful examples of resistance to the SJW Narrative, the GamerGate and Sad Puppies campaigns.

The book is named after the author's concept of "the First of Day’s Three Laws of SJW" (Social Justice Warrior):

SJW convergence (or Social Justice convergence) describes the process whereby, once a sufficient number of SJWs enter an organization, its focus changes to Social Justice issues to the partial or complete exclusion of its original goals and purpose.

The term was first coined by author and political philosopher Vox Day in this book,[1] where Day writes at length about the theory and the practical impossibility of Social Justice Convergence:

"Even as the institutions have been invaded and coopted in the interests of social justice, they have been rendered unable to fulfill their primary functions. This is the great internal contradiction that the SJWs will never be able to positively resolve, just as the Soviet communists were never able to resolve the contradiction of socialist calculation that brought down their economy and their empire years after Ludwig von Mises first pointed it out. One might call it the Impossibility of Social Justice Convergence; no man can serve two masters, and no institution can effectively serve two different functions. The more an institution converges towards the highest abstract standard of social and distributive justice, the less it is able to perform its primary function."[2]

Subsequently, the concept has been developed more fully in Day's blog and elsewhere. The book gives recommendations for recognizing, resisting, and countering such attacks, one of which is to never apologize for alleged "politically incorrect" actions.[3]

An “SJW convergence” is what happens when an organization—a club, a company, whatever else—is infiltrated by SJWs who use their positions to open the door for other SJWs to get placed into positions within the organization. These SJWs gradually drag the organization into the realm of left-wing politics while abandoning the original purpose for the organization even existing. A full convergence occurs when the SJWs manage to tip the organization over the edge to where it no longer fulfills its original function, usually managing to alienate everyone who isn’t a left-wing wacko so that the organization falls apart, goes out of business, etc.[4] 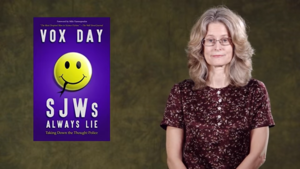 The book was originally released as a Kindle edition. A paperback was released shortly after. It rose above #250 Sellers rank across all of Amazon in the first few days after its initial release. It remains a best seller in Political Philosophy.

There are several translations of the book into other languages.

There is a short pamphlet, SJW Attack Survival Guide, available at the author's Vox Popoli blog.

This book might just be the most dangerous book in America. It begins with a primer on the forces of intolerance and thought control that are currently active in today's society, and provides a revealing look at the hearts and minds of those at the forefront of shutting down open and honest debate. It uses the on-going saga of GamerGate to provide an in-depth analysis of one front in the culture war, and to illustrate the standard playbook of those who prosecute the modern day Salem Witch Trials. The book then segues into effective counter-strategies that can be used against them.[6]

The chapters alternate between disturbing demonstrations of SJW methods and tactics used against people who should have been fairly indestructible (thus bringing the reader close to despair) and showing proven, reliable ways that could be used to actually defeat such attacks (giving the reader hope and the reason to read on)... Substance-wise, the book is packed with information, from full history of GamerGate, to the Hugo Awards situation, to very understandable and valuable explanation of 4th Generation Warfare and how it applies to non-military struggles, to crash course in dialectic vs rhetorical debate techniques.[7]