From Infogalactic: the planetary knowledge core
(Redirected from SS-Reichssicherheitshauptamt)
Jump to: navigation, search

The Reich Main Security Office[notes 1] (German: Reichssicherheitshauptamt or RSHA) was an organization subordinate to Heinrich Himmler in his dual capacities as Chef der Deutschen Polizei (Chief of German Police) and Reichsführer-SS, the head of the Nazi Party's Schutzstaffel (SS). The organization's stated duty was to fight all "enemies of the Reich" inside and outside the borders of Nazi Germany.

The RSHA was created by Himmler on 27 September 1939. Himmler's assumption of total control over all security and police forces in Germany was the "crucial precondition" for the establishment and growth of the SS state.[2] He combined the Nazi Party's Sicherheitsdienst (SD; SS intelligence service) with the Sicherheitspolizei (SiPo; "Security Police"), which was nominally under the Interior Ministry. The SiPo was composed of two sub-departments, the Geheime Staatspolizei (Gestapo; "Secret State Police") and the Kriminalpolizei (Kripo; "Criminal Police").[3] The RSHA was often abbreviated to "RSi-H"[4] in correspondence to avoid confusion with the SS-Rasse- und Siedlungshauptamt (RuSHA; "SS Race and Settlement Office").

The creation of the RSHA represented the formalization, at the top level, of the relationship under which the SD served as the intelligence agency for the security police. A similar coordination existed in the local offices. Within Germany and areas which were incorporated within the Reich for the purpose of civil administration, local offices of the Gestapo, criminal police, and SD were formally separate. They were subject to coordination by inspectors of the security police and SD on the staffs of the local higher SS and police leaders, however, and one of the principal functions of the local SD units was to serve as the intelligence agency for the local Gestapo units. In the occupied territories, the formal relationship between local units of the Gestapo, criminal police, and SD was slightly closer.[5]

Throughout the course of wartime expansion, the RSHA continued to grow at an enormous rate and was "repeatedly reorganized".[6] Routine reorganization did not change the tendency for centralization within the Third Reich nor did it change the general trend for organizations like the RHSA to develop direct relationships to Hitler, adhering to a familiar National Socialist pattern of the leader-follower construct.[7] For the RSHA, its centrality within Nazi Germany was pronounced since departments like the Gestapo (within the RSHA) were controlled by Himmler and his immediate subordinate SS-Obergruppenführer and General of Police Reinhard Heydrich; they held the power of life and death for nearly every German and were essentially above the law.[8] 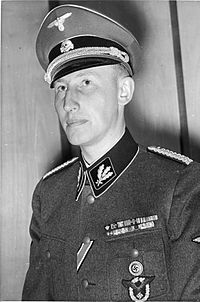 Reinhard Heydrich, the original chief of the RSHA, as an SS-Gruppenführer in August 1940

Heydrich remained the RSHA chief until he was assassinated in 1942. In January 1943, Himmler delegated the office to SS-Obergruppenführer and General of Police Ernst Kaltenbrunner, who headed the RSHA until the end of World War II in Europe.[9] The head of the RSHA was also known as the CSSD or Chef der Sicherheitspolizei und des SD (Chief of the Security Police and of the Security Service).[10][11]

According to British author Gerald Reitlinger, the RSHA 'became a typical overblown bureaucracy... The complexity of RSHA was unequalled... with at least a hundred sub-sections'.[12]

The organization at its simplest was divided into seven offices (German: Ämter):[13][14]

The Gestapo (Amt IV) and Kripo (Amt V), together constituted the Sicherheitspolizei ("Security Police") or SiPo. It was the SiPo that did most of the work of rounding up Jews, Romani people and others deemed to be enemies of the Reich, and deporting them to the concentration and extermination camps in German Occupied Poland and Ukraine.

The RSHA also supplied security forces on an "as needed" basis to local SS and Police Leaders. After the escape of prisoners from Stalag Luft III in March 1944, for example, it was RSHA personnel who facilitated the "Stalag Luft III murders".

During the earlier part of the fighting in the Soviet Union, the RSHA also had operational control of certain Waffen-SS units which Himmler had withheld from the Army High Command (OKH); these units, the 1st and 2nd SS Infantry Brigades and the SS Cavalry Brigade, were formed from former Standarten of the Totenkopfverbände or concentration camp service. Their role was not to serve in combat, except in emergencies, but to carry out "police and security operations" in occupied territories like the Einsatzgruppen.

Role in the Holocaust

The RSHA controlled the security services of Nazi Germany and the Nazi Party (NSDAP). Its activities included intelligence-gathering, criminal investigation, overseeing foreigners, monitoring public opinion, and Nazi indoctrination. The RSHA was also "the central office for the extra-judicial NS (National Socialist) measures of terror and repression from the beginning of the war until 1945."[21] The list of "enemies" included Jews, Communists, Freemasons, pacifists, and Christian activists.[22] In addition to dealing with identified enemies, the RSHA advocated expansionist policies for the Reich and the Germanization of additional territory through settlement.[23] Generalplan Ost (General Plan East), which was the secret Nazi plan to colonize Central and Eastern Europe exclusively with Germans, displacing inhabitants in the process through genocide and ethnic cleansing in order to obtain sufficient Lebensraum, stemmed from officials in the RSHA, among other Nazi organizations.[24]

According to German historian, Klaus Hildebrand, the RSHA was "particularly concerned with racial matters."[25] An order issued by the RSHA on 20 May 1941 overtly demonstrates its utter complicity for the systematic extermination of Jews, namely since the order included instructions to block emigration of any and all Jews attempting to leave Belgium or France as part of the "imminent Final Solution of the Jewish question."[26] Besides blocking emigration, the RSHA, working with Adolf Eichmann's Reich Association of Jews in Germany, deliberately deceived Jews still living in Germany and those of other countries by promising them good living quarters, medical care, and food in Theresienstadt (a concentration camp which was a way station to extermination facilities like Auschwitz) if they turned over their assets to the RSHA through a 'phony' home-purchase plan.[27]

The RSHA also oversaw the Einsatzgruppen, death squads that were formed under the direction of Heydrich and operated by the SS. Originally part of the SiPo, in September 1939 the operational control of the Einsatzgruppen was taken over by the RSHA. When the units were re-formed prior to the invasion of the Soviet Union in 1941, the men of the Einsatzgruppen were recruited from the SD, Gestapo, Kripo, Orpo, and Waffen-SS.[28] The units followed the invasion forces of the German Army into Eastern Europe. In its role as the national and NSDAP security service, the RSHA coordinated activities among a number of different agencies that had wide-ranging responsibilities within the Reich.[29] Not infrequently, commanders of Einsatzgruppen and Einsatzkommando sub-units were also desk officers from the main office of the RSHA.[30] Historian Raul Hilberg estimates that between 1941 and 1945 the Einsatzgruppen and related auxiliary troops killed more than two million people, including 1.3 million Jews.[31]

Part of the RSHA's efforts to encourage other nations (many of whom were occupied by the Germans) to hand over their Jews or entice them into the arms of the Nazis, included coercing them by assigning Jewish advisory officials, all of which was part and parcel to Eichmann's goal of rounding up and transporting "Jews from Slovakia and Hungary, Croatia and Romania."[32] Entry into the Second World War afforded the RSHA the power to act as an intermediary in the areas extended far beyond the Reich, which according to Hans Mommsen, lent itself to solving "emergency situations" and the RHSA's radicalized destructive goals like the Final Solution, were implemented thereupon with bureaucratic methodical cruelty as its power expanded.[33]