From Infogalactic: the planetary knowledge core
Jump to: navigation, search
This article is about the treaty signed in 1991. For the current treaty, see New START. For the rocket, see Start-1.

START (Strategic Arms Reduction Treaty) was a bilateral treaty between the United States of America and the Union of Soviet Socialist Republics (USSR) on the reduction and limitation of strategic offensive arms. The treaty was signed on 31 July 1991 and entered into force on 5 December 1994.[1] The treaty barred its signatories from deploying more than 6,000 nuclear warheads atop a total of 1,600 inter-continental ballistic missiles (ICBMs) and bombers. START negotiated the largest and most complex arms control treaty in history, and its final implementation in late 2001 resulted in the removal of about 80 percent of all strategic nuclear weapons then in existence. Proposed by United States President Ronald Reagan, it was renamed START I after negotiations began on the second START treaty.

The START I treaty expired 5 December 2009. On 8 April 2010, the replacement New START treaty was signed in Prague by U.S. President Obama and Russian Prime minister Medvedev. Following ratification by the U.S. Senate and the Federal Assembly of Russia, it went into force on 26 January 2011. 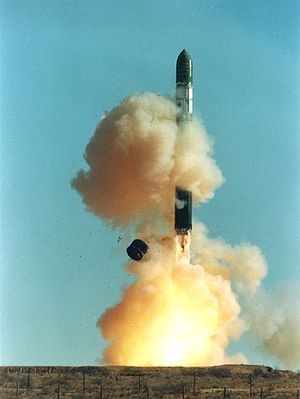 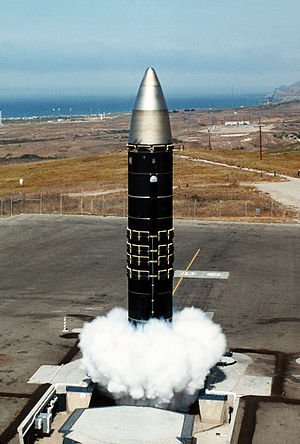 The START proposal was first announced by United States President Ronald Reagan in a commencement address at his alma mater, Eureka College on 9 May 1982,[2] and presented by President Ronald Reagan in Geneva on 29 June 1982. Reagan proposed a dramatic reduction in strategic forces in two phases, which he referred to as SALT III at the time.[3] The first phase would reduce overall warhead counts on any missile type to 5,000, with an additional limit of 2,500 on ICBMs. Additionally, a total of 850 ICBMs would be allowed, with a limit of 110 "heavy throw" missiles like the SS-18, with additional limits on the total "throw weight" of the missiles as well. The second phase introduced similar limits on heavy bombers and their warheads, and other strategic systems as well.

At the time the US had a commanding lead in strategic bombers. The US B-52 force, while aged, was a credible strategic threat but was only equipped with AGM-86 cruise missiles, beginning in 1982, because of Soviet air defense improvements in early 1980s. The US also had begun to introduce new B-1B Lancer quasi-stealth bomber and was secretly developing the Advanced Technology Bomber (ATB) project that would eventually result in the B-2 Spirit stealth bomber. The USSR's force was of little threat to the US, on the other hand, as it was tasked almost entirely with attacking US convoys in the Atlantic and land targets on the Eurasian landmass. Although the USSR had 1,200 medium and heavy bombers, only 150 of them (Tupolev Tu-95s and Myasishchev M-4s) could reach North America (the latter only with in-flight refueling). They also faced difficult problems in penetrating admittedly smaller and less heavily defended US airspace. Possessing too few bombers available when compared to US bomber numbers was evened out by the US forces having to penetrate the much larger and heavier defended Soviet airspace. This changed when new Tu-95MS and Tu-160 bombers appeared in 1984 equipped with the first Soviet AS-15 cruise missiles. By limiting the phase-in as it was proposed, the US would be left with a strategic advantage, for a time.

As Time magazine put it at the time, "Under Reagan's ceilings, the U.S. would have to make considerably less of an adjustment in its strategic forces than would the Soviet Union. That feature of the proposal will almost certainly prompt the Soviets to charge that it is unfair and one-sided. No doubt some American arms-control advocates will agree, accusing the Administration of making the Kremlin an offer it cannot possibly accept—a deceptively equal-looking, deliberately nonnegotiable proposal that is part of what some suspect is the hardliners' secret agenda of sabotaging disarmament so that the U.S. can get on with the business of rearmament." However, Time did point out that, "The Soviets' monstrous ICBMs have given them a nearly 3-to-1 advantage over the U.S. in "throw weight"—the cumulative power to "throw" megatons of death and destruction at the other nation."

Continued negotiation of the START process was delayed several times because US agreement terms were considered non-negotiable by pre-Gorbachev Soviet rulers. President Reagan's introduction of the Strategic Defense Initiative (SDI) program in 1983 was viewed as a threat by the Soviet Union, and the Soviets withdrew from setting a timetable for further negotiations. Due to these facts, a dramatic nuclear arms race proceeded during the 1980s, and essentially ended in 1991 by nuclear parity preservation at a level of more than ten thousand strategic warheads on both sides.

365 B-52s were flown to the Aerospace Maintenance and Regeneration Center at Davis-Monthan Air Force Base in Arizona.[when?] The bombers were stripped of all usable parts, then chopped into five pieces by a 13,000-pound steel blade dropped from a crane. The guillotine sliced four times on each plane, severing the wings and leaving the fuselage in three pieces. The ruined B-52s remained in place for three months so that Russian satellites could confirm that the bombers had been destroyed, after which they were sold for scrap.[6]

"It remains in effect between the U.S. and Russia, Belarus, Kazakhstan, and Ukraine. The latter three became non-nuclear weapons states under the Treaty on the non-proliferation of Nuclear Weapons of 1 July 1968 (NPT) as they committed to do under the Lisbon Protocol (Protocol to the Treaty Between the United States of America and the Union of Soviet Socialist Republics on the Reduction and Limitation of Strategic Offensive Arms) after becoming independent nations in the wake of the breakup of the Soviet Union."[7][8]

Belarus, Kazakhstan and Ukraine have disposed of all their nuclear weapons or transferred them to Russia, while the U.S. and Russia have reduced the capacity of delivery vehicles to 1,600 each, with no more than 6,000 warheads.[9]

A report by the US State Department called "Adherence to and Compliance With Arms Control, Nonproliferation and Disarmament Agreements and Commitments" which was released on July 28, 2010, stated that Russia was not in full compliance with the treaty when it expired on 5 December 2009. The report did not specifically identify Russia's compliance issues.[10] 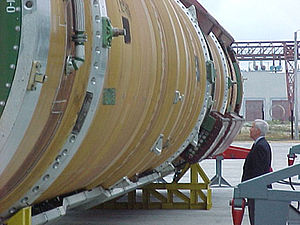 START I expired 5 December 2009. Both sides agreed to continue observing the terms of the treaty until a new agreement is reached.[11] There are proposals to renew and expand the treaty, supported by U.S. President Barack Obama. Sergei Rogov, director of the Institute of the U.S. and Canada, said: "Obama supports sharp reductions in nuclear arsenals and I believe that Russia and the U.S. may sign in the summer or fall of 2009 a new treaty that would replace START-1". He added that a new deal would only happen if Washington abandoned plans to place elements of a missile shield in central Europe. He expressed willingness "to make new steps in the sphere of disarmament," however, saying they were waiting for the U.S. to abandon attempts to "surround Russia with a missile defense ring." This referred to the placement of ten interceptor missiles in Poland, as well as an accompanying radar in the Czech Republic.

Russian President Dmitri Medvedev, said, the day after the U.S. elections, in his first state of the nation address, that Russia would move to deploy short-range Iskander missile systems in the western exclave of Kaliningrad "to neutralize if necessary the anti-ballistic missile system in Europe." Russia insists that any movement towards a new START should be a legally binding document, and must, then, set lower ceilings on the number of nuclear warheads, and their delivery vehicles.[9]

On 17 March 2009, Russian President Dmitri Medvedev signaled that Russia would begin a "large-scale" rearmament and renewal of Russia's nuclear arsenal. President Medvedev accused NATO of pushing ahead with expansion near Russian borders and ordered that this rearmament commence in 2011 with increased army, naval, and nuclear capabilities. Additionally, the head of Russia's strategic missile forces, Nikolai Solovtsov, told news agencies that Russia would start deploying its next-generation RS-24 missiles after the 5 December expiry of the START-1 treaty with the United States. Russia hopes to change the START-1 treaty with a new accord. The increased tensions come despite the warming of relations between the United States and Russia in the two years since U.S. President Barack Obama took office.[12]

As of 4 May 2009, the United States and Russia began the process of renegotiating START, as well as counting both nuclear warheads and their delivery vehicles when making a new agreement. While setting aside problematic issues between the two countries, both sides agreed to make further cuts in the number of warheads they have deployed to around 1,000 to 1,500 each. The United States has said they are open to a Russian proposal to use radar in Azerbaijan rather than Eastern Europe for the proposed missile system. The Bush Administration insisted that the Eastern Europe defense system was intended as a deterrent for Iran, while the Kremlin feared that it could be used against Russia. The flexibility by both sides to make compromises now will lead to a new phase of arms reduction in the future.[13]

A 'Joint understanding for a follow-on agreement to START-1' was signed by Presidents Barack Obama and Dmitri Medvedev in Moscow on 6 July 2009. This will reduce the number of deployed warheads on each side to 1,500–1,675 on 500–1,100 delivery systems. A new treaty was to be signed before START-1 expired in December 2009 and the reductions are to be achieved within seven years.[14] After many months of negotiations,[15][16] Presidents Obama and Medvedev signed the successor treaty, Measures to Further Reduction and Limitation of Strategic Offensive Arms, in Prague, Czech Republic on 8 April 2010.

Memorandum of Understanding data for START 1 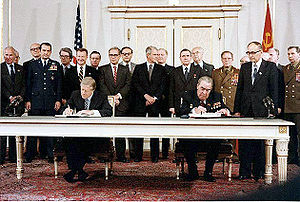