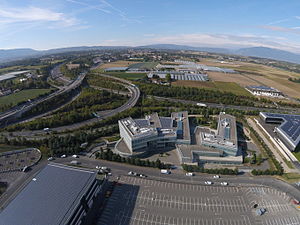 STMicroelectronics was formed in 1987 by the merger of semiconductor companies SGS Microelettronica (Società Generale Semiconduttori) of Italy and Thomson Semiconducteurs, the semiconductor arm of France's Thomson. At the time of the merger the company was known as SGS-THOMSON but took its current name in May 1998 following the withdrawal of Thomson SA as an owner.

Thomson Semiconducteurs was created in 1982 by the French government's widespread nationalisation of industries. It included:

After its creation by merger in 1987, SGS-Thomson was ranked 14th among the top 20 semiconductor suppliers with sales of around US$850 million. The company has participated in the consolidation of the semiconductor industry since its formation, with acquisitions including:

On December 8, 1994, the company completed its initial public offering on the Paris and New York stock exchanges. Owner Thomson SA sold its stake in the company in 1998 when the company also listed on the Borsa Italiana in Milan.

In 2002, Motorola and TSMC joined ST and Philips in a new technology partnership. The Crolles2 Alliance was created with a new 12" wafer manufacturing facility located in Crolles (France).

By 2005, STMicroelectronics was ranked fifth, behind Intel, Samsung, Texas Instruments and Toshiba, but ahead of Infineon, Renesas, NEC, NXP, and Freescale. The company was the largest European semiconductors supplier, ahead of Infineon and NXP (see Semiconductor sales leaders by year).

Early in 2007, NXP (formerly Philips Semiconductors) and Freescale (formerly Motorola Semiconductors) decided to stop their participation in Crolles2 Alliance. Under the terms of the agreement the Alliance came to an end on December 31, 2007.[5]

On May 22, 2007, ST and Intel created a joint venture in the memory application called Numonyx. This new company merged ST and Intel Flash Memory activities.

Semiconductor market consolidation continued with ST and NXP announcing on April 10, 2008, the creation of a new joint venture of their mobile activities, with ST owning 80% of the new company and NXP 20%. This joint venture began on August 20, 2008.

In 2011, STMicroelectronics announced the creation of a joint lab with Sant'Anna School of Advanced Studies. The lab will focus on research and innovation in bio-robotics, smart systems and microelectronics.[6] Past collaborations with Sant'Anna School of Advanced Studies included DustBot, a platform that integrated self-navigating "service robots" for waste collection.[6]

ST Ericsson was a multinational manufacturer of wireless products and semiconductors, supplying to mobile device manufacturers.[7] ST-Ericsson was a 50/50 joint venture of Ericsson and STMicroelectronics established on 3 February 2009 and dissolved 2 August 2013. Headquartered in Geneva, Switzerland, it was a fabless company, outsourcing semiconductor manufacturing to foundry companies.

Following an earlier failure, STMicroelectronics has stayed out of the volatile markets for DRAM and PC microprocessors. In 1994, it attempted to launch compatible Intel 80486 microprocessors in partnership with American company Cyrix. One model only was completed, the 1995 Cyrix M1 microprocessor, which was intended to compete with Intel's Pentium family.[citation needed]

It did achieve some success, however, in the PC-compatible x86 embedded systems market with its STPC SoC line, culminating in the 486-class STPC Atlas, which reached end-of-life in 2008.

Unlike so-called fabless semiconductor companies, STMicroelectronics owns and operates its own semiconductor wafer fabs. The company owned five 8 inch (200 mm) wafer fabs and one 12 inch (300 mm) wafer fab in 2006.[citation needed] Most of the production is scaled at 0.18 µm, 0.13 µm, 90 nm and 65 nm (measurements of transistor gate length). STMicroelectronics also owns back-end plants, where silicon dies are assembled and bonded into plastic or ceramic packages. [8]

Grenoble is one of the company's most important R&D centres, employing around 6,000 staff. The Polygone site employs 2200 staff and is one of the historical bases of the company (ex SGS). All the historical wafer fab lines are now closed but the site hosts the headquarters of many divisions (marketing, design, industrialization) and an important R&D center, focused on silicon and software design and fab process development.

The Crolles site hosts a 200 mm (8 in) and a 300 mm (12 in) fab and was originally built as a common R&D center for submicrometre technologies as part of the 1990 Grenoble 92 partnership between SGS-Thomson and CNET, the R&D center of French telecom company France Telecom. The 200 mm (8 in) fab, known as Crolles 1, is the company's first and was built as part of a 1991 partnership between SGS-Thomson and Philips to develop new manufacturing technologies. Crolles 1 was opened on September 9, 1993 by Gérard Longuet, French minister for industry.

The 300 mm (12 in) fab was inaugurated by French president Jacques Chirac, on February 27, 2003. It includes a R&D center which focuses on developing new nanometric technology processes for 90 nm to 32 nm scale using 300 mm (12 in) wafers and it was developed for The Crolles 2 Alliance'. This alliance of STMicroelectronics, TSMC, NXP Semiconductors (formerly Philips semiconductor) and Freescale (formerly Motorola semiconductor) partnered in 2002 to develop the facility and to work together on process development. The technologies developed at the facility were also used by global semiconductor foundry TSMC of Taiwan, allowing TSMC to build the products developed in Crolles on behalf of the Alliance partners who required such foundry capacity. A new fab is under construction since 2015.

The site opened in 1979 as a 100 mm (3.9 in) fab operated by Eurotechnique, a joint venture between Saint Gobain of France and National Semiconductor of the US. Rousset was sold to Thomson-CSF in 1982 as part of the French government's 1981-82 nationalization of several industries. As part of the nationalisation, a former Thomson plant in the center of Aix-en-Provence operating since the 1960s was closed and staff were transferred to the new Rousset site. The original 100 mm (4 in) fab was upgraded into 130 mm (5 in) and later 150 mm (6 in) fab in 1996. It is now being shut down.

In 1988, a small group of employees from the Thomson Rousset plant (including the director, Marc Lassus) founded a start-up company, Gemalto (formerly known as Gemplus) which became a leader in the smartcard industry.

Employing 6,000 staff, the Milan facilities match Grenoble in importance. Agrate Brianza (map), employs around 4000 staff and is a historical base of the company (ex SGS). The site has several fab lines (including an 200 mm (8 in) fab) and an R&D center. Castelletto, employs 300 to 400 staff and hosts some divisions and R&D centers.

Update-2012: Numonyx JV (with Intel) is acquired by Micron As such, R2 Fab (Agrate previous R&D 200mm Fab) is currently a Micron entity

The Catania plant in Sicily employs 5,000 staff and hosts several R&D centers and divisions, focusing on flash memory technologies as well as two fabs. The plant was launched in 1961 by ATES to supply under licensing to RCA of the US and initially using Germanium. The site's two major wafer fabs are an 200 mm (8 in) fab, opened in April 1997 by Romano Prodi, president of the Italian council and a 300 mm (12 in) fab that has never been completed and which was transferred in its current state to Numonyx in 2008.

ST employs some 1,500 people in Malta, making it the largest private sector employer. It is also the country's leading exporter.[9]

In 1970, SGS created its first assembly back-end plant in Singapore, in the area of Toa Payoh. Then in 1981, SGS decided to build a wafer fab in Singapore. The Singapore technical engineers have been trained in Italy and the fab of Ang Mo Kio started to produce its first wafers in 1984. Converted up to 200 mm (8 in) fab, this is now an important 200 mm (8 in) wafer fab of the group. Ang Mo Kio also hosts some design centers. The site currently employs 6000 staff.[citation needed]

The Casablanca, Morocco site consists of two assembly parts (Bouskoura and Aïn Sebaâ) and totals around 4000 employees. It was opened in the 1960s by Thomson.

The Bristol, United Kingdom site (approx. 150 employees) is scheduled to ramp down and close by early 2014.

STMicroelectronics is involved in a project to produce plastic solar cells that employ a matrix of carbon nanotubes to convert photons to electrical power.[16]