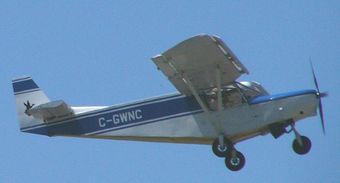 A short takeoff and landing (STOL) aircraft is an aircraft with short runway requirements for takeoff and landing. Many STOL-designed aircraft also feature various arrangements for use on runways with harsh conditions (such as high altitude or ice). STOL aircraft, including those used in scheduled passenger airline operations, have also been operated from STOLport airfields which feature short runways. 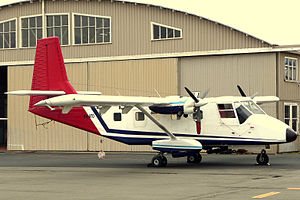 Many fixed-wing STOL aircraft are bush planes, though some, like the De Havilland Canada Dash-7, are designed for use on prepared airstrips; likewise, many STOL aircraft are taildraggers, though there are exceptions like the PAC P-750 XSTOL, Quest Kodiak, De Havilland Canada DHC-6 Twin Otter and the Peterson 260SE. Autogyros also have STOL capability, needing a short ground roll to get airborne, but capable of a near-zero ground roll when landing.[citation needed]

Runway length requirement is a function of the square of the minimum flying speed (stall speed), and most design effort is spent on reducing this number. For takeoff, large power/weight ratios and low drag help the plane to accelerate for flight. The landing run is minimized by strong brakes, low landing speed, thrust reversers or spoilers (less common). Overall STOL performance is set by the length of runway needed to land or take off, whichever is longer.[citation needed]

Of equal importance to short ground run is the ability to clear obstacles, such as trees, on both take off and landing. For takeoff, large power/weight ratios and low drag result in a high rate of climb required to clear obstacles. For landing, high drag allows the aeroplane to descend steeply to the runway without building excess speed resulting in a longer ground run. Drag is increased by use of flaps (devices on the wings) and by a forward slip (causing the aeroplane to fly somewhat sideways through the air to increase drag).[citation needed]

Normally, a STOL aircraft will have a large wing for its weight. These wings often use aerodynamic devices like flaps, slots, slats, and vortex generators.[1] Typically, designing an aircraft for excellent STOL performance reduces maximum speed, but does not reduce payload lifting ability. The payload is critical, because many small, isolated communities rely on STOL aircraft as their only transportation link to the outside world for passengers or cargo; examples include many communities in the Canadian north and Alaska.[citation needed]

Most STOL aircraft can land either on- or off-airport. Typical off-airport landing areas include snow or ice (using skis), fields or gravel riverbanks (often using special fat, low-pressure tundra tires), and water (using floats): these areas are often extremely short and obstructed by tall trees or hills. Wheel skis and amphibious floats combine wheels with skis or floats, allowing the choice of landing on snow/water or a prepared runway.[citation needed] 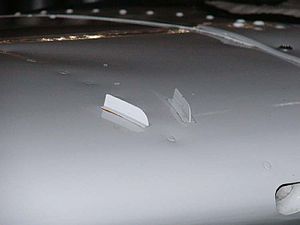 A number of aircraft modification companies offer STOL kits that can be installed on aircraft to improve their short field performance.

A STOLport is an airport designed with STOL operations in mind, normally having a short single runway.[11][12]

STOLports are not common but can be found, for example, at London City Airport in London, United Kingdom. Some sparsely populated countries have several, e.g. Norway and Greenland. There were also several STOLports in the United States that were used for scheduled passenger airline operations but are now no longer in existence.

"STOL (Short Take Off and Landing). STOL performance of an aircraft is the ability of aircraft to take off and clear a 50-foot obstruction in a distance of 1,500 feet from beginning the takeoff run. It must also be able to stop within 1,500 feet after crossing a 50-foot obstacle on landing."

"An aircraft that, at some weight within its approved operating weight, is capable of operating from a STOL runway in compliance with the applicable STOL characteristics and airworthiness, operations, noise, and pollution standards" and ""aircraft" means any machine capable of deriving support in the atmosphere"

"A STOL aircraft is an aircraft with a certified performance capability to execute approaches along a glideslope of 6 degrees or steeper and to execute missed approaches at a climb gradient sufficient to clear a 15:1 missed approach surface at sea level... A STOL runway is one which is specifically designated and marked for STOL aircraft operations, and designed and maintained to specified standards."

"Heavier-than-air craft that cannot take off and land vertically, but can operate within areas substantially more confined than those normally required by aircraft of the same size. Derived from short takeoff and landing aircraft."

"short takeoff and landing aircraft (STOL), heavier-than-air craft, capable of rising from and descending to the ground with only a short length of runway, but incapable of doing so vertically. The precise definition of an STOL aircraft has not been universally agreed upon. However, it has been tentatively defined as an aircraft that upon taking off needs only 1,000 ft (305 m) of runway to clear a 50-ft (15-m) obstacle at the end of that distance and upon landing can clear the same obstacle and then land within 1,000 ft."

"The STOL mode of flight is one during which an airplane taking off or landing is operated at climb-out and approach speeds lower than the conventionally accepted margins of airspeed above the power-off stalling speed of the airplane."

Additionally some aircraft manufacturers market their products as STOL, without providing evidence that the aircraft meets any accepted definition.[24]