STS-2 was the second Space Shuttle mission conducted by NASA, and the second flight of the orbiter Columbia. The mission launched on 12 November 1981 and landed two days later on 14 November.[1] STS-2 marked the first time in history that a manned, reusable orbital vehicle returned to space for a second time.[2]

In the early planning stages of the Space Shuttle program, STS-2 was intended to be a reboost mission for the aging Skylab space station. However, such a mission was impeded by delays with the shuttle's development and the deteriorating orbit of Skylab. Skylab ultimately de-orbited on 11 July 1979, two years before the launch of STS-2.[3]

Engle had been the original selection as Lunar Module Pilot for Apollo 17, but was bumped in favor of Harrison Schmitt when it became clear that the mission would be the last lunar landing. As a consequence, both Engle and Truly were rookies during STS-2 (Engle had flown the X-15 above 80 kilometres (50 mi) and so had earned USAF astronaut wings, but was still considered a NASA rookie), constituting the first all-rookie crew since Skylab 4. Engle and Truly had also served as one of the two shuttle crews during the ALT program in 1977. Following STS-2, NASA policy held that the commander had to be an astronaut who had already flown in space[citation needed], making this the last all-rookie crew of a NASA mission. 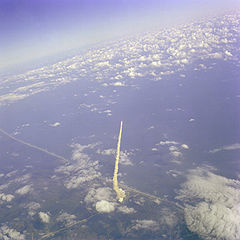 Aerial view of Columbia's launch from Pad 39A at the Kennedy Space Center in Florida.

The second Space Shuttle mission launched from Kennedy Space Center on 12 November 1981, with liftoff occurring at 10:10 am EST, 7 months after STS-1. The planned launch time of 7:30 am was delayed while a faulty data transmitting unit on Columbia was replaced with one from Challenger, which had been shipped overnight from Palmdale, California where Challenger was still under construction.

Originally, the launch had been set for 9 October, but it was delayed by a nitrogen tetroxide spill during the loading of the forward Reaction Control System tanks. The spill necessitated the removal, decontamination and reapplication of over 300 thermal tiles. The tiles could be reached from platforms at Launch Pad 39A, allowing the work to take place without destacking Columbia and returning it to the Orbiter Processing Facility. It was next scheduled for 4 November, but was again scrubbed when high oil pressures were discovered in two of the three Auxiliary Power Units (APU) that controlled the orbiter's hydraulic system. That issue was attributed to hydrazine seepage contaminating the lubrication system in the APUs.

The flight marked the first time an orbital manned space vehicle had been re-flown with a second crew. Prior to launch, Columbia spent 103 days in the Orbiter Processing Facility. It again carried the DFI package, as well as the OSTA-l payload – named for the NASA Office of Space and Terrestrial Applications – which consisted of a number of remote-sensing instruments mounted on a Spacelab pallet in the payload bay. These instruments, including the Shuttle Imaging Radar-A (SIR-A), successfully carried out remote sensing of Earth's resources, environmental quality, and ocean and weather conditions.[5] In addition, the Canadian-built "Canadarm" Remote Manipulator System (RMS) was successfully operated in all its various operating modes for the first time.

During the mission, the Mission Control Center was visited by President Ronald Reagan. He was supposed to visit during STS-1, but was forced to cancel due to an assassination attempt on 30 March 1981.

Although the STS-2 mission had been planned for a duration of five days, with a few hours a day spent testing the Canadarm, the flight was cut short when one of the three fuel cells that produced electricity and drinking water failed. The mission was shortened to two days, and the Canadarm tests were canceled. The crew stayed awake during a scheduled sleep period and tested the arm anyway, working during the Loss-Of-Signal (LOS) periods when they were not in contact with Mission Control.[6] The deorbit and reentry phase of this mission differed from STS-1, in that while the first shuttle entry was flown as a "middle of the road" test of the automatic guidance, the success of that mission allowed for the STS-2 crew to explore the stability margins of the vehicle's performance. Twenty-nine planned Programmed Test Inputs (PTIs) were manually flown in the Control Stick Steering (CSS) mode, with Engle making use of his past experience in the X-15. These PTIs provided useful data for subsequent engineering modifications.[6]

Despite the truncated flight, more than 90 percent of the mission's objectives were achieved.[6] Moreover, modifications of the water sound suppression system at the pad to absorb the solid rocket booster overpressure wave during launch were effective; no tiles were lost and only 12 were damaged. Columbia was flown back to the Kennedy Space Center on 25 November 1981.

STS-2 was the first shuttle flight where O-ring blow-by was observed. After the damage was discovered, another O-ring was intentionally damaged to a further degree. It was then put through a flight simulation at three times the flight pressure. It survived the test, and was endorsed as flightworthy. This same problem would occur on fourteen more shuttle flights, before contributing to the loss of orbiter Challenger in 1986.

STS-2 was the last shuttle flight to have its external fuel tank (ET) painted white. In an effort to reduce the Shuttle's overall weight, STS-3 and all subsequent missions used an unpainted tank, saving approximately 272 kilograms (600 lb).[7] This lack of paint gave the ET a distinctive orange color, which eventually became emblematic of the Space Shuttle.

The patch notes the names of the mission's two crew members, and includes an image of a bald eagle, the national bird of the United States, decorated with the colors of the US flag.

NASA began a tradition of playing music to astronauts during the Gemini program, and first used music to wake up a flight crew during Apollo 15.[8]