From Infogalactic: the planetary knowledge core
Jump to: navigation, search
This article is about the Caribbean island. For the Malaysian state, see Sabah. For the ancient civilization, see Sabaeans. For other uses, see Saba (disambiguation).

Saba (/ˈsɑːbə/) is a Caribbean island and the smallest special municipality (officially public body) of the Netherlands.[4] It consists largely of the potentially active volcano Mount Scenery, at 887 metres (2,910 ft) the highest point of the entire Netherlands.

Saba has a land area of 13 square kilometres (5.0 sq mi). As of January 2013[update], the population was 1,991 inhabitants, with a population density of 150 inhabitants per square kilometre (390/sq mi).[1] Its towns and major settlements are The Bottom (the capital), Windwardside, Hell's Gate and St. Johns.

The origin of the name "Saba" is often believed to be derived from the Arawak Indian word for "rock," which was "siba."

Christopher Columbus is said to have sighted the island on 13 November 1493. He did not land, being deterred by the island's perilous rocky shores. In 1632, a group of shipwrecked Englishmen landed upon Saba. They stated they found the island uninhabited when they were rescued. There has been clear evidence found indicating that Caribs and Arawak Indians have been on the island.

In 1635, a stray Frenchman claimed Saba for Louis XIII of France. In the latter 1630s, the Dutch Governor of the neighboring island of Sint Eustatius sent several Dutch families over to colonize the island for the Dutch West India Company. These Dutch family names included Heyliger, Leverock, Zagers, and Vanderpool, to name just four. In 1664, refusing to swear allegiance to the English crown, these original Dutch settlers were evicted to St. Maarten by Thomas Morgan and other English pirates that had been convicted to stay on Jamaica, to return within the months and years following. The Netherlands have been in continuous possession of Saba since 1816, after numerous flag changes (British-Dutch-French) during the previous centuries.[citation needed] In 2016 the island has been French for 12 years, English for 18 years and Dutch for 345 years.

In the 17th and 18th centuries Saba's major industries were sugar, indigo and rum produced on plantations owned by Dutchmen living on St Eustatius, and later fishing, particularly lobster fishing. In the 17th century Saba was believed to be a favorable hideout for Jamaican pirates. England also deported its "undesirable" people to live in the Caribbean colonies, and some of them also became pirates, a few taking haven on Saba. The island of Saba is forbidding and steep, a natural fortress, and so the island became a private sanctuary for the families of smugglers and pirates. The most notable native Saban pirate was Hiram Beakes, who famously quipped, "Dead men tell no tales".[citation needed]

Later, legitimate sailing and trade became important, and many of the island's men took to the sea, during which time Saba lace, (Spanish needlework introduced by a nun coming from Venezuela) pulled thread work, became an important product made by the island's women. During this period of time, with most of the island's men gone out to sea, the island became known as "The Isle of Women".[citation needed]

The remains of the settlements of 1630–40 can be found on the west side at Tent Bay. These settlements were destroyed by a landslide in the 17th century.

A status referendum was held in Saba on 5 November 2004. 86.05% of the population voted for closer links to the Netherlands. 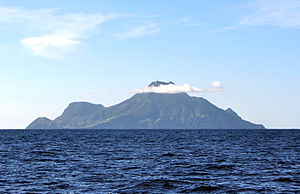 Saba island as viewed from the north, with Mount Scenery's peak in the clouds.

Saba consists largely of the potentially active volcano Mount Scenery. At 887 metres (2,910 ft) the volcano is the highest point within the Kingdom of the Netherlands.

The vegetation of Saba is mainly composed of woodland forest with ferns and damp soil, and many mango trees. Visitors refer to Saba's forests as "the Elfin Forest" because of its high altitude mist, and mossy appearance. A woodland reserve was created and named "Elfin Forest Reserve". Saba's lush plant and animal wildlife is diverse and is cared for by the Saba Conservation Foundation.

There used to be forests of Mountain Mahogany trees until a hurricane in the 1960s destroyed many of the trees, which are Freziera undulata in the family Theaceae. Despite the common name these trees are not related to other Mahogany species. One species of true mahogany tree is found planted on the island at lower levels, and that is the small-leaved mahogany Swietenia mahagoni, Meliaceae. The native mahogany trees are considered to be at risk of becoming extinct on Saba.

4.3 kilometres (2.7 mi) southwest of Saba is the edge of the Saba Bank, a very large submerged atoll with especially rich biodiversity. Saba Bank is the top of a sea mount and it is a prime fishing ground, particularly for lobster.

A non-governmental conservation organization, Saba Conservation Foundation, helps protect the nature and culture of the island. 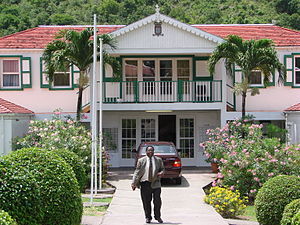 As Saba is now part of the Netherlands (after becoming a Netherlands public body), the island recognises and performs same-sex marriage. The first gay marriage was performed in 2012.[6] 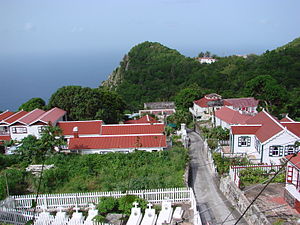 The population of Saba (the Sabans) consists of 1,991 people who come from all over the world. Saba's small size has led to a fairly small number of island families, who can trace their last names back to around a half-dozen families. This means that many last names are shared around the island, the most numerous being Hassell and Johnson.

Most families are an intermixing of Dutch, English, Scottish, and African heritage. The population is also descended from the Irish who were exiled from that country after the accession of King Charles I of England in 1625. Charles exiled these Irish to the Caribbean in an effort to quell rebellion after he had forcibly procured their lands for his Scottish noble supporters.

Historically, Saba was traded among the many European nations that fought for power in the region. Slaves were also imported to work on Saba. In recent years Saba has become home to a large group of expatriates, and around 250 immigrants who are either students or teachers at the Saba University School of Medicine.

Both English and Dutch are spoken on the island and taught in schools, and both languages are official. Despite the island's Dutch affiliation, English is the principal language spoken on the island and has been used in its school system since the 19th century. English can therefore be used in communications of and to the government.[2] Saba English, a form of Virgin Islands Creole English, is the local vernacular.

Although in the beginning Sabans were Protestant now they are mostly Roman Catholic. There is also a Wesleyan Church Holiness community on the island. Other religions practiced on the island include Jehovah's Witnesses, Anglican, Seventh-day Adventist, Hindu, Muslim, and Jewish faiths.

Saba is home to the Saba University School of Medicine, which was established by American expatriates in coordination with the government of the Netherlands. The school adds over 400 residents when classes are in session, and it is the prime educational attraction. A.M. Edwards Medical Center is the major provider of healthcare for local residents.

Since 2011 the U.S. dollar has been the official currency,[7] replacing the Netherlands Antillean guilder.

Agriculture on Saba is primarily livestock and vegetables, especially potatoes. Saba lace, also known as "Spanish work", is actually drawn thread work, and as of 2013, it is still produced on the island. 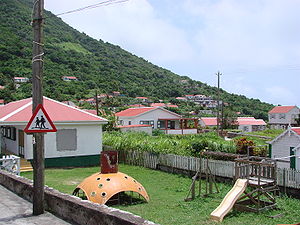 A playground on Saba

The tourism industry now contributes more to the island's economy than any other sector. There are about 25,000 visitors each year. Saba has a number of inns, hotels, rental cottages and restaurants. Saba is known as "The Unspoiled Queen" of the Caribbean.[8] Saba is especially known for its ecotourism, having exceptional scuba diving, climbing and hiking.

The Juancho E. Yrausquin Airport offers flights to and from the nearby islands of St. Maarten and Sint Eustatius. There is also a ferry service from St. Maarten; the ferry boats "Dawn II ~ The Saba Ferry" and "The Edge" both travel to Saba three times a week. In addition, there are anchorages for private boats.[8]

About 150 species of fish have been found in Saba’s waters.[9] A main draw for divers are the pinnacle dive sites, where magma pushed through the sea floor to create underwater towers of volcanic rock that start at about 300 feet (91 m) down and rise to about 85 feet (26 m) beneath the surface.[9] The waters around Saba were designated as the Saba National Marine Park in 1987, and are subject to government regulation to preserve the coral reefs and other marine life. The Saba Conservation Foundation has operated a hyperbaric chamber in case of diving emergencies, since 1991.[10] 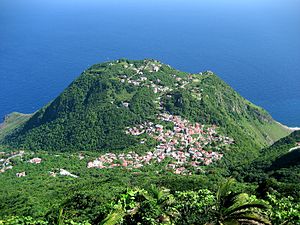 A view of the village of Windwardside, taken from Mount Scenery.

There is one main road, known as "The Road". Its construction was masterminded by Josephus Lambert Hassell who despite the common opinion of Dutch and Swiss engineers believed that a road could be built.[11] He took a correspondence course in civil engineering and started building the road with a crew of locals in 1938.[12]

After five years of work the first section of the road from Fort Bay to The Bottom was completed. It was not until 1947 that the first motor vehicle arrived. In 1951 the road to Windwardside and St. Johns was opened and in 1958, the road was completed. Driving "The Road" is considered to be a daunting task, and the curves in Windwardside are extremely difficult to negotiate. Driving is on the right hand side.

In 1963[citation needed] Saba residents built the Juancho E. Yrausquin Airport. This 400-metre (1,300 ft) landing strip is reputed to be the shortest commercial runway in the world,[13] and is restricted. Only trained pilots flying small STOL airliners, such as the Twin Otter and the Britten-Norman Islander may land there, as well as helicopters. Consistent air service from Sint Maarten and Sint Eustatius is available through Winair.

In 1972, a pier was completed in Fort Bay to access the island. Travel is also provided by ferry services to and from Sint Maarten with the Dawn II and The Edge.

Of note are 800 steps carved from stone that reach from Ladder Bay to the settlement known as The Bottom. Until the late 20th century, everything that was brought to the island was carried up by hand using these steps. The steps are now often used by tourists who wish to experience an intense climb.

Saba's houses have a cottage look with red roofs. The lifestyle is slow and old-fashioned with little nightlife, even with the emergence of an ecotourism industry in the last few decades. Sabans are proud of their history of environmental conservation, calling Saba “The Unspoiled Queen.”

Saban women continue to make two traditional island products, Saba Lace and Saba Spice. Saba Lace is handstitched lace, which the island's women began making in the late 19th century and built into a thriving mail-order business with the United States. Saba Spice is a rum drink, brewed with a combination of spices.

Another event held in the capital The Bottom is 'Saba Day'. This is the national day of the island in which all offices, schools and stores are closed. The island celebrates its diversity and culture through various activities and parades. The Bottom holds host to a concert at the sports field where local and other Caribbean artists come to perform.

Only a few sports are played on Saba, including volleyball (the Saba Volleyball Association is a member of NORCECA) and basketball.