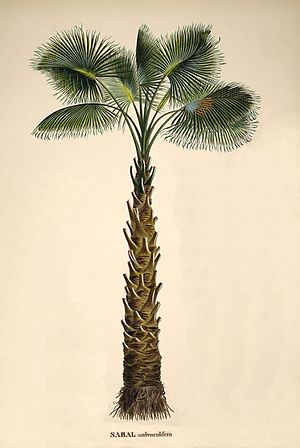 Sabal palmetto, also known as palmetto, cabbage palmetto,[1] blue palmetto,[1] Carolina palmetto,[3] common palmetto,[3] swamp cabbage[4] and sabal palm, is one of 15 species of palmetto palm. It is native to the subtropical Gulf coast and south Atlantic coast of the USA, as well as Cuba,[5] the Turks & Caicos Islands, and The Bahamas.[5][6][7]

In the United States the native range of Sabal palmetto is the coast of the Gulf states and Atlantic states from the Outer Banks of North Carolina to South Carolina and Georgia throughout Florida and is the official state tree of both South Carolina and Florida.

Sabal palmetto grows up to 65 ft (20 m) in height (with exceptional individuals up to 92 ft (28 m) in height, with a trunk up to 2 ft (60 cm) diameter. It is a distinct fan palm (Arecaceae tribe Corypheae), with a bare petiole which extends as a center spine or midrib, (costa) 1/2 to 2/3 the length into a rounded, costapalmate fan of numerous leaflets. A costapalmate leaf has a definite costa (midrib) unlike the typical palmate or fan leaf, but the leaflets are arranged radially like in a palmate leaf. All costapalmate leaves are markedly recurved or arched backwards. Each leaf is 5 to 6.5 ft (1.5–2 m) long, with 40-60 leaflets up to 2.6 ft (80 cm) long.

The flowers are yellowish-white, .20 in (5 mm) across, produced in large compound panicles up to 8.2 ft (2.5 m) long, extending out beyond the leaves. The fruit is a black drupe about .5 in (1.3 cm) long containing a single seed. It is extremely salt-tolerant and is often seen growing near both the Atlantic Ocean coast and the Gulf of Mexico coast.[8]

Sabal palmetto is hardy to USDA zone 8, and has been reported to have some cold hardness down to -13 C (7 F). Maintenance of the Cabbage Palm tree is very easy and very adaptable. The cabbage palmetto is known to tolerate drought, standing water and brackish water. Even though this palm is drought-tolerant, it thrives on regular light watering and regular feeding. It is highly tolerant of salt winds, but not saltwater flooding.[9]

The cabbage-like terminal bud has been eaten as hearts of palm. The bristles on the sheaths of young leaves have been made into scrubbing brushes. The trunks have been used as wharf piles. On June 28, 1776, Charleston patriots under William Moultrie made a fort of palmetto trunks and from it defended successfully against the British in the Revolutionary War.[10]

Sabal palmetto is a popular landscape plant known for its tolerance of salt spray and cold. Because of their relatively long establishment period and prevalence on ranchlands, few, if any are grown from seed in nurseries. Instead, established plants are dug in the wild with small rootballs since virtually all the severed roots die and must be replaced by new roots in the new location. Most leaves are removed at this time to reduce transpiration. It is the state tree of South Carolina and Florida. Most references rate the species as hardy to USDA hardiness zone 7b. They have been successfully grown as far north as southern Delaware. Cabbage palms have excellent hurricane resistance, but are frequently over-pruned for a variety of reasons.

The growing heart of the new fronds, also known as the terminal bud, gives the tree its "cabbage" name, since this is extracted as a food and tastes like other undifferentiated plant meristem tissue, such as the heart of a cabbage or artichoke. It is one of several palm species that is sometimes used to make heart of palm salad. Heart of palm was commonly eaten by Aboriginal Americans. However, extracting the heart will kill this species of palm, because the terminal bud is the only point from which the palm can grow and without this bud the palm will not be able to replace old leaves and will eventually die.

The cabbage palm is remarkably resistant to fire, floods, coastal conditions, cold, high winds and drought. Despite this, alarming causes of recent mortality include rising sea level (most noticed on the Big Bend Coast of Florida), and Texas phoenix palm decline (TPPD) a phytoplasma currently found on the west coast of Florida.

Sabal palmetto trunks appear in two different conditions, which can be confusing (see photo). When leaves die, the leaf bases typically persist for a while, creating a spiky, "basketweave" effect. These remnant leaf bases are called "bootjacks" or "boots", for short. The name stems from the "Y" shape that was reminiscent of devices used to aid individuals in removing boots. Transplanted palms are sometimes deliberately shorn of these bootjacks. Taller specimens are more likely to have lost their bootjacks and appear relatively smooth and columnar. The loss of bootjacks is a natural, if poorly understood, phenomenon as the palm does not create a leaf abscission zone so the loss of the leaf bases results from some other physical or biological process. 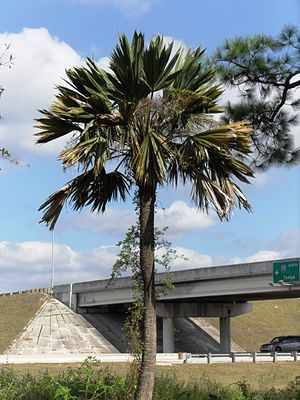 Recently, a new mutant form of Sabal palmetto has been discovered in South West Florida, and named as a cultivar Sabal palmetto 'Lisa'. The difference between the 'Lisa' and the wild-type Sabal palmetto is in the form of the leaf. The 'Lisa' has leaves that are costapalmate, acute, not pendulous, not filamentose, rigid, not strongly divided, cupped, and slightly undulating. This mutation of Sabal palmetto is beginning to be seen in the nursery trade, as it is just as hardy to cold, salt, drought, fire and wind as the wild type of the species, but looks different. Two specimens can be seen in Fort Myers, Florida at the intersection of Luckett Road and I-75, and many seeds are collected and distributed from these specimens. Seeds from Sabal palmetto 'Lisa' have a 68% chance of becoming true to type, the other 32% develop as the wild type.[11]

The sabal palmetto is the official state tree of both Florida and South Carolina (the latter is nicknamed "The Palmetto State".

The annual football rivalry game between Clemson and South Carolina is known as the "Palmetto Bowl").

A silhouette of a palmetto (S. palmetto) appears on the official flag of the US State of South Carolina.[12]

Two palmettos (S. palmettos) appear in the official great seal of the US State of Florida [13]

The sabal palmetto has historically been used in the Southeastern United States and the Confederate States of America to represent independence and liberty.