The Boeing had had to abort its landing at Brussels because of an aircraft blocking one of the runways, and tried to climb and circle towards another one. It started banking dangerously, but the attempts to level its wings caused it to spiral rapidly down to the ground, where it crashed on a farm.

The cause of the crash was never established, but is believed to have been a failure of the stabilizer-adjusting mechanism. It remains the deadliest plane crash to occur on Belgian soil, and the first fatal accident involving a 707 in regular passenger service.

Sabena Flight 548, registration OO-SJB, was a Boeing 707 aircraft that crashed en route to Brussels, Belgium, from New York City on February 15, 1961, killing the entire U.S. figure skating team on its way to the World Championships in Prague, Czechoslovakia.[2][3]

The flight originated at Idlewild International Airport (now John F. Kennedy International Airport)[4] and crashed on approach to Brussels' Zaventem Airport. All 72 on board were killed, as well as one person on the ground (Theo de Laet, a farmer, was struck by debris). The crash was the first fatal accident involving a Boeing 707 in regular passenger service, 28 months after it was placed into commercial use.[nb 1] It is also the deadliest plane crash to occur on Belgian soil. [1]

There was no indication of trouble on board the plane until it was forced to cancel its final approach to the Brussels airport, as a small plane had not yet cleared the runway.

Under clear skies at about 10:00 a.m. Brussels time,[5] the Boeing jet was on a long approach to runway 20 when, near the runway threshold and at a height of 900 feet (270 m), power was increased and the landing gear retracted. The airplane attempted to circle and land on another runway, but never made it back to the airport. The plane made three 360 degrees turns to the left. During these turns, the bank angle increased more and more until the aircraft had climbed to 1,500 feet (460 m) and was in a near vertical bank. The 707 then leveled wings, abruptly pitched up, lost speed and started to spiral rapidly nose down towards the ground. It crashed and caught fire in a marshy area adjacent to a farm field near the hamlet of Berg in Kampenhout, less than two miles (3 km) from the airport, at 10:04 a.m. Brussels Time.[6]

The wreckage burst into flames, though it is believed that all 72 aboard were killed instantly. Theo de Laet, a farmer who was working in his fields, was killed by a piece of aluminum debris from the plane, and another farmer's leg was severed by flying debris. A priest who witnessed the troubled plane rushed to the scene but was driven back by the heat of the fire.[5] Baudouin I, King of the Belgians, and his consort, Queen Fabiola, went to the scene of the disaster and provided comfort to the families of the dead and injured farmers. 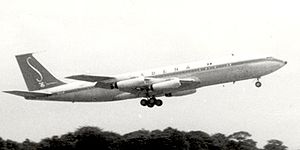 The exact cause of the crash was never determined beyond reasonable doubt. Investigators suspected that the aircraft may have been brought down by a failure of the stabilizer-adjusting mechanism.

The loss of the U.S. team was considered so catastrophic for the international sport that the 1961 World Figure Skating Championships were promptly cancelled.[10][11][12]

In office less than a month, President John F. Kennedy issued a statement of condolence from the White House. He was particularly touched by the disaster; pairs skater Richards was a personal friend of the Kennedy family from summers spent at Hyannis Port, Massachusetts.

Because the casualties included many of the top American coaches as well as the athletes, the crash was a devastating blow to the U.S. Figure Skating program, which had enjoyed a position of dominance in the sport in the 1950s. Although Scott Allen won a bronze medal at the 1964 Winter Olympics – becoming one of the youngest Olympic medalists in history – the United States would not regain prominence in the sport until the 1968 Winter Olympics in Grenoble, France, where Peggy Fleming won gold in the ladies' event and Tim Wood the silver in the men's. The crash was also indirectly responsible for bringing foreign coaches such as Carlo Fassi and John Nicks to the United States. Fleming's coach in 1961 was William Kipp, who was also on the flight.[13]

U.S. Figure Skating President F. Ritter Shumway, in office less than two months at the time of the accident, established the USFS Memorial Fund in honor of the crash victims.[14] The fund, which is still in existence, is used to support the training of promising young figure skaters throughout the country. Olympic gold medalists Fleming and Scott Hamilton credit the fund with being vital to their careers.[citation needed]

A film about the event, called RISE, was commissioned by U.S. Figure Skating to celebrate American figure skating and commemorate the 50th anniversary of the accident.[15] RISE was filmed in 2010 and shown in theaters nationwide for one day only: February 17, 2011, with one encore performance on March 7, 2011.[15] The film was shown on the Versus network on October 22, 2011.