From Infogalactic: the planetary knowledge core
Jump to: navigation, search
Not to be confused with Sabaean.
This article is about the cymbal maker. For the religion, see Sabians. For the professional wrestler, see Sabian (wrestler).

Sabian is a Canadian cymbal designer and manufacturer. It is one of the "big four" manufacturers of cymbals, along with Zildjian, Meinl and Paiste.

The company was founded in 1981 in Meductic, New Brunswick, Canada by Robert Zildjian, son of Avedis Zildjian III, the head of the Avedis Zildjian Company. Family tradition had it that the head of the company would pass the company down to the oldest son (Armand). After Avedis Zildjian III died in 1979, Armand (who was President of Zildjian at the time) became Chairman of the Board. This eventually led to a family feud and a legal dispute between Robert and Armand that resulted in Robert leaving Zildjian to form the rival Sabian company. The companies continue to be rivals, and are both among the world's most popular cymbal brands.

The settlement gave Robert Zildjian the Canadian factory that had been producing the K. Zildjian line. As President of the Zildjian Company, Armand had insisted that the K name remain with his company, while the artisans moved to Robert's company. In the settlement, Robert agreed not to use the Zildjian name or to claim that his cymbals were the same.

Robert Zildjian formed the word Sabian from the two first letters of the names of his three children—Sally, Bill and Andy (a nickname for Armand) and "-ian" (indicating Armenian descent)—and initially released two lines of cymbals, HH and AA, both of them of the traditional bell bronze alloy. As of 2015, Sabian's president is Andy Zildjian, the youngest in the family. 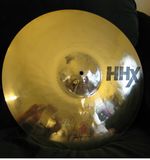 There are also signature cymbals within the other series which are not part of the Vault series, such as the Groove cymbals designed in conjunction with Zoro. Several products Sabian has released include the AA Rocktagon Crashes, the AAX & HHX X-Plosion and O-Zone Crashes, the AAX & HHX X-Treme Chinas, the AAX, HHX, and Xs20 X-Celerator Hi-Hats, and many others. Sabian has also debuted the SR2 series which consists of factory renewed B20 cymbals at a discounted price.