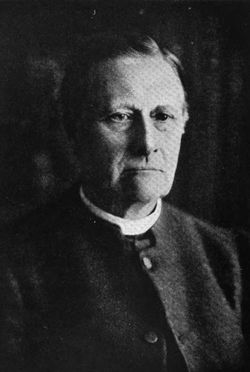 The Reverend Sabine Baring-Gould /ˈsæbˌaɪn ˈbɛərɪŋ ˈɡuːld/ (28 January 1834 – 2 January 1924) of Lew Trenchard in Devon, England, was an Anglican priest, hagiographer, antiquarian, novelist, folk song collector and eclectic scholar. His bibliography consists of more than 1240 publications, though this list continues to grow. His family home, the manor house of Lew Trenchard, near Okehampton, Devon, has been preserved as he had it rebuilt and is now a hotel. He is remembered particularly as a writer of hymns, the best-known being "Onward, Christian Soldiers" and "Now the Day Is Over". He also translated the carol "Gabriel's Message" from the Basque language to English. 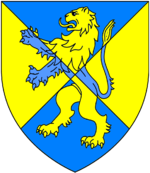 Left: Canting arms of Baring: Azure, a fesse or in chief a bear's head proper muzzled and ringed of the second; right: Arms of Gould: Per saltire azure and or a lion rampant counterchanged;[1]

Sabine Baring-Gould was born in the parish of St Sidwell, Exeter on 28 January 1834.[2] He was the eldest son and heir of Edward Baring-Gould (1804–1872), lord of the manor of Lew Trenchard, a Justice of the Peace and Deputy Lieutenant of Devon, formerly a lieutenant in the Madras Light Cavalry (resigned 1830), by his first wife, Sophia Charlotte Bond, daughter of Admiral Francis Godolphin Bond, Royal Navy.[3] Sabine's paternal grandfather was William Baring (died 1846), JP, DL, who in 1795 had assumed by royal licence the additional surname and arms of Gould, in accordance with the terms of his inheritance of the manor of Lew Trenchard from his mother Margaret Gould, daughter and eventual heiress in her issue of William Drake Gould (1719–1767) of Lew Trenchard. The Gould family was descended from a certain John Gold, a crusader present at the siege of Damietta in 1217 who for his valour was granted in 1220 by Ralph de Vallibus an estate at Seaborough in Somerset.[4] Margaret Gould was the wife of Charles Baring (1742–1829) of Courtland in the parish of Exmouth, Devon, whose monument survives in Lympstone Church, 4th son of Johann Baring (1697–1748), of Larkbeare House, Exeter, a German immigrant apprenticed to an Exeter wool merchant, and younger brother of Sir Francis Baring, 1st Baronet (1740–1810) and John Baring (1730–1816) of Mount Radford, Exeter, which latter two established the London merchant house of John and Francis Baring Company, which eventually became Barings Bank.

Sabine was named after the family of his grandmother, Diana Amelia Sabine (died 1858), wife of William Baring-Gould (died 1846), daughter of Joseph Sabine of Tewin, Hertfordshire and sister of the Arctic explorer General Sir Edward Sabine.[5][6][7] 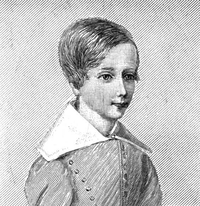 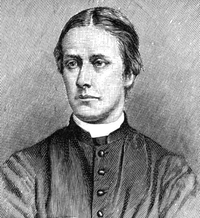 Because the family spent much of his childhood travelling round Europe, most of his education was by private tutors. He only spent about two years in formal schooling, first at King's College School in London (then located in Somerset House) and then, for a few months, at Warwick Grammar School (now Warwick School). Here his time was ended by a bronchial disease of the kind that was to plague him throughout his long life. His father considered his ill-health as a good reason for another European tour.

In 1852 he was admitted to Cambridge University, earning the degrees of Bachelor of Arts in 1857, then Master of Arts in 1860 from Clare College, Cambridge.[8] In September 1853 he informed Nathaniel Woodard of his desire to be ordained. He taught for only ten days at one of Woodard's boys' boarding schools in Sussex, Lancing College, but then moved to another, Hurstpierpoint College, where he stayed from 1857 to 1864.[9] While there he was responsible for several subjects, especially languages and science, and he also designed the ironwork of the bookcases in the boys' library, as well as painting the window jambs with scenes from the "Canterbury Tales" and the "Faery Queen".[10]

He took Holy Orders in 1864,[11] and became the curate at Horbury Bridge, West Riding of Yorkshire. It was while acting as a curate that he met Grace Taylor, the daughter of a mill hand, then aged fourteen. In the next few years they fell in love. His vicar, John Sharp, arranged for Grace to live for two years with relatives in York to learn middle-class manners. Baring-Gould, meanwhile, relocated to become perpetual curate at Dalton, near Thirsk. He and Grace were married in 1868 at Wakefield.[12][13] Their marriage lasted until her death 48 years later, and the couple had 15 children, all but one of whom lived to adulthood. When he buried his wife in 1916 he had carved on her tombstone the Latin motto Dimidium Animae Meae ("Half my Soul").

Baring-Gould became the rector of East Mersea in Essex in 1871 and spent ten years there. In 1872 his father died and he inherited the 3,000-acre (12 km2) family estates of Lew Trenchard in Devon, which included the gift of the living of Lew Trenchard parish. When the living became vacant in 1881, he was able to appoint himself to it, becoming parson as well as squire. He did a great deal of work restoring St Peter's Church, Lew Trenchard, and (from 1883 to 1914) thoroughly remodelled his home, Lew Trenchard Manor.

Baring-Gould regarded his principal achievement to be the collection of folk songs that he made with the help of the ordinary people of Devon and Cornwall. His first book of songs, Songs and Ballads of the West (1889–91), was published in four parts between 1889 and 1891. The musical editor for this collection was Henry Fleetwood Sheppard, though some of the songs included were noted by Baring-Gould's other collaborator Frederick Bussell.

Baring-Gould and Sheppard produced a second collection named A Garland of Country Songs during 1895. A new edition of Songs of the West was proposed for publication in 1905. Sheppard had died in 1901, and so the folk song collector Cecil Sharp was invited to undertake the musical editorship for the new edition. Sharp and Baring-Gould also collaborated on English Folk Songs for Schools during 1907. This collection of 53 songs was widely used in British schools for the next 60 years.

Although he had to modify the words of some songs which were too rude for the time, he left his original manuscripts for future students of folk song, thereby preserving many beautiful pieces of music and their lyrics which might otherwise have been lost.

A Fair Copy of the folk songs he collected, together with the notebooks used for gathering information in the field, were given by Baring-Gould to Plymouth Public Library in 1914 and deposited with the Plymouth and West Devon Record Office in 2006. These, together with the folk-song manuscripts from Baring-Gould's personal library discovered at Killerton in 1998, were published as a microfiche edition in 1998. In 2011 the complete collection of folk song manuscripts (including two notebooks not included in the microfiches edition) were digitised and published online by the Devon Tradition Project managed by Wren Music[14] in association with the English Folk Dance and Song Society as part of the "Take Six" project undertaken by the Vaughan Williams Memorial Library. It now forms part of the VWML's "Full English" website. Thirty boxes of additional manuscript material on other topics (the Killerton manuscripts) are kept in the Devon History Centre in Exeter.

Baring-Gould wrote many novels, including The Broom-Squire set in the Devil's Punch Bowl (1896), Mehalah: a story of the salt marshes (1880)[15], Guavas the Tinner (1897),[16] the 16-volume The Lives of the Saints, and the biography of the eccentric poet-vicar of Morwenstow, Robert Stephen Hawker. He also published nearly 200 short stories in assorted magazines and periodicals.[17] Many of these short stories were collected together and republished as anthologies, such as his Book of Ghosts (1904), Dartmoor Idyllys (1896), and In a Quiet Village (1900). His folkloric studies resulted in The Book of Were-Wolves (1865), one of the most frequently cited studies of lycanthropy. He habitually wrote while standing, and his desk can be seen in the manor.

One of his most enduringly popular works was Curious Myths of the Middle Ages,[18] first published in two parts during 1866 and 1868, and republished in many other editions since then. "Each of the book's twenty-four chapters deals with a particular medieval superstition and its variants and antecedents," writes critic Steven J. Mariconda.[19] H. P. Lovecraft termed it "that curious body of medieval lore which the late Mr. Baring-Gould so effectively assembled in book form."[20]

He wrote much about the Westcountry: his works of this topic include:

Baring-Gould served as president of the Royal Institution of Cornwall for ten years from 1897.[21] 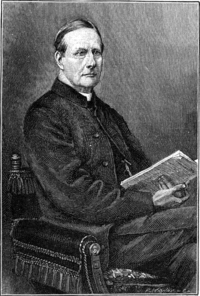 Sabine Baring-Gould, engraving published in Strand Magazine, from a photograph by Downey (died 1881)

Baring-Gould, along with his friend Robert Burnard, organised the first scientific archaeological excavations of hut-circles on Dartmoor at Grimspound during 1893. They then asked R. N. Worth, R. Hansford Worth, the Revd W. A. G. Gray and Dr Prowse to assist them with further investigations. This resulted in the formation of the Committee of the Devonshire Association for the exploration of Dartmoor.[22] Baring-Gould was the secretary and author of the first ten annual reports until 1905. The Dartmoor Exploration Committee performed many archaeological digs of prehistoric settlements on Dartmoor and systematically recorded and in some cases restored prehistoric sites. The current state of many prehistoric stone rows and stone circles on Dartmoor owes much to the work of Sabine Baring-Gould and Robert Burnard and the Dartmoor Exploration Committee. Baring-Gould was president of the Devonshire Association for the year 1896.[23]

He wrote much about Dartmoor: his works of this topic include:

His wife Grace died in April 1916, and he did not remarry; he died on 2 January 1924 at his home at Lew Trenchard and was buried next to his wife.