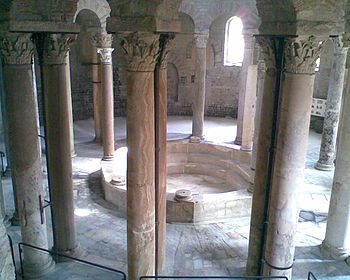 The Sacraments of Initiation are the three rites that introduce a person into the Christian Church, namely, Baptism, Confirmation, and Eucharist. In his apostolic mi Divinae consortium naturae on the sacrament of Confirmation,[1] Pope Paul VI declared: "The sharing in the divine nature given to men through the grace of Christ bears a certain likeness to the origin, development, and nourishing of natural life. The faithful are born anew by Baptism, strengthened by the sacrament of Confirmation, and receive in the Eucharist the food of eternal life."[2]

In Eastern and western Christian liturgical and pastoral tradition to the three sacraments or mysteries of initiation are always celebrated together. In the Latin Church, during infant baptism, only the baptism is conferred to babies while in the western religion it can happen to any one of any age, while the Eucharist and confirmation are postponed until the child achieves age of self-awareness.

Adults are normally baptized after enrollment as a catechumen, either formally, as in the Latin Rite, or more informally, as in some Eastern Catholic Churches. Although not a true member of the Church, catechumens may have some share in Christ, according to the Church.

According to the Catechism, baptism makes one a member of the Body of Christ and prepares one for the reception of the other sacraments. Confirmation is the anointing in the Holy Spirit. The Eucharist gives one the "food of eternal life" (John 6:54), and allows one to receive Jesus.

According to Catholic theology, the way the sacraments of initiation are celebrated is meant to bring a neophyte to experience and know, through visible sacramental signs and gestures, eternal life and grace Jesus has brought into this world. They are always accompanied by the Word of God.[3] Particular focus is placed on the paschal mystery of Christ's death and resurrection. The privileged time of celebrating them is Easter, and by the 4th century it was accepted as the normal time of administering them, although it was also allowed on Pentecost.[4][5]