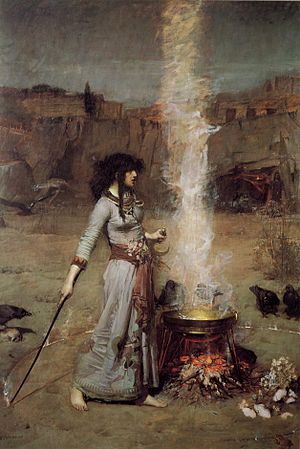 A magic circle is circle (or sphere, field) of space marked out by practitioners of many branches of ritual magic, which they generally believe will contain energy and form a sacred space, or will provide them a form of magical protection, or both. It may be marked physically, drawn in salt or chalk, for example, or merely visualised. Its spiritual significance is similar to that of mandala and yantra[citation needed] in some Eastern religions.

File:Circletriangle.gif
A solomonic magic circle with a triangle of conjuration in the east. This would be drawn on the ground, and the operator would stand within the protection of the circle while a spirit was conjured into the triangle.[citation needed]

Traditionally, circles were believed by ritual magicians to form a protective barrier between themselves and what they summoned.[1] In modern times, practitioners generally cast magic circles to contain and concentrate the energy they raise during a ritual.[citation needed]

Creating a magic circle is known as casting a circle, circle casting, and various other names.[citation needed]

There are many published techniques for casting a circle, and many groups and individuals have their own unique methods. The common feature of these practices is that a boundary is traced around the working area. Some witchcraft traditions say that one must trace around the circle deosil three times. There is variation over which direction one should start in.[citation needed]

Circles may or may not be physically marked out on the ground, and a variety of elaborate patterns for circle markings can be found in grimoires and magical manuals, often involving angelic and divine names. Such markings, or a simple unadorned circle, may be drawn in chalk or salt, or indicated by other means such as with a cord.[1]

The four cardinal directions are often prominently marked, such as with four candles. In ceremonial magic traditions the four directions are commonly related to the four archangels Michael, Gabriel, Raphael and Uriel (or Auriel), or the four classical elements, and also have four associated names of God. Other ceremonial traditions have candles between the quarters, i.e. in the north-east, north-west and so on. Often, an incantation will be recited stating the purpose and nature of the circle, often repeating an assortment of divine and angelic names.

In Wicca, a circle is typically nine feet in diameter, though the size can vary depending on the purpose of the circle, and the preference of the caster.[2]

Some varieties of Wicca use the common ceremonial colour attributions for their "quarter candles": yellow for Air in the east, red for Fire in the south, blue for Water in the west and green for Earth in the north (though these attributions differ according to geographical location and individual philosophy).

The common technique for raising energy within the circle is by means of a cone of power.[1][3]

The barrier is believed to be fragile, so that leaving or passing through the circle would weaken or dispel it.[4] This is referred to as "breaking the circle".[5] It is generally advised that practitioners do not leave the circle unless absolutely necessary.

In order to leave a circle and keep it intact, Wiccans believe a door must be cut in the energy of the circle, normally on the East side. Whatever was used to cast the circle is used to cut the doorway, such as a sword, staff or knife[athame], a doorway is "cut" in the circle, at which point anything may pass through without harming the circle.[6] This opening must be closed afterwards by "reconnecting" the lines of the circle.

The circle is usually closed by the practitioner after they have finished by drawing in the energy with the athame or whatever was used to make the circle including their hand (usually in a widdershins: that is, counter-clockwise fashion). This is called closing the circle or releasing the circle.[6] The term "opening" is often used, representing the idea the circle has been expanded and dissipated rather than closed in on itself.

C. G. Jung comments on a significant dream of Wolfgang Pauli where a snake describes a spellbinding magic circle about the dreamer, establishing a protected temenos.[7]