Sacri Monti of Piedmont and Lombardy

The Sacri Monti (Italian for "Sacred Mountains") of Piedmont and Lombardy are a series of nine groups of chapels and other architectural features created in northern Italy during the seventeenth and late sixteenth century. They are dedicated to various aspects of the Christian faith and are considered of great beauty by virtue of the skill with which they have been integrated into the surrounding natural landscape of hills, forests and lakes. They also house much important artistic material in the form of wall paintings and statuary. In 2003, they were inscribed as a World Heritage Site. 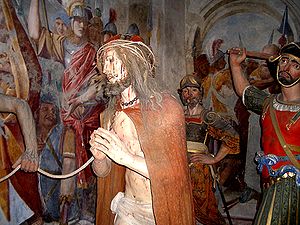 The model of the Sacred Mountain is a Christian creation dating from the late fifteenth century, that during the Counter-Reformation spread from Italy to Europe and the New World. A Sacred Mountain is a devotional complex standing on the slopes of a mountain, with a series of chapels or kiosks containing scenes from the life of Christ, the Virgin Mary or the Saints, in the form of painting or sculptures.

As a re-evocation of the New Jerusalem, Sacred Mountains offered pilgrims an opportunity to visit the Holy Places by conjuring up, on a smaller scale, the buildings in which Christ's Passion took place. The Sacred Mountains stand on high ground, at some distance from the town centre, in a more natural setting. They are usually reached by pilgrimage. The itinerary leading up to the Sacred Mountain often re-evokes the Via Dolorosa, the road leading from Jerusalem to Calvary along which Christ carried the Cross. 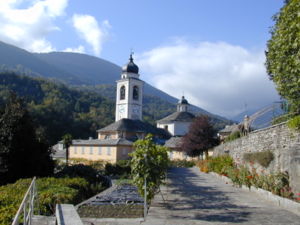 The nine Sacri Monti are: