From Infogalactic: the planetary knowledge core
Jump to: navigation, search
This article is about the type of overland journey. For other uses, see Safari (disambiguation). 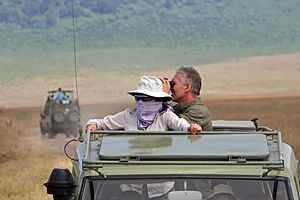 Tourists in safari vehicles in the Ngorongoro crater

A safari /səˈfɑːri/ is an overland journey, usually a trip by tourists to Africa. In the past, the trip was often a big-game hunt, but today, safari often refers to trips to observe and photograph wildlife—or hiking and sight-seeing as well.

Lion-watching during a safari in the Masaai Mara. 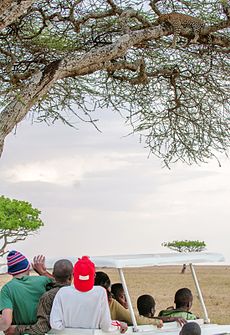 A safari in the Serengeti National Park; Tourists go right under a roadside tree on which a leopard is resting

The Swahili word safari means journey, originally from the Arabic سفر (safar) meaning a journey;[1] the verb for "to travel" in Swahili is kusafiri. These words are used for any type of journey, e.g. by bus from Nairobi to Mombasa or by ferry from Dar es Salaam to Unguja. Safari entered the English language at the end of the 1850s thanks to Richard Francis Burton, the famous explorer.[2]

The Regimental March of the King's African Rifles was 'Funga Safari', literally 'tie up the March', or, in other words, pack up equipment ready to march.

Which is, in English:

On Kenya's independence from Britain, Funga Safari was retained as the Regimental March of the Kenya Rifles, successor to the K.A.R.

In 1836 William Cornwallis Harris led an expedition purely to observe and record wildlife and landscapes by the expedition's members. Harris established the safari style of journey, starting with a not too strenuous rising at first light, an energetic day walking, an afternoon rest then concluding with a formal dinner and telling stories in the evening over drinks and tobacco.[3]

Jules Verne's first novel Five Weeks in a Balloon published in 1863 and H. Rider Haggard's first novel King Solomon's Mines published in 1885, both describe journeys of English travellers on Safari and were best sellers in their day. These two books gave rise to a genre of Safari adventure novels and films.[citation needed]

The safari provided countless hours of cinema entertainment in sound films from Trader Horn (1931) onwards. The safari was used in many adventure films such as the Tarzan, Jungle Jim, and Bomba the Jungle Boy film series up to The Naked Prey (1965) where Cornel Wilde, a white hunter, becomes game himself. The safari genre films were parodied in the Bob Hope comedies Road to Zanzibar and Call Me Bwana. A short 15-minute helicopter safari was shown in Africa Addio where clients are armed, flown from their hotel and landed in front of an unlucky and baffled elephant. Out of Africa has Karen Blixen and famous hunter Denys Finch Hatton travelling, with Denys refusing to abandon home comforts using fine china and crystal and listening to Mozart recordings over the gramophone while on safari trip.

There is a certain theme or style associated with the word, which includes khaki clothing, belted bush jackets, pith helmets or slouch hats, and animal skin patterns. The term safari chic arose after the release of the film Out of Africa.[4] This not only included clothing but also interior design and architecture.[5]