From Infogalactic: the planetary knowledge core
(Redirected from Saguntum)
Jump to: navigation, search 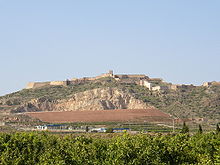 The Castle of Sagunto

Sagunto [Spanish: [saˈɣunto]] (Catalan: Sagunt [Catalan pronunciation: [saˈɣunt]], Valencian: Sagunt [Valencian: [saˈɣunt]], Latin: Saguntum) is a town in Eastern Spain, in the modern fertile comarca of Camp de Morvedre in the province of Valencia. It is located c. 30 km north of Valencia, close to the Costa del Azahar on the Mediterranean Sea.

It is best known for the remains of the ancient Iberian and Roman city of Saguntum, which played a significant part in the Second Punic War between the Carthaginians (under Hannibal) and the Romans.

During the 5th century BC, the Celtiberians built a walled settlement on the hill overseeing the plain; a stretch of cyclopean limestone slabs from the former temple of Diana survives, close to the modern church of Santa Maria, but the settlement site is still older.[clarification needed] The city traded with Greek and Phoenician coastal colonies, and under their influence, minted its own coins. During this period the city was known as Arse (Ripollès i Alegre 2002). By 219 BC Saguntum was a large and commercially prosperous town, which sided with the local Greek colonists and Rome against Carthage, and drew Hannibal's first assault, his siege of Saguntum, which triggered the Second Punic War, one of the most important wars of antiquity.

After stiff resistance over the course of eight months, related by the Roman historian Livy[1] and in more detail by Silius Italicus,[2] Saguntum was captured in 219 BC by the armies of Hannibal.

Seven years later the town was retaken by the Romans. In 214 BC, it became a municipium, was rebuilt and flourished. Hispania was not easily pacified and Romanised, as the Iberian career of Quintus Sertorius makes clear. Saguntum minted coins under his protection, but continued to house a mint in later Roman times. The Romans built a great circus in the lower part of the city and a theatre seating 8000 spectators. Texts found indicate that the city had an amphitheatre and had about 50,000 inhabitants. This prosperity lasted for most of the empire, and is attested by inscriptions and ruins (notably a theatre, demolished by Napoleon's marshal Louis Gabriel Suchet, who also destroyed the Roman tower of Hercules). 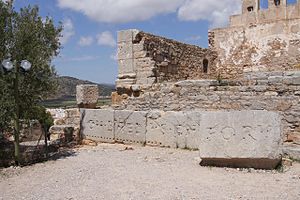 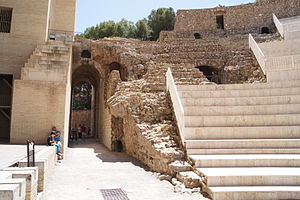 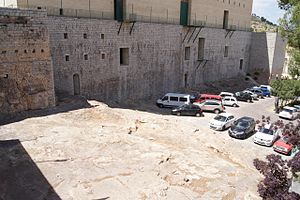 Under the Arian Visigothic kings, Saguntum received its Catholic patron saint, a bishop named Sacerdos, "the priest", who died peacefully of natural causes about AD 560.

In the early 8th century, the Muslim Arabs came and the city became part of the Caliphate of Cordoba and at that time the city reached an era of splendor, with baths, palaces, mosques and schools open for its cosmopolitan population. Then, the town was known as Morvedre (Morviedro in Spanish), a name derived from Latin muri veteres "ancient walls." However, as Valencia grew, Saguntum declined.

In 1098, the city was conquered by El Cid but the Muslims recovered it shortly thereafter. The city had been under the Muslim Arab rule for over five hundred years when James I of Aragon conquered it in 1238.

During the Peninsular War a Spanish attempt to raise the French siege of the castle failed in the Battle of Saguntum on 25 October 1811.

Saguntum was badly damaged in warfare, but has retained many Valencian Gothic structures. In the late 19th century a steel-making industry grew up that supported the modern city, which extends in the coastal plain below the citadel hill. The last steel oven closed in April 1984. It has been restored and is now a tourist attraction.

The famed composer Don Joaquín Rodrigo, who composed Concierto de Aranjuez, among others, was born in Sagunt.