From Infogalactic: the planetary knowledge core
Jump to: navigation, search
In this Japanese name, the family name is Saigō.

Saigō Takamori (Takanaga) (西郷 隆盛 (隆永)?, January 23, 1828 – September 24, 1877) was one of the most influential samurai in Japanese history, living during the late Edo Period and early Meiji Era. He has been dubbed the last true samurai.[1] He was born Saigō Kokichi (西郷 小吉), and received the given name Takamori in adulthood. He wrote poetry under the name Saigō Nanshū (西郷 南洲).[2] His younger brother was Gensui The Marquis Saigō Tsugumichi. 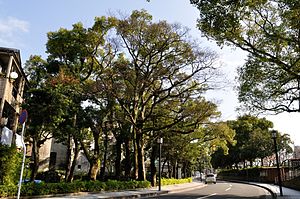 The birthplace at Kajiya-chō, Kagoshima

Saigō Takamori was born in the Satsuma Domain (modern Kagoshima Prefecture) on January 23, 1828, or December 7 in the lunar calendar in the tenth year of the Bunsei era.

Saigō served as a low-ranking samurai official in his early career. The Saigō family official status was Jōkashi (full samurai) but lived as Gōshi (rural samurai), half peasant and half warrior. Though they should have lived with their stipend, given to them by the fief and the Daimyō, in practice, the Saigō lived more like Gōshi and were quite poor, and had debts Saigō Takamori needed 25 years to repay entirely. Because of the usual discrimination by Jōkashi against Gōshi, Saigō Takamori lived every day as a clash between his social and economical status, which he fought with humility, dignity and stoicism. His inner strength greatly impressed the other samurai of Satsuma, then all the Japanese people.

Saigō Takamori was recruited to travel to Edo (modern Tokyo) in 1854 to assist the Daimyo of Satsuma, Shimazu Nariakira, in the Kōbu gattai movement (promoting reconciliation and closer ties between the Tokugawa shogunate and the Imperial court).

Saigō’s activity in Edo came to an abrupt end with the Ansei Purge by Tairō Ii Naosuke against anti-Shogunal activities, and the sudden death of Shimazu Nariakira. Saigō fled back to Kagoshima, where he was arrested and banished to Amami Ōshima island. He was recalled briefly in 1861, only to be banished again, to the more remote island of Okinoerabu, south of Amami Oshima, by the new Satsuma Daimyo Shimazu Hisamitsu. Hisamitsu pardoned Saigō in 1864 and sent him to Kyoto to handle the domain's interests towards the imperial court.

Upon assuming command of the Satsuma soldiers based in Kyoto, Saigō quickly formed an alliance with samurai from Aizu domain against the forces of the rival Chōshū domain, and prevented that domain from seizing control of the Kyoto Imperial Palace in the Kinmon Incident. In August 1864, Saigō was one of the military commanders of the punitive expedition mounted by the Tokugawa bakufu against Chōshū over the incident, but in secret he was conducting negotiations with Chōshū leaders, which later led to the Satcho Alliance. When the Tokugawa bakufu sent a second punitive expedition against Chōshū in June 1866, Satsuma remained neutral.

In November 1867, Shogun Tokugawa Yoshinobu resigned, returning power to the Emperor in what came to be known as the Meiji Restoration. However, Saigō was one of the most vocal and vehement opponents to the negotiated solution, demanding that the Tokugawa be stripped of their lands and special status. His intransigence was one of the major causes of the subsequent Boshin War.

During the Boshin War, Saigō led the imperial forces at the Battle of Toba-Fushimi, and then led the imperial army toward Edo, where he accepted the surrender of Edo Castle from Katsu Kaishū. 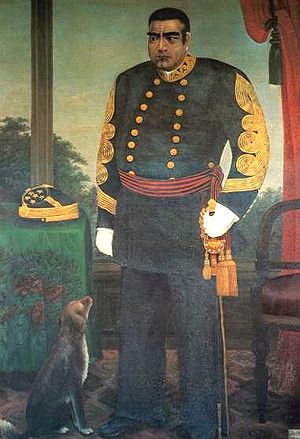 The Seikanron debate. Saigō Takamori is sitting in the center. 1877 painting.

Although Ōkubo Toshimichi and others were more active and influential in establishing the new Meiji government, Saigō retained a key role, and his cooperation was essential in the abolition of the han system and the establishment of a conscript army. In 1871 he was left in charge of the caretaker government during the absence of the Iwakura Mission (1871–72).

Saigō initially disagreed with the modernization of Japan and the opening of commerce with the West. He famously opposed the construction of a railway network, insisting that money should rather be spent on military modernization.[4]

Saigō did insist, however, that Japan should go to war with Korea in the Seikanron debate of 1873 due to Korea's refusal to recognize the legitimacy of the Emperor Meiji as head of state of the Empire of Japan, and insulting treatment meted out to Japanese envoys attempting to establish trade and diplomatic relations. At one point, he offered to visit Korea in person and to provoke a casus belli by behaving in such an insulting manner that the Koreans would be forced to kill him. However, the other Japanese leaders strongly opposed these plans, partly from budgetary considerations, and partly from realization of the weakness of Japan compared with the western countries from what they had witnessed during the Iwakura Mission. Saigō resigned from all of his government positions in protest and returned to his hometown of Kagoshima. 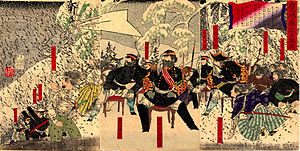 Shortly thereafter, a private military academy was established in Kagoshima for the faithful samurai who had also resigned their posts to follow him from Tokyo. These disaffected samurai came to dominate the Kagoshima government, and fearing a rebellion, the government sent warships to Kagoshima to remove weapons from the Kagoshima arsenal. Ironically, this provoked open conflict, although with the elimination of samurai rice stipends in 1877, tensions were already extremely high. Although greatly dismayed by the revolt, Saigō was reluctantly persuaded to lead the rebels against the central government.

The rebellion was suppressed in a few months by the central government's army, a huge mixed force of 300,000 samurai officers and conscript soldiers under Kawamura Sumiyoshi. The Imperial troops were modern in all aspects of warfare, using howitzers and observation balloons. The Satsuma rebels numbered around 40,000, dwindling to about 400 at the final stand at the Battle of Shiroyama. Although they fought for the preservation of the role of the samurai, they used Western military methods, guns and cannons. All contemporary depictions of Saigō Takamori depict him in Western-style uniforms. At the end of the conflict, running out of material and ammunition, they had to fall back to close-quarter tactics and the use of swords, bows and arrows. 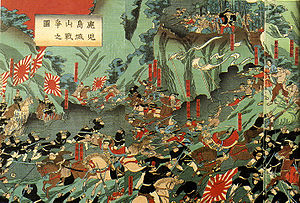 Saigō Takamori (upper right) directing his troops at the Battle of Shiroyama. 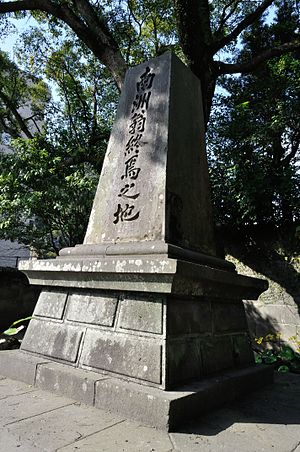 During the battle, Saigō was badly injured in the hip. However, the exact manner of his death is unknown. The accounts of his subordinates claim either that he uprighted himself[clarification needed] and committed seppuku after his injury or that he requested that the comrade Beppu Shinsuke assist his suicide. In debate, some scholars have suggested that neither is the case and that Saigō may have gone into shock following his wound, losing his ability to speak. Several comrades, upon seeing him in this state, would have severed his head, assisting him in the warrior's suicide they knew he would have wished. Later, they would have said that he committed seppuku to preserve his status as a true samurai.[5]

It is not clear what was done with Saigo's head immediately after his death. Some legends say Saigo's manservant hid the head, and it was later found by a government soldier. The head was somehow retrieved by the government forces and was reunited with Saigo's body, which was laid next to that of his deputies Kirino and Murata. This was witnessed by the American sea captain John Capen Hubbard. A myth persists that the head was never found.

Saigo's death brought the Satsuma Rebellion to an end. 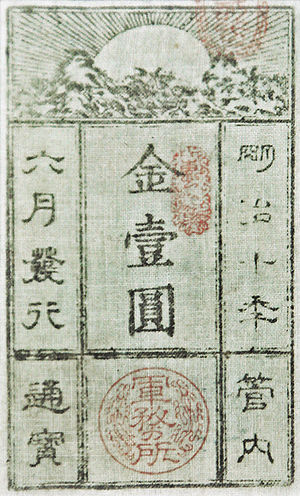 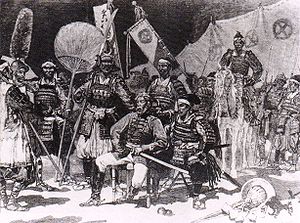 Many legends sprang up concerning Saigō, many of which denied his death. Many people in Japan expected him to return from British Raj India or Qing Dynasty China or to sail back with Tsesarevich Alexander of Russia to overthrow injustice. It was even recorded that his image appeared in a comet near the close of the 19th century, an ill omen to his enemies. Unable to overcome the affection that the people had for this paragon of traditional samurai virtues, the Meiji Era government pardoned him posthumously on February 22, 1889. 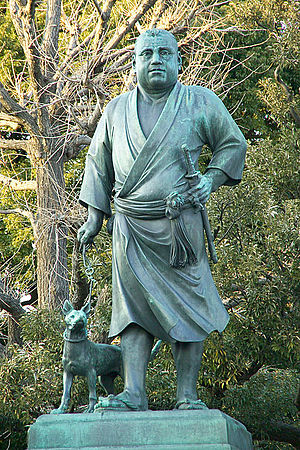 Saigō Takamori's statue near the southern entrance of Ueno Park.

A famous bronze statue of Saigō in hunting attire with his dog stands in Ueno Park, Tokyo. Made by Takamura Kōun, it was unveiled on 18 December 1898. Saigō met the noted British diplomat Ernest Satow in the 1860s, as recorded in the latter's A Diplomat in Japan, and Satow was present at the unveiling as recorded in his diary.

A reproduction of the same statue stands on Okinoerabujima, where Saigō had been exiled.[6]

A Japanese hand fan commemorating the event, which survives in the collection of the Staten Island Historical Society in New York, features a depiction of Saigo Takamori in a scene labeled (in English) ”THE BATTLE NEAR THE CITADEL OF KUMAMOTO.”[7]

Saigō's last stand against the Meiji government in the Battle of Shiroyama was the historical basis for the 2003 film The Last Samurai. Katsumoto, played by Ken Watanabe in the movie, is based on Saigō.

An animated version of Saigō appears during the final scene of the 1985 anime film Kamui no Ken. Saigō is a supporting character in the 2008 NHK Taiga drama Atsuhime, played by Ozawa Yukiyoshi.

Saigō appears as a general in the game Shogun 2: Fall of the Samurai during Japan's Meiji Restoration