Saint-Brieuc (pronounced French: [sɛ̃.bʁi.jø], Breton: Sant-Brieg, Gallo: Saent-Berioec) is a commune in the Côtes-d'Armor department in Brittany in northwestern France.

The historic bishoprics of Brittany

Saint-Brieuc is named after a Welsh monk Brioc, who Christianised the region in the 6th century and established an oratory there. Bro Sant-Brieg/Pays de Saint-Brieuc, one of the nine traditional bishoprics of Brittany which were used as administrative areas before the French Revolution, was named after Saint-Brieuc. It also dates from the Middle Ages when the "pays de Saint Brieuc," or Penteur, was established by Duke Arthur II of Brittany as one of his eight "battles" or administrative regions.

The town is located by the English Channel, on the Bay of Saint-Brieuc. Two rivers flow through Saint-Brieuc: the Goued/Gouët and the Gouedig/Gouédic.

Other towns of notable size in the département of Côtes d'Armor are Gwengamp/Guingamp, Dinan, and Lannuon/Lannion all sous-préfectures.

In 2009, large amounts of sea lettuce, a type of algae, washed up on many beaches of Brittany, and when it rotted it emitted dangerous levels of hydrogen sulphide.[1] A horse and some dogs died and a council worker driving a truckload of it fell unconscious at the wheel and died.[1] The beach at Saint-Brieuc suffered bad damage and had to be shut.[citation needed]

Saint-Brieuc is one of the towns in Europe that host the IU Honors Program.

The Cemetery of Saint Michel contains graves of several notable Bretons, and sculptures by Paul le Goff and Jean Boucher. Outside the wall is Armel Beaufils's statue of Anatole Le Braz. Le Goff, who was killed with his two brothers in World War I, is also commemorated in a street and with his major sculptural work La forme se dégageant de la matière in the central gardens, which also includes a memorial to him by Jules-Charles Le Bozec and work by Francis Renaud.

Inhabitants of Saint-Brieuc are called briochins in French. 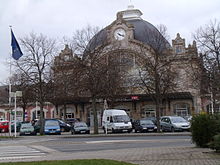 The Saint-Brieuc railway station, situated on the Paris–Brest railway, is connected by TGV Atlantique to Paris Montparnasse station in about 3 hours.

There are no scheduled air services from Saint-Brieuc – Armor Airport.

Saint-Brieuc is hometown of many personalities:

Saint-Brieuc préfecture of the Côtes-d'Armor is twinned with :