From Infogalactic: the planetary knowledge core
Jump to: navigation, search
For treaties with this name, see Treaty of Saint-Germain-en-Laye (disambiguation).

Saint-Germain-en-Laye (French pronunciation: ​[sɛ̃ ʒɛʁmɛ̃ ɑ̃ lɛ]) is a commune in the Yvelines department in the Île-de-France in north-central France. It is located in the western suburbs of Paris, 19.1 km (11.9 mi) from the centre of Paris.

Inhabitants are called Saint-Germanois or Saint-Germinois. With its elegant tree-lined streets it is one of the more affluent suburbs of Paris, combining both high-end leisure spots and exclusive residential neighborhoods (see the Golden Triangle of the Yvelines).

Saint-Germain-en-Laye was founded in 1020 when King Robert the Pious (ruled 996-1031) founded a convent on the site of the present Church of Saint-Germain.

In 1688, James II, King of England, exiled himself to the city due to religious conflicts in his own country. He spent the remainder of his days there, and died on 16 September 1701.[1]

Prior to the French Revolution in 1789, it had been a royal town and the Château de Saint-Germain the residence of numerous French monarchs. 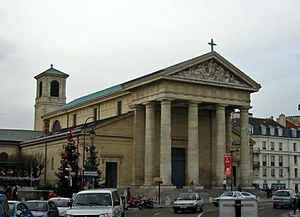 The Church of Saint-Germain.

The old château was constructed in 1348 by King Charles V on the foundations of an old castle (château-fort) dating from 1238 in the time of Saint Louis. Francis I was responsible for its subsequent restoration. In 1862, Napoleon III set up the Musée des Antiquités Nationales in the erstwhile royal château. This museum has exhibits ranging from Paleolithic to Celtic times. The "Dame de Brassempouy" sculpted on a mammoth's ivory tusk around 23,000 years ago is the most famous exhibit in the museum.

Kings Henry IV and Louis XIII left their mark on the town.

Louis XIV was born in the château (the city's coat of arms consequently shows a cradle and the date of his birth), and established Saint-Germain-en-Laye as his principal residence from 1661 to 1681. Louis XIV turned over the château to James VII & II of Scotland and England after his exile from Britain after the Glorious Revolution in 1688. James lived in the Château for 13 years, and his daughter Louisa Maria Stuart was born in exile here in 1692. James II is buried in the Church of Saint-Germain.

Saint-Germain-en-Laye is famous for its 2.4-kilometre (1.5 mi) long stone terrace built by André Le Nôtre from 1669 to 1673. The terrace provides a view over the valley of the Seine and, in the distance, Paris.

The Treaty of Saint-Germain was signed in 1919 and was applied on July 16, 1920. The treaty officially registered the breakup of the Habsburg empire, which recognized the independence of Czechoslovakia, Poland, Hungary, and the Kingdom of the Serbs, Croats, and Slovenes (Yugoslavia).[2]

One of the German bunkers built in 1942

During the French Revolution, the name was changed along with many other places whose names held connotations of religion or royalty. Saint-Germain-en-Laye became Montagne-du-Bon-Air.

In the 19th century, Napoleon I established his cavalry officers training school in the Château-Vieux.

During the occupation from 1940 to 1944, the town was the headquarters of the German Army[clarification needed].

Saint-Germain-en-Laye is also served by Achères – Grand Cormier station on Paris RER line A and on the Transilien Paris – Saint-Lazare suburban rail line. This station is located in the middle of the Forest of Saint-Germain-en-Laye, far away from the urbanized part of the commune.

Saint-Germain-en-Laye has a proud footballing history. From 1904 to 1970 it was represented by Stade Saint-Germain which, following a 1970 merger with Paris FC, became Paris Saint-Germain, or Paris SG for short. They are a first division football team who have won several French football cups and one C2 cup.[3] They are currently the 2nd highest ranking team in France.[4] From 1904 to 1974, "Le Camp des Loges" was the main stadium where the team trained. They are now, however, based in Paris - but continue regularly to train in their original stadium. In 2011, Paris Saint-Germain was bought by the Qatar Investment Authority, bringing greater financial means.[5]

Capcom Entertainment France, a Capcom subsidiary, has its head office in Saint-Germaine-en-Laye.[7] 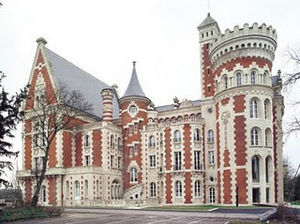 The Lycée International de Saint Germain-en-Laye, a public school, is in Saint-Germain-en-Laye. It includes a section for Japanese students, and the Japanese Ministry of Education, Culture, Sports, Science and Technology (MEXT) lists that program in its group of European hoshuko (part-time Japanese educational programmes).[8]

Saint-Germain-en-Laye was the birthplace of:

The town is also associated with:

Saint-Germain-en-Laye is twinned with: