Saint-Omer is a commune in France.

It is a commune and sub-prefecture of the Pas-de-Calais department 68 km (42 mi) west-northwest of Lille on the railway to Calais. The town is named after Saint Audomar, who brought Christianity to the area.

The canalised portion of the river Aa begins at Saint-Omer, reaching the North Sea at Gravelines in northern France. Below its walls, the Aa connects with the Neufossé Canal, which ends at the Lys River.

Omer, bishop of Thérouanne, in the 7th century established the Abbey of Saint Bertin, from which that of Notre-Dame was an offshoot. Rivalry and dissension, which lasted till the French Revolution, soon sprang up between the two monasteries, becoming especially virulent when in 1559 St Omer became a bishopric and Notre-Dame was raised to the rank of cathedral.

In the 9th century, the village that grew up round the monasteries took the name of St Omer. The Normans laid the place waste about 860 and 880. Ten years later the town and monastery had built fortified walls and were safe from their attack.

Situated on the borders of territories frequently disputed by French, Flemish, English and Spaniards, St Omer long continued subject to siege and military invasions. In 1071 Philip I and Count Arnulf III of Flanders were defeated at St Omer by Robert the Frisian.

Godfrey de Saint-Omer, a Flemish knight and one of the founding members of the Knights Templar in 1119, is said to have come from the family of the Lords of Saint-Omer.

In 1127 the town received a communal charter from William Clito, count of Flanders. In 1340 a large battle was fought in the town's suburbs between an Anglo-Flemish army and a French one under Eudes IV, Duke of Burgundy, in which the Flemish force was forced to withdraw. In 1493 the town became part of the Low Countries and under Spanish dominion for more than 170 years. King Henry VIII of England employed a swordsman from Saint-Omer for the execution of Queen Anne Boleyn, rather than having a queen consort beheaded with the common axe.

The French made futile attempts against the town between 1551-96. During the Thirty Years' War, the French attacked in 1638 (under Cardinal Richelieu) and 1647. Finally in 1677, after seventeen days' siege, Louis XIV forced the town to capitulate; and the peace of Nijmegen permanently confirmed the conquest and its annexation by France. In 1711 St Omer, on the verge of surrendering because of famine, was saved by the daring of Jacqueline Robin, who risked her life to bring provisions into the town.

The College of Saint Omer was established in 1593 by Fr Robert Persons SJ, an English Jesuit, to educate English Catholics. After the Protestant Reformation, England had established penal laws against Catholic education in the country. The college operated in St Omer until 1762, when it migrated to Bruges and then to Liège in 1773. It finally moved to England in 1794, settling at Stonyhurst, Lancashire. Former students of the College of Saint Omer include John Carroll, his brother Daniel and his cousin Charles.

During World War I on 8 October 1914, the British Royal Flying Corps (RFC) arrived in Saint-Omer and a headquarters was established at the aerodrome next to the local race course. For the following four years, Saint-Omer was a focal point for all RFC operations in the field. Although most squadrons only used Saint-Omer as a transit camp before moving on to other locations, the base grew in importance as it increased its logistic support to the RFC. Many Royal Air Force squadrons can trace their roots to formation at Saint-Omer during this period. Among which are No. IX Squadron RAF which was formed at Saint-Omer, 14 December 1914 and No. 16 Squadron RAF which was formed on 10 February 1915.

During World War II, the Luftwaffe used the airfield. When the RAF's legless Battle of Britain ace, Douglas Bader, parachuted from his Spitfire during an aerial battle over France, he was initially treated at a Luftwaffe hospital at Saint Omer. He had lost an artificial leg when bailing out, and the RAF dropped him another one during a bombing raid.

The fortifications (which had been improved by Vauban in the 17th century) were demolished during the last decade of the 19th century, and boulevards and new thoroughfares built in their place. A section of the ramparts remains intact on the western side of the town, converted into a park known as the jardin public (public garden). There are two harbours outside the city and another within its limits. Saint-Omer has wide streets and spacious squares. 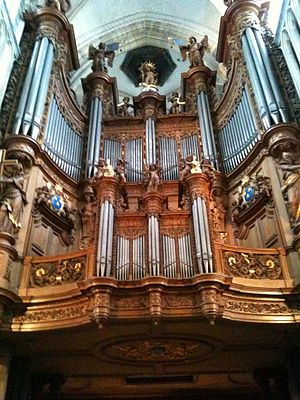 The old cathedral was constructed almost entirely in the 13th, 14th and centuries. A heavy square tower finished in 1499 surmounts the west portal. The church contains Biblical paintings, a colossal statue of Christ seated between the Virgin Mary and St John (13th century, originally belonging to the cathedral of Thérouanne and presented by the emperor Charles V), the cenotaph of Saint Audomare (Omer) (13th century) and numerous ex-votos. The richly decorated chapel in the transept contains a wooden figure of the Virgin (12th century), the object of pilgrimages. Of St Bertin church, part of the abbey (built between 1326 and 1520 on the site of previous churches) where Childeric III retired to end his days, there remain some arches and a lofty tower, which serve to adorn a public garden. Several other churches or convent chapels are of interest, among them St Sepulchre (14th century), which has a beautiful stone spire and stained-glass windows. The cathedral has a huge Cavaillé-Coll organ, which is still playable. 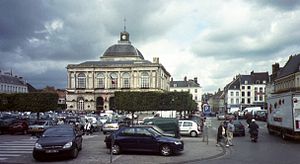 A collection of records, a picture gallery, and a theatre are all situated in the town hall, built of the materials from the abbey of St Bertin. Several houses date from the 16th and 17th centuries. The Hôtel Colbert, once the royal lodging, is now occupied by an archaeological museum. The military hospital occupies the former English College, founded by the English Jesuits in 1593. It is now part of the Lycée Alexandre Ribot. Besides the Lycée, there are schools of music and of art.

The old episcopal palace adjoining the cathedral is used as a court-house. Saint-Omer is the seat of a court of assizes and tribunals, of a chamber of commerce, and of a board of trade arbitration.

The chief statue in the town is that of Jacqueline Robin, who in 1711 helped the town resist a siege by Marlborough and Prince Eugene of Savoy.

The industries include the manufacture of linen goods, sugar, soap, tobacco pipes, and mustard, the distilling of oil and liqueurs, dyeing, salt-refining, malting and brewing and fresh frogs and snails for sale at the market.

At the end of the marsh, on the borders of the forest of Clairmarais, are the ruins of the abbey founded in 1140 by Thierry of Alsace. Thomas Becket sought refuge here in 1165. To the south of Saint-Omer, on a hill commanding the Aa, lies the camp of Helfaut, often called the camp of Saint-Omer.

On the Canal de Neufossé, near the town, is the Ascenseur des Fontinettes, a hydraulic lift which once raised and lowered canal boats to and from the Aa, over a height of 12m. This was replaced in 1967 by a large lock.

During the Second World War, the area was chosen as a launch site for the V-2 rocket. The nearby blockhouse at Éperlecques and underground complex of La Coupole were built for this purpose and are open to the public.

Saint-Omer is diverse in terms of ethnic, linguistic and immigrant communities. Haut-Pont is a heavily West Flemish section of Saint-Omer which has Flemish/Belgian roots. In the Southeast of the cathedral is a newly formed Turkish neighborhood, the majority of the local Turks are members of the Christian faith (i.e. Greek Orthodox or of ethnic Greek origin, Eastern Rite and Catholic converts) other than practising Islam, who arrived in France after World War I to escape religious persecution. Genealogists have studied how thousands of locals have British, Dutch, German, Austrian, Hungarian, Czech, Slovak and Polish relatives, as a result of the region's mining and glass manufacturing industries (the now closed Luminix factory), this has contributed to a revived post-war population.

The public library of Saint-Omer holds, in its rare books section,[1] one of the three French copies of the 42-line Gutenberg Bible, originally from the library of the Abbey of Saint Bertin. The other two copies are in Paris. In November 2014, a previously unknown Shakespeare First Folio was found in a public library in Saint-Omer.[2] The book had lain undisturbed in the library for 200 years. The first 30 pages were missing. A number of experts assisted in authenticating the folio, which also had a name, "Neville", written on the first surviving page, indicating that it may have once been owned by Edward Scarisbrick. Scarisbrick had fled England due to anti-Catholic repression and attended Saint-Omer College, a Jesuit institution.[3] Confirmation of its authenticity came from a professor at the University of Nevada and one of the world's foremost authorities on Shakespeare, Eric Rasmussen, who happened to be overseas at the time.[4] The only other known copy of a First Folio in France is in the National Library in Paris.[5]

Saint Omer is twinned with: