From Infogalactic: the planetary knowledge core
Jump to: navigation, search
For other places with the same name, see Saint-Quentin (disambiguation).

Saint-Quentin (French pronunciation: ​[sɛ̃.kɑ̃.tɛ̃]) is a commune in the Aisne department in Picardy in northern France. It has been identified as the Augusta Veromanduorum of antiquity. It is named after Saint Quentin, who is said to have been martyred here in the 3rd century.

The mayor of Saint-Quentin is Xavier Bertrand, a member of the right-wing UMP Party.

The city was founded by the Romans, in the Augustean period, to replace the oppidum of Vermand (11 km away) as the capital of Viromandui (Celtic Belgian people who occupied the region). It received the name of Augusta Viromanduorum, Augusta of the Viromandui, in honor of the Emperor Augustus. The site is that of a ford across the River Somme. During the late Roman period, it is possible that the civitas capital was transferred back to Vermand (whose name comes from Veromandis); almost nothing relating to the 4th century has been found in Saint-Quentin.

During the early Middle Ages, a major monastery developed, based on pilgrimage to the tomb of Quentin, a Roman Christian who came to evangelize the region and was martyred in Augusta, giving rise to a new town which was named after him.

From the 9th century, Saint-Quentin was the capital of Vermandois County. From the 10th century, the counts of Vermandois (descendants of the Carolingian, then Capetian families) were very powerful. The city grew rapidly: the "bourgeois" organized themselves and obtained, in the second half of the 11th century (a very early date), a municipal charter which guaranteed their commune a large degree of autonomy.

At the beginning of the 13th century, Saint-Quentin entered the royal domain. At that time, it was a thriving city, based on its wool textile industry (city “drapante”). It was also a centre of commerce boosted by its position on the border of the kingdom of France, between the Champagne fairs and the cities of Flanders (wine exportation, etc.): it had an important annual fair. It also benefited from its location in the heart of a rich agricultural region (trade of grain and “guède”, woad, a high-value blue colouring pigment).

From the 14th century, Saint-Quentin suffered from this strategic position: it endured the French-English wars (Hundred Years' War). In the 15th century, the city was disputed between the king of France and the dukes of Burgundy (it is one of the "cities of the Somme"). Ravaged by the plague on several occasions, its population decreased, while its economy was in crisis: its fair was increasingly irrelevant, and agricultural production diminished. The declining textile industry turned to the production of flax canvas. Meanwhile, the city faced major expenses to maintain its fortifications and armed troops.

Between the end of the 15th century and the mid-17th century, this strategic position was the cause of frequent misfortune. In 1557, a siege by the Spanish army ended with the looting of the city and its desertion for two years. Given back to France in 1559, it underwent intense fortification work: the medieval wall was protected by many new advanced fortifications, redesigned several times. Two districts were razed to make way for them. In the mid-17th century, the city escaped the sieges, but suffered the horrors of wars ravaging the Picardy region, accompanied by the plague (in 1636, three thousand people died, out of perhaps ten thousand inhabitants) and famine.

In the second half of the 17th century, the conquests of Louis XIV took St Quentin away from the border, and it lost much of its strategic role. At the end of the 16th century, its textile production specialized in fine flax canvas (“batiste” and lawn). This brought prosperity, particularly in the 18th century, when these textiles were exported across Europe and the Americas. 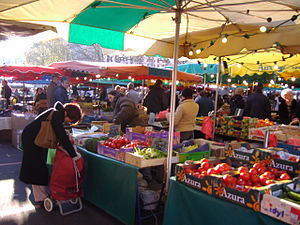 During the First French Empire, difficulties in the export market brought an economic decline. At the request of the municipality, Napoleon authorized the razing of the fortifications, to allow the city to grow beyond its old boundaries. In 1814-1815, Saint-Quentin was occupied by the Russian army, but without any damage.

In the 19th century, St Quentin developed into a thriving industrial city, thanks to entrepreneurs constantly on the lookout for new technologies. Textiles and mechanical products were foremost among a wide variety of products.

In 1870, during the Franco-Prussian War, the population repelled the invader on October 8, but the city fell during the second offensive. That hopeless but heroic action had national repercussions: Saint-Quentin was decorated with the Legion of Honour. In 1871, on January 19, the French army was defeated near the town. 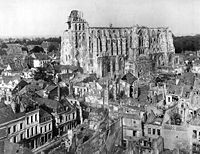 The First World War hit St Quentin very hard. In September 1914, the city was overrun, and it endured a harsh occupation. From 1916, it lay at the heart of the war zone, because the Germans had integrated it into the Hindenburg Line. After the evacuation of the population in March, the town was systematically looted and industrial equipment removed or destroyed. The fighting destroyed it: 80% of buildings (including the Basilica of Saint-Quentin) were damaged.

Despite national support, the reconstruction process was long, and the city struggled to regain its pre-1914 dynamism. The 1911 population of 55,000 was achieved again only in the mid-1950s, in the context of general economic expansion. This prosperity continued until the mid-1970s, when the French textile industry began to suffer through competition from developing countries.

La basilique hôtel de ville XIX° : l'hôtel de ville of Saint-Quentin, was built in 1509, in a gothic style, 173 sculptures. L'hôtel de ville of Saint-Quentin is famous for its peal of 37 bells. Ce monument abrite une superbe salle des mariages (plafond polychrome et cheminée de type renaissance). The city council hall was done in 1925 (Art déco). The municipal teater Jean-Vilar, built in 1844. Beguine convents : the city has many beguine convents from the Middle-Age. The Fervaques palace: was built between 1897 and 1911,it is the place of High court. The Canonniers'door

The Gare de Saint-Quentin is the railway station, offering connections to Paris, Reims, Amiens, Lille and several regional destinations. The A26 motorway connects Saint-Quentin with Reims and Calais, the A29 with Amiens.

Saint-Quentin is twinned with: