Saint-Valery-sur-Somme is a commune in the Somme department. The village is a popular tourist destination because of its medieval character and ramparts, Gothic church and long waterside boardwalk.

The commune is on the Picardie coast adjacent to the Baie de la Somme and at the mouth of the Somme river. It is 30 kilometres (19 miles) north west of Abbeville and to the west of the battlefields of the Somme. Most of the commune lies adjacent to the sea and the Somme river on the Quai du Romerel, Quai Courbet, Quai Jeanne d'Arc, Quai Blavet and the Quai Perree. The oldest part of the commune lies on the northern coast to the north west of the main settlement. To the south is the main road, the CD940 between Abbeville and Cayeux-sur-Mer.

The history of the commune dates back to before the era of the Roman invasion when it was a small settlement inhabited by Gauls. The Roman invasion encouraged the small hamlet to grow into a small village and after the Romans left France the village soon came under the power of the Franks.

In 611, the monk Gualaric (Walric), also known as Valery, arrived in the area. He installed himself as a hermit on the headland of the site of Leuconaus, now the Cap Hornu.. His virtue and miracles quickly attracted disciples. These disciples formed a primitive abbey. The saint was then buried there in 622 and the Chapelle des marins was erected in 628 by Saint Blimont over his burial place. Clotaire II (King of Neustrie) provided the foundations of the new abbey in 627. The relics of the saint attracted many pilgrims to the abbey which had become known as Saint-Valery. During the 8th and 9th century, the abbey and village were plundered and devastated on several occasions by the Vikings.

The village grew during the 10th and 11th centuries and was historically significant as the site where William the Conqueror assembled his fleet before sailing over to England in 1066. During the many wars between the French and the English the village passed between French, English and Burgundian ownership. The English destroyed the abbey and cloister in order to strengthen the nearby St Valery castle. In 1431, Joan of Arc, captive of the English, was held prisoner in the local prison where she was then conveyed to Rouen and burnt at the stake. The cell in which she stayed can still be found near part of the old village walls.

The commune found peace and prosperity during the 15th, 16th and 17th centuries. The abbey was rebuilt and still stands today. The activity of the port flourished, thanks to the export of the wines and the growth of the herring industry. It was near enough to Paris to be one of the earlier suppliers of the chasse marée merchants. The commune mirrors the history of France, becoming a site of religious conflict between Protestants and Catholics and later as a source of conflict during the French revolution.

The commune was popular during the 19th century with artists and writers and Victor Hugo, Jules Verne, Sisley and Degas all had villas here at one time or another. 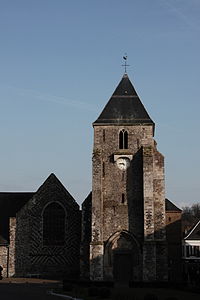 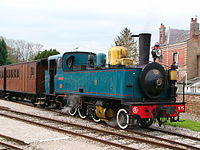 Saint-Valery has a station (and out-of-season terminus) of the narrow gauge "Chemin de Fer de la Baie de Somme" (Somme Bay Railway), which is now largely a tourist attraction. Running around the entire length of the bay, this railway connects Le Crotoy with Noyelles-sur-Mer, and Saint-Valery; in the summer season trains also run from Saint-Valery to Cayeux-sur-Mer and the sands at Brighton Plage.