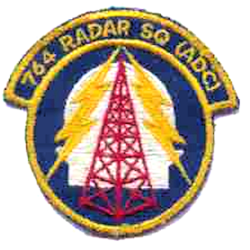 Emblem of the 764th Radar Squadron

Saint Albans Air Force Station (AFS) was selected as one of the first of twenty-four Air Defense Command stations of the permanent United States surveillance radar network. On December 2, 1948, the Air Force directed the Army Corps of Engineers to proceed with construction of this and the other twenty-three sites.

The station was activated on 27 November 1950 at Bellevue Hill, VT. On 1 September 1951, the 764th Aircraft Control and Warning Squadron began operating a pair of AN/CPS-6B radars at and assumed coverage provided by the temporary L-3 "Lashup" site at Fort Ethan Allen, which had activated in February 1950. One of these radars remained in service until 1962. The other was retired from service in 1958 with the arrival of an AN/FPS-6, and initially the station functioned as a Ground-Control Intercept (GCI) and warning station. As a GCI station, the squadron's role was to guide interceptor aircraft toward unidentified intruders picked up on the unit's radar scopes. On 1 December 1953, the station was renamed Saint Albans AFS.

A second AN/FPS-6 unit arrived during 1959. During 1959 Saint Albans AFS joined the Semi Automatic Ground Environment (SAGE) system, initially feeding data to DC-05 at Topsham AFS, Maine. After joining, the squadron was redesignated as the 764th Radar Squadron (SAGE) on 1 October 1959. The radar squadron provided information 24/7 the SAGE Direction Center where it was analyzed to determine range, direction altitude speed and whether or not aircraft were friendly or hostile. In August 1962 the station was switched to the SAGE Data Center DC-02 at Stewart AFB, New York. Beginning in 1962, this site operated with an AN/FPS-7C search radar. An AN/FPS-26A arrived in 1963 to replace one of the AN/FPS-6 height-finder radars. On 31 July 1963, the site was redesignated as NORAD ID Z-14. The other AN/FPS-6 was retired in 1968. The AN/FPS-7C was later upgraded to an AN/FPS-107.

Over the years, the equipment at the station was upgraded or modified to improve the efficiency and accuracy of the information gathered by the radars. The facility came under Tactical Air Command jurisdiction in 1979 with the inactivation of Aerospace Defense Command and the activation of ADTAC. The 764th Radar Squadron was inactivated on 29 June 1979 as part of the general closure of aircraft radar surveillance stations, the station was closed on 29 June.

With the closure by the USAF, the FAA assumed control of the site, and continue to operate an AN/FPS-67B search radar there today (in the former AN/FPS-107 radar tower). The site is now data-tied into the Joint Surveillance System (JSS). The Blue Mountain Gap Filler site today is obliterated; the Bangor site support building remains intact.