From Infogalactic: the planetary knowledge core
Jump to: navigation, search
This article is about the mother of the Virgin Mary. For other uses, see Saint Anne (disambiguation).

Saint Anne (also known as Ann or Anna or Anne, from Hebrew Channah חַנָּה, meaning "favor" or "grace") of David's house and line, was the mother of the Virgin Mary and grandmother of Jesus Christ, according to Christian and Islamic tradition. Mary's mother is not named in the canonical gospels, nor in the Qur'an. Anne's name and that of her husband Joachim come only from New Testament apocrypha, of which the Protoevangelium of James (written perhaps around 150) seems to be the earliest that mentions them.

The story bears a similarity to that of the birth of Samuel, whose mother Hannah had also been childless. Although Anne receives little attention in the Western church prior to the late 12th century,[1] dedications to Anne in the Eastern church occur as early as the 6th century.[2] In the Eastern Orthodox Churches and Eastern Catholic Churches, she is revered as Hannah. In the Eastern Orthodox tradition, Hannah is ascribed the title Forbear of God, and both the Birth of Mary and the Dedication of Mary to the Temple are celebrated as two of the Twelve Great Feasts. The Dormition of Hannah is also a minor feast in the Eastern Church. In Protestant tradition it is held that Martin Luther chose to enter religious life as a Roman Catholic Augustinian monk after crying out to St. Anne.[3] [4]

Anne (Arabic: Hannah) is also revered in Islam, recognised as a highly spiritual woman and as the mother of Mary. The Qur'an describes her as the daughter of Faqud, who remained childless until her old age. One day she saw a bird feeding its young while sitting in the shade of a tree, which awakened her desire to have children of her own. Hannah prayed for a child and eventually conceived; her husband, named Imran, died before the child was born. Expecting the child to be male, Hannah vowed to dedicate him to isolation and service in the Temple.[N 1][5][6]

However, Hannah bore a daughter instead, and named her Mary. Her words [N 2] upon delivering Mary reflect her status as a great mystic, realising that while she had wanted a son, this daughter was God's gift to her.[5][6][clarification needed] 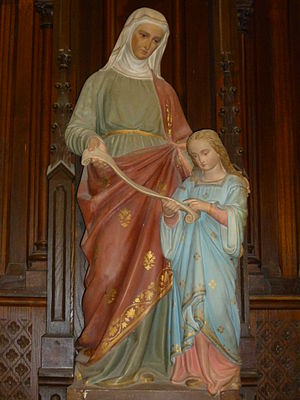 Saint Anne with Mary as a child.

Although the canonical books of the New Testament never mention the parents of the Virgin Mary, traditions about her family, childhood, education, and eventual betrothal to Joseph developed very early in the history of the church. The oldest and most influential source for these is the apocryphal Protevangelium of James, first written in Greek around the middle of the second century. In the West, the Protevangelium fell under a cloud in the fourth and fifth centuries when it was accused of "absurdities" by St. Jerome and condemned as untrustworthy by Popes Damasus I, Innocent I, and Gelasius I.[7]

Ancient belief, attested to by a sermon of St John Damascene, was that Anne married once. In late medieval times, legend held that Anne was married three times first to Joachim, then to Clopas and finally to a man named Solomas and that each marriage produced one daughter: Mary, mother of Jesus, Mary of Clopas, and Mary Salomæ, respectively.[8] The sister of St Anne was Sobe, who was the mother of Saint Elizabeth.

Similarly, in the 4th century and then much later in the 15th century, a belief arose that Mary was born of Anne by virgin birth preserving Anne's body and soul intact as distinct from the doctrine of the Immaculate Conception that preserved her daughter's body and soul intact and sinless from the first moment of existence.[9] Adherents included the 16th century Lutheran mystic Valentine Weigel who claimed Anne conceived Mary by the power of the Holy Spirit rather than conventional conjugal relations. This belief was condemned as an error by the Catholic Church in 1677. In the fifteenth century, the Catholic cleric Johann Eck related in a sermon that St Anne's parents were named Stollanus and Emerentia. The Catholic Encyclopedia (1907) regards this genealogy as spurious.[9]

In the Eastern church, the cult of Anne herself may go back as far as c. 550, when Justinian built a church in Constantinople in her honor. The earliest sign of her veneration in the West is an 8th-century fresco in the church of Santa Maria Antiqua, Rome.[7] A shrine at Douai, in northern France, was one of the early centers of devotion to St. Anne.[10]

In the Maltese language, the Milky Way galaxy is called It-Triq ta' Sant'Anna, literally "The Way of St. Anne".[12]

The supposed relics of St. Anne were brought from the Holy Land to Constantinople in 710 and were kept there in the church of St. Sophia as late as 1333.[9] During the twelfth and thirteenth centuries, returning crusaders and pilgrims from the East brought relics of Anne to a number of churches, including most famously those at Apt, in Provence, Ghent, and Chartres.[7] St. Anne's relics have been traditionally preserved and venerated in the many cathedrals and monasteries dedicated to her name, for example in Austria, Canada,[13] Germany, Italy,[14] and Greece in Holy Mount and the city of Katerini.[15] Medieval and baroque craftsmenship is evidenced in the striking metalwork of the life-size reliquaries containing the bones of her forearm for example. Examples employing folk art techniques are also known.

Düren has been the main place of pilgrimage for Anne since 1506, when Pope Julius II decreed that her relics should be kept there. 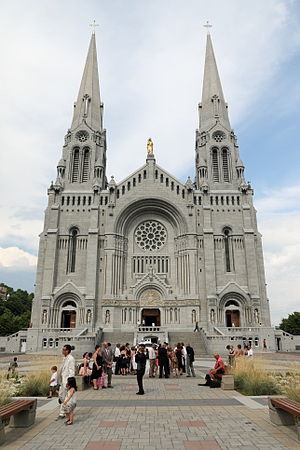 St. Anne is patroness of unmarried women, housewives, women in labor, grandmothers, horseback riders, cabinet-makers,[10] and the Mi'kmaq people of Canada. As the Mother of the Blessed Virgin Mary, the devotion to St Anne as the patron of miners arises from the medieval comparison between the Virgin Mary and Christ and precious metals - silver and gold. Anne's womb was considered the source from which these precious metals were mined.[16] St Anne is also said to be a patron saint of sailors and a protector from storms.[11]

The subject of Joachim and Anne The Meeting at the Golden Gate was a regular component of artistic cycles of the Life of the Virgin. The couple meet at the Golden Gate of Jerusalem and embrace. They are aware of Anne's pregnancy, of which they have been separately informed by an archangel. This moment stood for the conception of Mary, and the feast was celebrated on the same day as the Immaculate Conception. Art works representing the Golden Gate and the events leading up to it were influenced by the narrative in the widely read Golden Legend of Jacobus de Voragine. The Birth of Mary, the Presentation of Mary and the Marriage of the Virgin were usual components of cycles of the Life of the Virgin in which Anne is normally shown.

Anne is never shown as present at the Nativity of Christ, but is frequently shown with the infant Christ in various subjects. She is sometimes believed to be depicted in scenes of the Presentation of Jesus at the Temple and the Circumcision of Christ, but in the former case, this likely reflects a misidentification through confusion with Anna the Prophetess. There was a tradition that Anne went (separately) to Egypt and rejoined the Holy Family after their Flight to Egypt. Anne is not seen with the adult Christ, so was regarded as having died during the youth of Jesus.[18] Anne is also shown as the matriarch of the Holy Kinship, the extended family of Jesus, a popular subject in late medieval Germany; some versions of these pictorial and sculptural depictions include Emerentia who was reputed in the 15th Century to be Anne's mother. In modern devotions, Anne and her husband are invoked for protection for the unborn.

Virgin and Child with Saint Anne

The role of the Messiah's grandparents in salvation history was commonly depicted in early medieval devotional art in a vertical double-Madonna arrangement known as the Virgin and Child with Saint Anne. Another typical subject has Anne teaching the Virgin Mary the Scriptures (see gallery below).