Dom Nuno Álvares Pereira, O. Carm. (Portuguese pronunciation: [ˈnunu ˈaɫvɐɾɨʃ pɨˈɾɐjɾɐ]; June 24, 1360 – April 1, 1431), also spelled Nun'Álvares Pereira, was a Portuguese general of great success who had a decisive role in the 1383-1385 Crisis that assured Portugal's independence from Castile. He later became a mystic, was beatified by Pope Benedict XV in 1918 and was canonised by Pope Benedict XVI in 2009.

Nuno Álvares Pereira was born on June 24, 1360, in Flor da Rosa, near Crato, central Portugal, the illegitimate son of Dom Álvaro Gonçalves Pereira, Prior of Crato and Iria Gonçalves do Carvalhal.[1] His grandfather was Dom Gonçalo (Gonçalves) Pereira, 97th Archbishop of Braga (1326–1349). He was descended from the oldest Portuguese and Galician nobility. About a year after his birth, the child was legitimized by royal decree and so was able to receive a knightly education typical of the offspring of the noble families of the time. At 13 years of age he became page to Queen Leonor.[1] At age 16, he married Leonor de Alvim, a rich young widow,[1] daughter of João Pires de Alvim and wife Branca Pires Coelho and childless widow of Vasco Gonçalves Barroso. Three children were born to the union, two boys who died early in life, and a girl, Beatrice, who would eventually marry Afonso, first Duke of Bragança, son of King João I.[2]

Nuno began military service in 1373, when he was only 13, and helped stop an invasion from Castile. However, according to his own words, his first military campaigns were no more than skirmishes on the borders of Portugal. He was an impetuous and brave young man who soon showed himself to be an excellent leader.

When King Fernando I of Portugal died in 1383, his only heir was Beatrice, married to king John I of Castile. In order to preserve Portuguese independence, the nobles supported the claim of King Fernando's step-brother John, Master of Aviz to the throne. John was a natural son of Peter I of Portugal. After his first victory over the Castilians, in the Battle of Atoleiros (April 1384), João of Aviz named Nuno Álvares Pereira Protector and second Constable of Portugal (Condestável do Reino), in practice supreme commander of Portugal’s armies, and third Count of Ourém.[3] He was only 24 years old.

Nuno used guerilla tactics trying to dislodge the Castilian army besieging Lisbon in 1384 but plague finally drove them away.[4]

In April 1385, João of Aviz was recognized as king by the kingdom assembly (the Cortes) as John I. This triggered an invasion of the country by Juan I of Castile, in support of his wife's rights to the throne. Nuno Álvares Pereira was engaged against the northern cities loyal to the Castilians. During this time of war, he fed the hungry populations of his Castilian opposition at his own expense.[3] 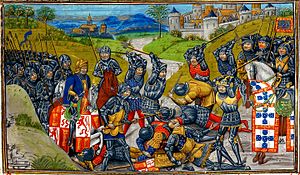 The Battle of Aljubarrota

On August 14, 1385, at Aljubarrota he led 6,500 volunteers to victory against a Castilian force of over 30,000, thus ending the threat of annexation. He attributed the victory to the Blessed Virgin, whose name, Maria, was inscribed on his sword.[3] Dedicated to Mary, he fasted on Wednesdays, Fridays and Saturdays. The banner he chose as his personal standard bore the image of the cross, of Mary and of the saintly knights James and George. At his own expense he built numerous churches and monasteries, among which was the Carmelite church in Lisbon and the church of Our Lady of Victories at Batalha.[2]

After the 1383-1385 Crisis, Álvares Pereira received from John I the titles of second Count of Arraiolos and seventh Count of Barcelos, which, along with the previous one, were the only three countdoms existing at the time and which had been taken from nobles who had taken the part of Castile. He was also made the 38th Mordomo-Mór (Major Majordomo) of the Realm.

Not wanting to give the enemy room to manoeuvre, John I and his supreme general took the offensive and raided several Castilian towns, defeating once again a much larger Castilian army at the Battle of Valverde. He continued to watch out for Juan I of Castile, until his death in 1390. When hostilities ended, he gave the bulk of his wealth to the veterans.[2] 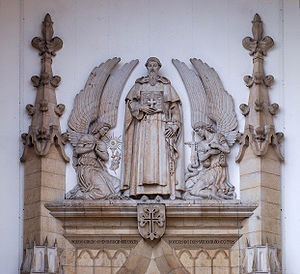 Statue of Nuno Álvares Pereira atop the portal of Santo Condestável church, Lisbon

After the death of his wife, he became a Carmelite friar (he joined the Order in 1423) at the Carmo Convent (Lisbon) which he had founded in fulfilment of a vow, and took the name of Friar Nuno of Saint Mary (Portuguese: Frei Nuno de Santa Maria). There he lived until his death on Easter Sunday of 1431. He was noted for his prayer, his practise of penance and his filial devotion to the Mother of God. Nuno suffered from debilitating arthritis.[5]

During the last year of his life, King John I went to visit and embrace him for the last time. He wept for he considered Nuno Álvares Pereira his closest friend, the one who had put him on the throne and saved his country's independence.

"Here lies that famous Nuno, the Constable, founder of the House of Bragança, excellent general, blessed monk, who during his life on earth so ardently desired the Kingdom of Heaven that after his death, he merited the eternal company of the Saints. His worldly honors were countless, but he turned his back on them. He was a great Prince, but he made himself a humble monk. He founded, built and endowed this church in which his body rests."

He had been on the point of being canonised by decree in 1940 by Pope Pius XII. According to a recent statement by the postulator general of the Carmelite Order, his canonisation was postponed for diplomatic reasons (the Portuguese ambassador indicated that the time was not right).[6]

On July 3, 2008, Pope Benedict XVI signed two decrees in Rome, promulgating the heroic virtues of Nuno and the authenticity of a miracle that had already been previously confirmed as such by medical and theological commissions. By this act, the pope formally canonised Friar Nuno de Santa Maria Álvares Pereira. The public celebration of his canonisation took place on April 26, 2009, in Saint Peter's Square in the Vatican City. The Carmelites now celebrate St Nuno on November 6; the date also appointed for his feast in Portugal.

Lord God,
you called Saint Nuno Álvares Pereira
to put aside his sword and follow Christ
under the Patronage of Our Lady of Mount Carmel.
Through his prayers may we too deny ourselves,
and devote ourselves to you with all our hearts.
We ask this through Christ, Our Lord.

The Blessed Nuno Society is a mission society and prayer apostolate officially recognized by the Catholic Church as a diocesan Private Association of the Christian Faithful and affiliated with, the Catholic Diocese of Duluth, Minnesota.[3]

Nuno Álvares Pereira had a daughter by his marriage to Leonor de Alvim, Beatriz Pereira de Alvim, who later became the wife of Afonso, first Duke of Braganza. Therefore, Nuno Álvares Pereira was, through the female line, the ancestor of the House of Braganza which became the Portuguese royal house in the 17th century, ruling the Kingdom of Portugal (1640–1910), the Kingdom of Brazil (1815–1822) and the Empire of Brazil (1822–1889).