Saint David (Welsh: Dewi Sant, Latin: Davidus; c. 500 – c. 589) was a Welsh bishop of Menevia during the 6th century; he was later regarded as a saint. He is the patron saint of Wales. David was a native of Wales, and a relatively large amount of information is known about his life. However, his birth date is uncertain: suggestions range from 462 to 512.[1] He is traditionally believed to be the son of Saint Non and the grandson of Ceredig ap Cunedda, king of Ceredigion.[2] The Welsh annals placed his death 569 years after the birth of Christ,[3] but Phillimore's dating revised this to 601.[4]

Many of the traditional tales about David are found in the Buchedd Dewi, a hagiography written by Rhygyfarch in the late 11th century. Rhygyfarch claimed it was based on documents found in the cathedral archives. Modern historians are sceptical of some of its claims: one of Rhygyfarch's aims was to establish some independence for the Welsh church, which had refused the Roman rite until the 8th century and now sought a metropolitan status equal to that of Canterbury. (This may apply to the supposed pilgrimage to Jerusalem where he was anointed as an archbishop by the patriarch).

The tradition that he was born at Henvynyw (Vetus-Menevia) in Cardiganshire is not improbable.[1] He became renowned as a teacher and preacher, founding monastic settlements and churches in Wales, Dumnonia, and Brittany. St David's Cathedral stands on the site of the monastery he founded in the Glyn Rhosyn valley of Pembrokeshire. Around 550, he attended the Synod of Brefi, where his eloquence in opposing Pelagianism caused his fellow monks to elect him primate of the region. As such he presided over the synod of Caerleon (the "Synod of Victory") around 569.[5] 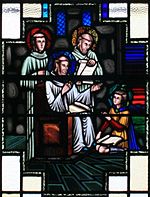 St. David as teacher of
St. Finnian in a stained glass window at Clonard

His best-known miracle is said to have taken place when he was preaching in the middle of a large crowd at the Synod of Brefi: the village of Llanddewi Brefi stands on the spot where the ground on which he stood is reputed to have risen up to form a small hill. A white dove, which became his emblem, was seen settling on his shoulder. John Davies notes that one can scarcely "conceive of any miracle more superfluous" in that part of Wales than the creation of a new hill.[6] David is said to have denounced Pelagianism during this incident and he was declared archbishop by popular acclaim according to Rhygyfarch,[7] bringing about the retirement of Dubricius. St David's metropolitan status as an archbishopric was later supported by Bernard, Bishop of St David's, Geoffrey of Monmouth and Gerald of Wales.

The Monastic Rule of David prescribed that monks had to pull the plough themselves without draught animals,[5] must drink only water and eat only bread with salt and herbs, and spend the evenings in prayer, reading and writing. No personal possessions were allowed: even to say "my book" was considered an offence. He lived a simple life and practised asceticism, teaching his followers to refrain from eating meat and drinking beer. His symbol, also the symbol of Wales, is the leek (this largely comes from a reference in Shakespeare's Henry V, Act V scene 1) :

Fluellen: "If your Majesty is remembered of it, the Welshmen did good service in a garden where leeks did grow, wearing leeks in their Monmouth caps, which your Majesty knows, to this hour is an honourable badge of the service, and I do believe, your Majesty takes no scorn to wear the leek upon Saint Tavy's day". King Henry: "I wear it for a memorable honour; for I am Welsh, you know, good countryman".

Rhygyfarch counted Glastonbury Abbey among the churches David founded.[8] Around forty years later William of Malmesbury, believing the Abbey older, said that David visited Glastonbury only to rededicate the Abbey and to donate a travelling altar including a great sapphire. He had had a vision of Jesus who said that "the church had been dedicated long ago by Himself in honour of His Mother, and it was not seemly that it should be re-dedicated by human hands". So David instead commissioned an extension to be built to the abbey, east of the Old Church. (The dimensions of this extension given by William were verified archaeologically in 1921). One manuscript indicates that a sapphire altar was among the items King Henry VIII confiscated from the abbey at its dissolution a thousand years later. 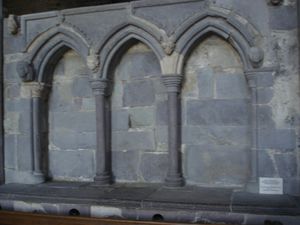 The Shrine of Saint David,
St David's Cathedral, prior to its reconstruction in the early twenty-first century. 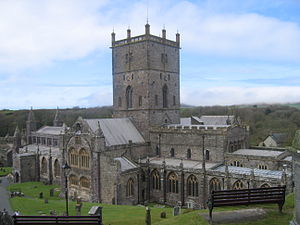 It is claimed that David lived for over 100 years, and that he died on a Tuesday 1 March (now Saint David's Day). It is generally accepted that this was around 589, and 1 March fell on a Tuesday in 589.[citation needed] The monastery is said to have been "filled with angels as Christ received his soul." His last words to his followers were in a sermon on the previous Sunday. The Welsh Life of St David gives these as: "Bydwch lawen a chedwch ych ffyd a'ch cret, a gwnewch y petheu bychein a glywyssawch ac a welsawch gennyf i. A mynheu a gerdaf y fford yd aeth an tadeu idi",[9] which translates as, "Be joyful, and keep your faith and your creed, and do the little things that you have seen me do and heard about. I will walk the path that our fathers have trod before us." "Do ye the little things in life" ("Gwnewch y pethau bychain mewn bywyd") is today a very well known phrase in Welsh.

David was buried at St David's Cathedral at St David's, Pembrokeshire, where his shrine was a popular place of pilgrimage throughout the Middle Ages. During the 10th and 11th centuries the Cathedral was regularly raided by Vikings, who removed the shrine from the church and stripped off the precious metal adornments. In 1275 a new shrine was constructed, the ruined base of which remains to this day (see photo), which was originally surmounted by an ornamental wooden canopy with murals of St David, St Patrick and St Denis of France. The relics of St David and St Justinian were kept in a portable casket on the stone base of the shrine. It was at this shrine that Edward I came to pray in 1284. During the reformation Bishop Barlow (1536–48), a staunch Protestant, stripped the shrine of its jewels and confiscated the relics of David and Justinian.

David was officially recognized at the Vatican by Pope Callixtus II in 1120, thanks to the work of Bernard, Bishop of St David's. Music for his office has been edited by O.T. Edwards in Matins, Lauds and Vespers for St David's Day: the Medieval Office of the Welsh Patron Saint in National Library of Wales MS 20541 E (Cambridge, 1990). David was also canonized by the Eastern Orthodox Church at an unknown date.

Over 50 churches in South Wales were dedicated to him in pre-Reformation days.[5]

In the 2004 edition of the Roman Martyrology, David is listed under 1 March with the Latin name Dávus. He is recognised as bishop of Menevia in Wales who governed his monastery following the example of the Eastern Fathers. Through his leadership, many monks went forth to evangelise Wales, Ireland, Cornwall and Armorica (Brittany and surrounding provinces).[10]

The restored Shrine of St David was unveiled and re-dedicated by the Right Reverend Wyn Evans, Bishop of St Davids, at a Choral Eucharist on St David's Day 2012.

Local tradition says that during a battle against the Saxons, David advised the Welsh warriors to each wear a leek in his hat or armor so that the warriors might distinguish themselves from their enemies. Ever since that time, Welsh wear leeks every 1 March in memory of David.[11]

He is usually represented standing on a little hill, with a dove on his shoulder.[1] 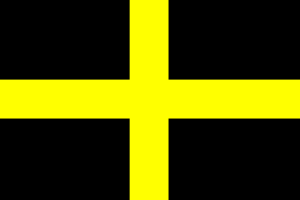 The Flag of Saint David

David's popularity in Wales is shown by the Armes Prydein Fawr, of around 930, a popular poem which prophesied that in the future, when all might seem lost, the Cymry (the Welsh people) would unite behind the standard of David to defeat the English; "A lluman glân Dewi a ddyrchafant" ("And they will raise the pure banner of Dewi").

Although David's role in spreading of Christianity on the continent belongs to the realm of legend, he inspired numerous place names in Brittany including Saint-Divy, Saint-Yvy and Landivy.

David's life and teachings have inspired a choral work by Welsh composer Karl Jenkins, Dewi Sant. It is a seven-movement work best known for the classical crossover series Adiemus, which intersperses movements reflecting the themes of David's last sermon with those drawing from three Psalms. An oratorio by another Welsh composer Arwel Hughes, also entitled Dewi Sant, was composed in 1950.

Saint David is also thought to be associated with corpse candles, lights that would warn of the imminent death of a member of the community. The story goes that David prayed for his people to have some warning of their death, so that they could prepare themselves. In a vision, David's wish was granted and told that from then on, people who lived in the land of Dewi Sant (Saint David) "would be forewarned by the dim light of mysterious tapers when and where the death might be expected." The colour and/or size of the tapers indicated whether the person to die would be a woman, man, or child.[12]