Saint David's Day (Welsh: Dydd Gŵyl Dewi, Welsh pronunciation: [dɨːð ɡʊɨl ˈdɛui]) is the feast day of Saint David, the patron saint of Wales, and falls on 1 March each year. The first day of March was chosen in remembrance of the death of Saint David. Tradition holds that he died on that day in 569.[1] The date was declared a national day of celebration within Wales in the 18th century.

Significance of the day

Saint David (Welsh: Dewi Sant) was born towards the end of the 5th century. He was a scion of the royal house of Ceredigion, and founded a Celtic monastic community at Glyn Rhosyn (The Vale of Roses) on the western headland of Pembrokeshire (Sir Benfro), at the spot where St David's Cathedral stands today. David's fame as a teacher and ascetic spread throughout the Celtic world. His foundation at Glyn Rhosin became an important Christian shrine, and the most important centre in Wales. The date of Saint David's death is recorded as 1 March, but the year is uncertain – possibly 588. As his tearful monks prepared for his death Saint David uttered these words: "Brothers be ye constant. The yoke which with single mind ye have taken, bear ye to the end; and whatsoever ye have seen with me and heard, keep and fulfil."

For centuries, 1 March has been a national festival. Saint David was recognised as a national patron saint at the height of Welsh resistance to the Normans. Saint David's Day was celebrated by Welsh diaspora from the late Middle Ages. Indeed, the 17th-century diarist Samuel Pepys noted how Welsh celebrations in London for Saint David's Day would spark wider countercelebrations amongst their English neighbours: life-sized effigies of Welshmen were symbolically lynched,[4] and by the 18th century the custom had arisen of confectioners producing "taffies"—gingerbread figures baked in the shape of a Welshman riding a goat—on Saint David's Day.[5]

Saint David's Day is not a national holiday in the United Kingdom. Similarly in the United States of America, it has regularly been celebrated, although it is not an official holiday. It is invariably celebrated by Welsh societies throughout the world with dinners, parties, and eisteddfodau (recitals and concerts).

In the poem Armes Prydain, composed in the early to mid-tenth century AD, the anonymous author prophesies that the Cymry (the Welsh people) will unite and join an alliance of fellow-Celts to repel the Anglo-Saxons, under the banner of Saint David: A lluman glân Dewi a ddyrchafant (And they will raise the pure banner of Dewi).[6] Although there were periodic Welsh uprisings in the Middle Ages, the country was briefly united by various Welsh princes before it's conquest[7] at different times and it arguably had a very short period of independence during the rising of Owain Glyndwr,[8] but it never experienced a long period as an independent kingdom. In 1485, Henry VII of England, whose ancestry was partly Welsh, became King of England after victory at the Battle of Bosworth Field; his green and white banner, with a red dragon, was adapted in 1959 to become the new Flag of Wales. Henry was the first monarch of the House of Tudor: during this dynasty the royal coat of arms included a Welsh dragon, a reference to the monarch's origins. The Flag of Saint David, though, is a golden cross on a black background: this was not originally part of the symbolism of Henry VII of England. 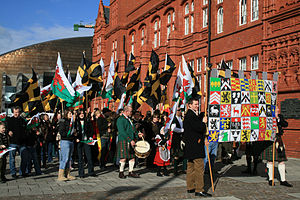 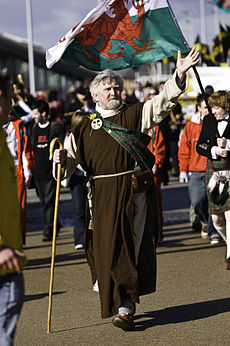 Parades are held around Wales each year to commemorate Saint David, the largest of which in Cardiff. The parade is a non-military celebration of Welsh heritage and culture.[9]

To mark Saint David's Day, and their return from a six-month tour of Afghanistan, soldiers from the Royal Welsh Regiment provided The Changing of the Guard ceremony at Cardiff Castle's south gate on 27 and 28 February 2010.[10]

Public celebrations of Saint David's Day, although still small in number, are becoming more commonplace. In many towns an annual parade through the centre of town is now held. Concerts are held in pubs, clubs, and other venues.

In the town of Colwyn Bay in north Wales, an annual parade through the centre of town is now held with several hundred citizens and schoolchildren taking part. Other events are centred on the parade.[13]

The town of Prestatyn closes the top of the High Street for local schools to participate in Welsh singing and local fundraising.

Swansea inaugurated a St David's Week festival in 2009 with a range of musical, sporting and cultural events held throughout the city to mark the national day.[14]

The Los Angeles St. David's Day Festival - National Day of Wales is the largest annual event of its kind in the United States encompassing an eisteddfod, Celtic marketplace, classes, and a concert.[16] 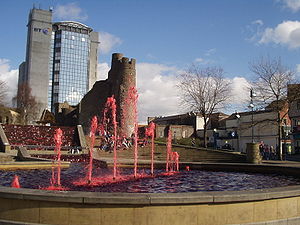 Children in Wales take part in school concerts or eisteddfodau, with recitation and singing being the main activities. Formerly, a half-day holiday was afforded to school children. Officially this custom does not continue, although the practice can vary on a school-to-school basis.

Additionally, various Welsh Regiments of the British Army utilize aspects of Saint David's cross, Saint David himself, or songs of Saint David in their formalities during the celebrations. Many Welsh people wear one or both of the National symbols of Wales to celebrate St. David: the daffodil (a generic Welsh symbol) or the leek (Saint David's personal symbol) on this day. The leek arises from an occasion when a troop of Welsh were able to distinguish each other from a troop of English enemy dressed in similar fashion by wearing leeks.[17] The Younger girls sometimes wear traditional Welsh costumes to school. This costume consists of a long woollen skirt, white blouse, woollen shawl and a Welsh hat.

The flag of Saint David often plays a central role in the celebrations and can be seen flying throughout Wales.

Cawl is frequently prepared and consumed on Saint David's Day.