Saint Dominic (Spanish: Santo Domingo), also known as Dominic of Osma and Dominic of Caleruega, often called Dominic de Guzmán and Domingo Félix de Guzmán (1170 – August 6, 1221), was a Spanish priest and founder of the Dominican Order. Dominic is the patron saint of astronomers.

Dominic was born in Caleruega,[3] halfway between Osma and Aranda de Duero in Old Castile, Spain. He was named after Saint Dominic of Silos, who is said to be the patron saint of hopeful mothers. The Benedictine abbey of Santo Domingo de Silos lies a few miles north of Caleruega. 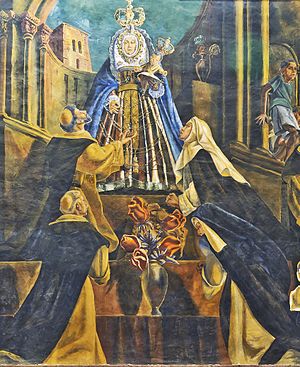 In this painting depicted the Virgin giving the rosary to Saint Dominic. In the scene also appear Fray Pedro de Santa María Ulloa, Saint Catherine of Siena and Servant of God, Mary of Jesus de León y Delgado. The fresco is located in the Church of Santo Domingo in San Cristóbal de La Laguna (Tenerife, Spain).

In the earliest narrative source, by Jordan of Saxony, Dominic's parents are named Felix Guzman and Juanna of Aza. The story is told that before his birth his barren mother made a pilgrimage to the Abbey at Silos,[4] and dreamed that a dog leapt from her womb carrying a torch in its mouth, and "seemed to set the earth on fire". This story drew resonance from the fact that his order became known, after his name, as the Dominican order, Dominicanus in Latin which a play on words interpreted as Domini canis: "Dog of the Lord." Jordan adds that Dominic was brought up by his parents and a maternal uncle who was an archbishop.[5] The failure to name his parents is not unusual, since Jordan wrote a history of the Order's early years, rather than a biography of Dominic. A later source, still of the 13th century, gives their names as Juana and Felix.[6] Nearly a century after Dominic's birth, a local author asserted that Dominic's father was "vir venerabilis et dives in populo suo" ("an honoured and wealthy man in his village").[7] The travel narrative of Pero Tafur, written circa 1439 (about a pilgrimage to Dominic's tomb in Italy), states that Dominic's father belonged to the family de Guzmán, and that his mother belonged to the Aça or Aza family.[8] Dominic's mother, Jane of Aza, was beatified by Pope Leo XII in 1828.

Dominic was educated in the schools of Palencia (they became a university soon afterwards) where he devoted six years to the arts and four to theology.[9] In 1191, when Spain was desolated by famine,[10] young Dominic gave away his money and sold his clothes, furniture and even precious manuscripts to feed the hungry. Dominic reportedly told his astonished fellow students, "Would you have me study off these dead skins, when men are dying of hunger?"[11] In 1194, around age twenty-five, Dominic joined the Canons Regular in the canonry of Osma, following the rule of Saint Benedict.[12]

In 1203 or 1204 he accompanied Diego de Acebo, the Bishop of Osma, on a diplomatic mission for Alfonso VIII, King of Castile, to secure a bride in Denmark for crown prince Ferdinand.[13] The envoys traveled to Denmark via Aragon and the south of France. The marriage negotiations ended successfully, but the princess died before leaving for Castile.[3]

In the south of France, Dominic and Diego de Acebo began a program to convert the Cathars, a Christian religious sect with gnostic and dualistic beliefs, which the Roman Catholic Church deemed heretical; as part of this, Catholic-Cathar public debates were held at Verfeil, Servian, Pamiers, Montréal and elsewhere. Dominic concluded that only preachers who displayed real sanctity, humility and asceticism could win over convinced Cathar believers; the institutional Church as a general rule did not possess these spiritual warrants.[14] However, even Dominic managed only a few converts among the Cathari.

Foundation of the Dominicans 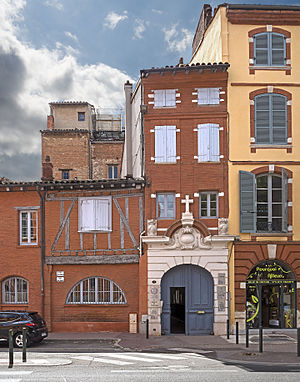 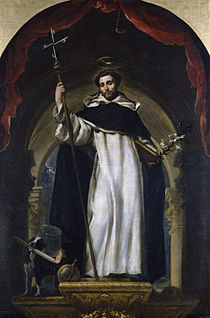 In 1215, Dominic established himself, with six followers, in a house given by Peter Seila, a rich resident of Toulouse.[15] Dominic saw the need for a new type of organization to address the spiritual needs of the growing cities of the era, one that would combine dedication and systematic education, with more organizational flexibility than either monastic orders or the secular clergy. He subjected himself and his companions to the monastic rules of prayer and penance; and meanwhile bishop Foulques gave them written authority to preach throughout the territory of Toulouse.[16]

In the same year, the year of the Fourth Lateran Council, Dominic and Foulques went to Rome to secure the approval of the Pope, Innocent III. Dominic returned to Rome a year later, and was finally granted written authority in December 1216 and January 1217 by the new pope, Honorius III for an order to be named "The Order of Preachers" ("Ordo Praedicatorum", or "O.P.," popularly known as the Dominican Order).

Blessed Cecilia Caesarini, who was received by St. Dominic into his new order, in her old age described him as "...thin and of middle height. His face was handsome and somewhat fair. He had reddish hair and beard and beautiful eyes. ...His hands were long and fine and his voice pleasingly resonant. He never got bald, though he wore the full tonsure, which was mingled with a few grey hairs."[17]

Although he traveled extensively to maintain contact with his growing brotherhood of friars,[18] Dominic made his headquarters at Rome.[19] In 1219, Pope Honorius III invited Saint Dominic and his companions to take up residence at the ancient Roman basilica of Santa Sabina, which they did by early 1220. Before that time the friars had only a temporary residence in Rome at the convent of San Sisto Vecchio, which Honorius III had given to Dominic circa 1218, intending it to become a convent for a reformation of nuns at Rome under Dominic's guidance. The official foundation of the Dominican convent at Santa Sabina with its studium conventuale, the first Dominican studium in Rome, occurred with the legal transfer of property from Pope Honorius III to the Order of Preachers on June 5, 1222, though the brethren had taken up residence there already in 1220.[20] The studium at Santa Sabina was the forerunner of the studium generale at Santa Maria sopra Minerva. The latter would be transformed in the 16th century into the College of Saint Thomas (Latin: Collegium Divi Thomæ), and then in the 20th century into the Pontifical University of Saint Thomas Aquinas, Angelicum sited at the convent of Saints Dominic and Sixtus.

It was in the winter of 1216–1217, at the house of Ugolino de' Conti that he first met William of Montferrat, Dominican friar, afterwards a close friend.[21]

According to Guiraud, Dominic abstained from meat,[22] "observed stated fasts and periods of silence",[23] "selected the worst accommodations and the meanest clothes", and "never allowed himself the luxury of a bed".[24][25] "When travelling, he beguiled the journey with spiritual instruction and prayers" (also Guiraud).[26] Guiraud also states that "as soon as Dominic passed the limits of towns and villages, he took off his shoes, and, however sharp the stones or thorns, he trudged on his way barefooted",[24] and that "rain and other discomforts elicited from his lips nothing but praises to God".[24] 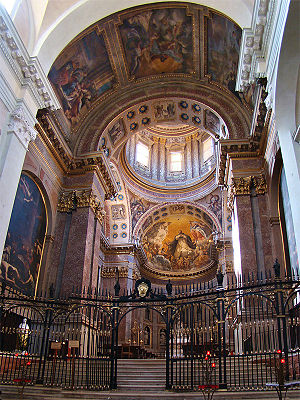 Dominic arrived in Bologna on 21 December 1218.[27] A convent was established at the Mascarella church by the Blessed Reginald of Orléans.[28] Soon afterwards they had to move to the church of San Nicolò of the Vineyards.[29] Dominic settled in this church and held here the first two General Chapters of the order.[30][31]

Dominic died at the age of fifty-one, according to Guiraud "exhausted with the austerities and labours of his career".[32] He had reached the convent of St Nicholas at Bologna, Italy, "weary and sick with a fever".[32] Guiraud states that Dominic "made the monks lay him on some sacking stretched upon the ground"[32] and that "the brief time that remained to him was spent in exhorting his followers to have charity, to guard their humility, and to make their treasure out of poverty".[33] He died at noon on 6 August 1221. His body was moved to a simple sarcophagus in 1233.[34][35] Under the authority of Pope Gregory IX, Dominic was canonized in 1534. In 1267 Dominic's remains were moved to the shrine, made by Nicola Pisano and his workshop.[35] 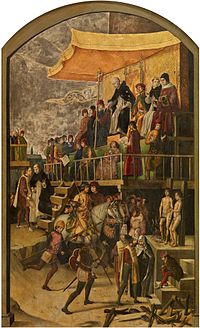 What part Dominic personally had in the proceedings of the Medieval Inquisition has been disputed for centuries.[37][38] The historical sources from Dominic’s own time period reveal nothing about his involvement in the Inquisition.[39] As one recent historian states, "Was Dominic the first of the inquisitors? The answer is categorically: By no means! Simple chronology suffices to resolve the problem: Dominic died in 1221, and the office of the Inquisition was not established until 1231 in Lombardy and 1234 in Languedoc." [40] In fact, several early Dominicans did become inquisitors.[41] But later on, the difference between Dominic and some of his early followers would be obscured. For example, in the 15th century, the Spanish Inquisition commissioned the artist Peter Beruguette to depict Dominic presiding at an auto da fé. Thus, the Spanish inquisitors promoted a historical legend for the sake of auto-justification.[42] Reacting against the Spanish tribunals, 16th- and 17th-century Protestant polemicists gladly developed and perpetuated the legend of Dominic the Inquisitor.[43] This image gave German Protestant critics of the Catholic Church an argument against the Dominican Order whose preaching had proven to be a formidable opponent in the lands of the Reformation.[44] As Edward Peters notes, “In Protestant historiography of the sixteenth century a kind of anti-cult of St. Dominic grew up.” [43] Thus we see how Dominic the Inquisitor, the invention of Catholic and Protestant polemicists, became one of the most famous figures in the Black Legend.

The spread of the Rosary, a Marian devotion, is attributed to the preaching of St. Dominic.[45][46] The Rosary has for centuries been at the heart of the Dominican Order. Pope Pius XI stated, "The Rosary of Mary is the principle and foundation on which the very Order of Saint Dominic rests for making perfect the life of its members and obtaining the salvation of others." For centuries, Dominicans have been instrumental in spreading the rosary and emphasizing the Catholic belief in the power of the rosary.[47] The feast of St. Dominic is celebrated with great pomp and devotion in Malta, in the old city of Birgu and the capital city Valletta. The Dominican order has very strong links with Malta and as a matter of fact, Pope St. Pius V, a Dominican friar himself, aided the Knights of St. John to build the city of Valletta. [48]