Saint George and the Dragon

From Infogalactic: the planetary knowledge core
Jump to: navigation, search
For other uses, see Saint George and the Dragon (disambiguation). 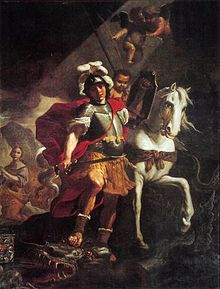 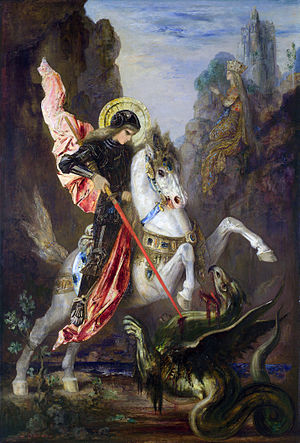 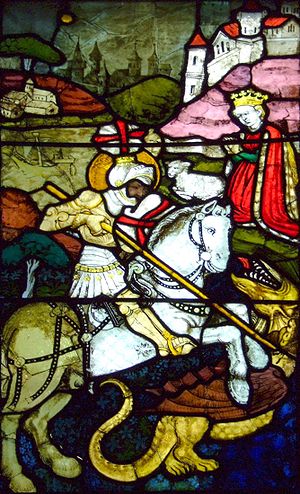 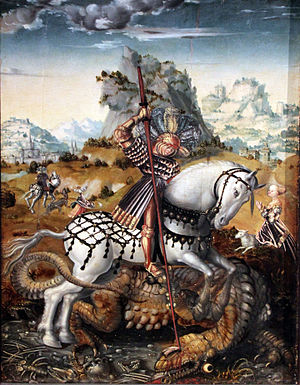 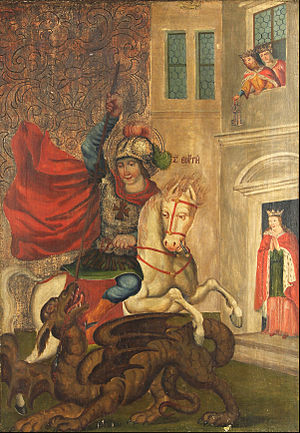 The episode Saint George and the Dragon appended to the hagiography of Saint George was Eastern in origin,[1][2] brought back with the Crusaders and retold with the courtly appurtenances belonging to the genre of Romance. The earliest known depictions of the motif are from tenth- or eleventh-century Cappadocia[3] and eleventh-century Georgia;[4] previously, in the iconography of Eastern Orthodoxy, George had been depicted as a soldier since at least the seventh century. The earliest known surviving narrative of the dragon episode is an eleventh-century Georgian text.[5]

The dragon motif was first combined with the already standardised Passio Georgii in Vincent of Beauvais' encyclopedic Speculum Historiale, and then Jacobus de Voragine's Golden Legend (ca 1260) guaranteed its popularity in the later Middle Ages as a literary and pictorial subject.[6] The legend gradually became part of the Christian traditions relating to Saint George and was used in many festivals thereafter.[7] 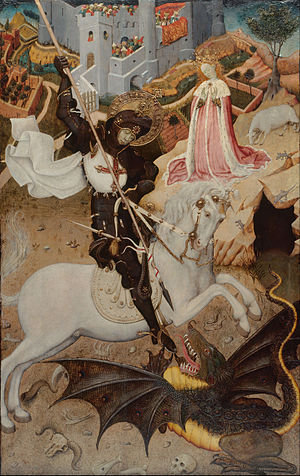 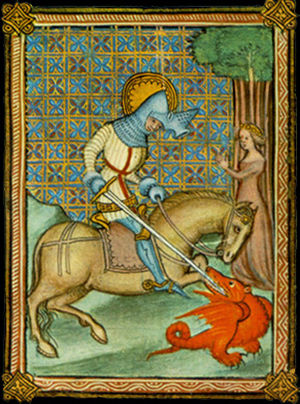 Saint George defeating the dragon and saving the princess.

According to the Golden Legend, the narrative episode of Saint George and the Dragon took place somewhere he called "Silene", in Libya; the Golden Legend is the first to place this story in Libya as a sufficiently exotic locale, where a dragon might be found. In the tenth-century Georgian narrative, the place is the fictional city of Lasia, and the idolatrous emperor who rules the city is called Selinus.[8]

The town had a pond, as large as a lake, where a plague-bearing dragon dwelt that poisoned all the countryside. To appease the dragon, the people of Silene used to feed it two sheep every day, and when the sheep failed, they fed it their children, chosen by lottery. It happened that the lot fell on the king's daughter, who is called Sabra in some versions of the story.[9] The king, distraught with grief, told the people they could have all his gold and silver and half of his kingdom if his daughter were spared; the people refused. The daughter was sent out to the lake, dressed as a bride, to be fed to the dragon.[8]

Saint George by chance rode past the lake. The princess, trembling, sought to send him away, but George vowed to remain. The dragon reared out of the lake while they were conversing. Saint George fortified himself with the Sign of the Cross,[10] charged it on horseback with his lance, and gave it a grievous wound. He then called to the princess to throw him her girdle, and he put it around the dragon's neck. When she did so, the dragon followed the girl like a meek beast on a leash.[citation needed]

The princess and Saint George led the dragon back to the city of Silene, where it terrified the people at its approach. But Saint George called out to them, saying that if they consented to become Christians and be baptised, he would slay the dragon before them. The king and the people of Silene converted to Christianity, George slew the dragon, and the body was carted out of the city on four ox-carts. "Fifteen thousand men baptized, without women and children." On the site where the dragon died, the king built a church to the Blessed Virgin Mary and Saint George, and from its altar a spring arose whose waters cured all disease.[11]

Traditionally, the sword[12] with which St. George slew the dragon was called Ascalon, a name recalling the city of Ashkelon, Israel. From this tradition, the name Ascalon was used by Winston Churchill for his personal aircraft during World War II (records at Bletchley Park), since St. George is the Patron Saint of England.[citation needed]

In a later version of the legend,[citation needed] St. George travelled for many months by land and sea until he came to Libya. Here he met a poor hermit who told him that everyone in that land was in great distress, for a dragon had long ravaged the country.

'Every day,' said the old man, 'he demands the sacrifice of a beautiful maiden and now all the young girls have been killed. The king's daughter alone remains, and unless we can find a knight who can slay the dragon she will be sacrificed tomorrow. The king of Egypt will give his daughter in marriage to the champion who overcomes this terrible monster.'

When St. George heard this story, he was determined to try and save the princess, so he rested that night in the hermit's hut, and at daybreak set out to the valley where the dragon lived. When he drew near he saw a little procession of women, headed by a beautiful girl dressed in pure Arabian silk. The princess Sabra was being led by her attendants to the place of death. The knight spurred his horse and overtook the ladies. He comforted them with brave words and persuaded the princess to return to the palace. Then he entered the valley.

As soon as the dragon saw him it rushed from its cave, roaring with a sound louder than thunder. Its head was immense and its tail fifty feet long. But St. George was not afraid. He struck the monster with his spear, hoping he would wound it.

The dragon's scales were so hard that the spear broke into a thousand pieces. and St. George fell from his horse. Fortunately he rolled under an enchanted orange tree against which poison could not prevail, so that the venomous dragon was unable to hurt him. Within a few minutes he had recovered his strength and was able to fight again.

He smote the beast with his sword, but the dragon poured poison on him and his armour split in two. Once more he refreshed himself from the orange tree and then, with his sword in his hand, he rushed at the dragon and pierced it under the wing where there were no scales, so that it fell dead at his feet.

Advance our standards, set upon our foes Our ancient world of courage fair
St. George Inspire us with the spleen of fiery dragons..... Richard III. act v, sc.3.

The village of Wormingford in Essex, England also lays claim to the George and the Dragon legend. A dragon, now believed to have been a crocodile that escaped from Richard I, was slain in the River Stour. There are differing accounts, including different dragon slayers, however one popular account tells how Sir George Marney (of Layer de la Haye) killed the dragon with his lance. The church in Wormingford (which is dedicated to St Andrew) has a stained glass window depicting this scene.[25][26]

One version of the tale tells St. George as losing the battle with the dragon early on in the encounter. St. George retreats, and wanders down to the river. He prays over his challenges, and removes his armor to melt it down. He takes the melted metal and forges it into a metal box. He places his fears, doubts, and lack of faith inside the box, and goes out to face the dragon again, without armor. St. George instantly slays the dragon.[citation needed]