Januarius (Latin: Ianuarius; Italian: Gennaro), also known as Januarius I of Benevento, was Bishop of Benevento and is a martyr and saint of the Roman Catholic and the Eastern Orthodox Churches. While no contemporary sources on his life are preserved, later sources and legends claim that he died during the Great Persecution[2] which ended with Diocletian's retirement in 305.

Januarius is the patron saint of Naples, where the faithful gather three times a year in Naples Cathedral to witness the liquefaction of what is claimed to be a sample of his blood kept in a sealed glass ampoule.

Little is known of the life of Januarius,[2] and what follows is mostly derived from later Christian sources, such as the Acta Bononensia (BHL 4132, not earlier than 6th century) and the Acta Vaticana (BHL 4115, 9th century), and from later-developing folk tradition.

According to various hagiographies, Januarius was born in Benevento to a rich patrician family that traced its descent to the Caudini tribe of the Samnites. At a young age of 15, he became local priest of his parish in Benevento, which at the time was relatively pagan. When Januarius was 20, he became Bishop of Naples and befriended Juliana of Nicomedia and Saint Sossius whom he met during his priestly studies. During the ​1 1⁄2-year-long persecution of Christians by Emperor Diocletian, he hid his fellow Christians and prevented them from being caught. Unfortunately, while visiting Sossius in jail, he too was arrested. He and his colleagues were condemned to be thrown to wild bears in the Flavian Amphitheater at Pozzuoli, but the sentence was changed due to fear of public disturbances, and they were instead beheaded at the Solfatara crater near Pozzuoli.[n 1] Other legends state either that the wild beasts refused to eat them, or that he was thrown into a furnace but came out unscathed.

The earliest extant mention of him is contained in a 432 letter by Uranius, bishop of Nola, on the death of his mentor Saint Paulinus of Nola,[3][4] where it is stated that the ghosts of Januarius and Saint Martin appeared to Paulinus three days before the latter's death in 431. About Januarius, the account says only that he was "bishop as well as martyr, an illustrious member of the Neapolitan church".[n 2] The Acta Bononensia says that "At Pozzuoli in Campania [is honored the memory] of the holy martyrs Januarius, Bishop of Beneventum, Festus his deacon, and Desiderius lector, together with Sossius deacon of the church of Misenum, Proculus, deacon of Pozzuoli, Eutyches, and Acutius, who after chains and imprisonment were beheaded under the emperor Diocletian".

The Feast of St Januarius or San Gennaro is celebrated on 19 September in the calendar of the Catholic Church.[5][n 3] In the Eastern Church, it is celebrated on 21 April.[7] The city of Naples has more than fifty official patron saints, although its principal patron is Saint Januarius.[8]

In the United States, the "Feast of San Gennaro" is also a highlight of the year for New York's Little Italy, with the saint's polychrome statue carried through the middle of a street fair stretching for blocks. 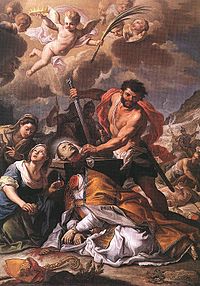 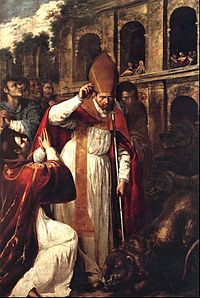 The Martyrdom of St Januarius, by Artemisia Gentileschi (1636) 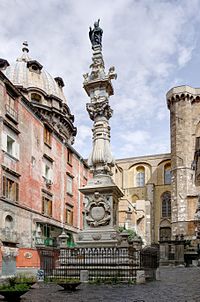 The spire of the Cattedrale di San Gennaro (Naples Cathedral)

According to an early hagiography,[n 4] Januarius's relics were transferred by order of Saint Severus, Bishop of Naples, to the Neapolitan catacombs "outside the walls" (extra moenia).[10][n 5] In the early ninth century the body was moved to Beneventum by Sico, prince of Benevento, with the head remaining in Naples. Subsequently, during the turmoil at the time of Frederick Barbarossa, his body was moved again, this time to the Territorial Abbey of Montevergine where it was rediscovered in 1480.

At the instigation of Cardinal Oliviero Carafa, his body was finally transferred in 1497 to Naples, where he is the city's patron saint. Carafa commissioned a richly decorated crypt, the Succorpo, beneath the cathedral to house the reunited body and head properly. The Succorpo was finished in 1506 and is considered one of the prominent monuments of the High Renaissance in the city.[12]

Saint Januarius is famous for the alleged miracle of the annual liquefaction of his blood, which, according to legend, was saved by a woman called Eusebia just after the saint's death. A chronicle of Naples written in 1382 describes the cult of Saint Januarius in detail, but mentions neither the relic nor the miracle.[13][14] The first certain date is 1389, when it was found to have melted.[15][16] Then, over the following two and a half centuries official reports began to appear declaring that the blood spontaneously melted, at first once a year, then twice, and finally three times a year. While the report of the very first incidence of liquefaction did not make any explicit reference to the skull of the saint, soon afterwards assertions began to appear that this relic was activating the melting process, as if the blood, recognizing a part of the body to which it belonged, “were impatient while waiting for its resurrection”.[17] This explanation was definitively abandoned only in the eighteenth century.[18]

Thousands of people assemble to witness this event in Naples Cathedral three times a year: on September 19 (Saint Januarius's Day, commemorating his martyrdom), on December 16 (celebrating his patronage of Naples and its archdiocese), and on the Saturday before the first Sunday of May (commemorating the reunification of his relics).[19]

The blood is also said to spontaneously liquefy at certain other times, such as papal visits. It liquefied in the presence of Pope Pius IX in 1848, but not that of John Paul II in 1979 or Benedict XVI in 2007.[20] On March 21, 2015, Pope Francis venerated the dried blood during a visit to Naples Cathedral, saying the Lord's Prayer over it and kissing it. Archbishop Sepe then declared that "The blood has half liquefied, which shows that Saint Januarius loves our pope and Naples."[21] Francis replied, "The bishop just announced that the blood half liquefied. We can see the saint only half loves us. We must all spread the Word, so that he loves us more!"[21]

The blood is stored in two hermetically sealed small ampoules, held since the 17th century in a silver reliquary between two round glass plates about 12 cm wide. The smaller ampoule (of cylindrical shape) contains only a few reddish spots on its walls, the bulk having allegedly been removed and taken to Spain by Charles III. The larger ampoule, with capacity of about 60 ml and almond-shaped, is about 60% filled with a dark reddish substance.[8][13] Separate reliquaries hold bone fragments believed to belong to Saint Januarius.

For most of the time, the ampoules are kept in a bank vault, whose keys are held by a commission of local notables, including the Mayor of Naples; while the bones are kept in a crypt under the main altar of Naples Cathedral. On feast days, all these relics are taken in procession from the cathedral to the Monastery of Santa Chiara, where the archbishop holds the reliquary up and tilts it to show that the contents are solid, and places it on the high altar next to the saint's other relics. After intense prayers by the faithful, including the so-called "relatives of Saint Januarius" (parenti di San Gennaro), the content of the larger vial typically liquefies. The archbishop then holds up the vial and tilts it again to demonstrate that liquefaction has taken place. The announcement of the liquefaction is greeted with a 21-gun salute at the 13th-century Castel Nuovo. The ampoules remain exposed on the altar for eight days, while the priests move or turn them periodically to show that the contents remain liquid.[8]

The liquefaction sometimes takes place almost immediately, but can take hours or even days. Records kept at the Duomo tell that on rare occasions the contents fail to liquefy, are found already liquefied when the ampoules are taken from the safe,[22] or liquefy outside the usual dates.[8]

While the Catholic Church has always supported the celebrations, it has never formulated an official statement on the phenomenon and maintains a neutral stance about scientific investigations.[8] It does not permit the vials to be opened, for fear that doing so may cause irreparable damage. This makes close analysis impossible. Nevertheless, a spectroscopic analysis performed in 1902 by Sperindeo claimed that the spectrum was consistent with hemoglobin.[23] A later analysis, with similar conclusions, was carried out by a team in 1989.[26] However, the reliability of these observations has been questioned.[13] While clotted blood can be liquefied by mechanical stirring, the resulting suspension cannot solidify again.[13]

Measurements made in 1900 and 1904 claimed that the ampoules' weight increased by up to 28 grams during liquefaction. However, later measurements with a precision balance, performed over five years, failed to detect any variation.[13]

Various suggestions for the content's composition have been advanced, such as a material that is photosensitive, hygroscopic, or has a low melting point.[27][28][29] However, these explanations run into technical difficulties, such as the variability of the phenomenon and its lack of correlation to ambient temperature.[13]

A recent hypothesis by Garlaschelli & al. is that the vial contains a thixotropic gel,[13][30] he[who?] also explained on the Blood Miracle of Riddles of the Dead series on National Geographic Channel.[31] In such a substance viscosity increases if left unstirred and decreases if stirred or moved. Researchers have proposed specifically a suspension of hydrated iron oxide, FeO(OH), which reproduces the color and behavior of the 'blood' in the ampoule.[32] The suspension can be prepared from simple chemicals that would have been easily available locally since antiquity.[33][34]

In 2010, Giuseppe Geraci, a professor in the Department of Molecular Biology at Naples's Frederick II University, conducted an experiment on a vial containing of old blood—a relic dating back to the 18th century from the Eremo di Camaldoli near Arezzo in Tuscany—having the same characteristics of the blood of St. Januarius.[35] Prof. Geraci showed that the Camaldoli relic also contains blood that can change its solid-liquid phase by shaking.[36] He further reproduced the phenomenon with his own blood stored in the same conditions as the Camaldoli relic,[37] arguing in the end that "there's blood, no miracle".[36]

Although Naples became known as "City of Blood" (urbs sanguinum),[citation needed] legends of blood liquefaction are not a unique phenomenon. Other examples include vials of the blood of Saint Patricia,[where?] of St John the Baptist in the monastery of San Gregorio Armeno, and of Saint Pantaleon in Ravello. In all, the church has recognized claims of miraculous liquefying blood for seven[38] or about twenty[39] saints from Campania and virtually nowhere else.[40] The blood cults of the other saints have been discontinued since the 16th century, which Randi takes as evidence that local artisans or alchemists had a secret recipe for manufacturing this type of relic.[38] A team of three Italian chemists[who?] managed to create a liquid that reproduces all the characteristics and behavior of the liquid in the vial, using only local materials and techniques that were known to medieval workers.[38][41][42] Lancaster leaves open the possibility that the practice was a Christian survival of a pagan ritual intended to protect the locals from unexpected eruptions from Vesuvius.[40]

Museum of the Treasure of St. Januarius

Main article: Museum of the Treasure of St Januarius

Written in Genoa in the month of January 1882, Book Four of The Gay Science by Friedrich Nietzsche opens with a poem entitled 'Sanctus Januarius', meaning both Holy January and Saint Januarius. The dedication can be read in various ways, both as a reference to the symbolic importance of the saint as well as the particular month of January in Nietzsche's biography. Walter Kaufmann's footnote to the English translation of the passage underscores that the use of Sanctus Januarius is as a symbol for Nietzsche's restored intellectual and literary output after years of wandering across Europe. Thus, 'Sanctus Januarius' honors the miracular transformation of deadened life into liquid blood again, which is the leitmotif of the contents of the fourth book of the Gay Science that values becoming a 'Yes-sayer' to everything one is fated to.