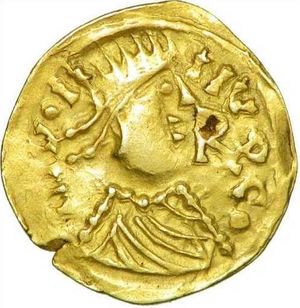 A gold coin minted by Judicael in the 630s.

Saint Judicael or Judicaël (c. 590 – 16 or 17 December 658), also spelled Judhael and by many other variants,[1] was the king of Domnonée and high king of the Bretons in the mid-7th century.

According to Gregory of Tours, the Bretons were divided into various regna (minor kingdoms) during the sixth century, of which Domnonia, Cornouaille, and Gwened are the best known. Having initially pledged themselves to Childebert in exchange for legitimacy and later acknowledged the suzerainty of Clovis I, they had attempted to throw off Frankish rule during the time of Chilperic I, who subdued Waroch II and at least the eastern realms of the region. Guntram, Chilperic's brother, retained his lordship over Waroch and the Brittani formed a Frankish tributary-vassal state through the reign of Dagobert I.[2] 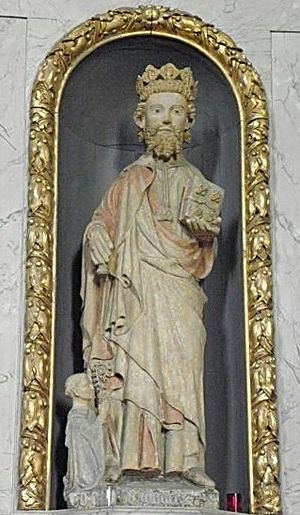 A medieval statue of St Judicael at Paimpont.

In the Chronicle of Fredegar, a Judicael son of Hoel III (580-612) is named as King of the Bretons at this time. It is highly likely that he was the Domnonian King Judicael of Breton tradition. This would indicate that Domnonia had at the time swallowed up Broweroch and Judicael had become a High King. This is probably the reason for his dealings with Dagobert and Eligius. In 635, Dagobert ordered Judicael to come to his palace at Clichy and renew fealty to the king, threatening to invade Brittany otherwise. The Breton king complied and arrived with gifts, but apparently insulted Dagobert by refusing to eat at the royal table.[3]

Around 640, he retired to the monastery of Saint John at Gwazel, not far from the monastery of Paimpont which he had founded. After his death, he was buried beside his abbot, Saint Méen, and declared a saint; his feast day is 16 December. He was succeeded by his son Alain II, known as Alan Hir (the tall). He is also said to have been the father of Saints Judoc and Winnoc.