The Saint Lawrence River (French: Fleuve Saint-Laurent; Tuscarora: Kahnawáʼkyecode: tus is deprecated ;[1] Mohawk: Kaniatarowanennehcode: moh is deprecated , meaning "big waterway") is a large river in the middle latitudes of North America. The Saint Lawrence River flows in a roughly north-easterly direction, connecting the Great Lakes with the Atlantic Ocean and forming the primary drainage outflow of the Great Lakes Basin. It traverses the Canadian provinces of Quebec and Ontario, and is part of the international boundary between Ontario, Canada, and the U.S. state of New York. This river provides the basis for the commercial Saint Lawrence Seaway. 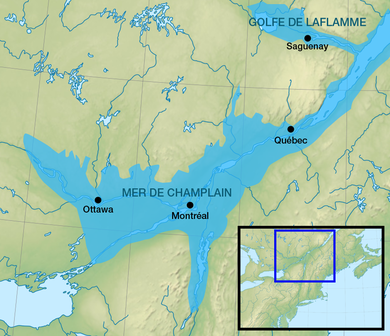 With the draining of the Champlain Sea, due to a rebounding continent from the Last Glacial Maximum, the Saint Lawrence River was formed. The Champlain Sea lasted from about 13,000 years ago to about 10,000 years ago and was continuously shrinking during that time, a process that continues today.[2][3]

Today, the Saint Lawrence River begins at the outflow of Lake Ontario and flows adjacent to Gananoque, Brockville, Morristown, Ogdensburg, Massena, Cornwall, Montreal, Trois-Rivières, and Quebec City before draining into the Gulf of Saint Lawrence, the largest estuary in the world.[4] The estuary begins at the eastern tip of Île d'Orléans, just downstream from Quebec City.[5] The river becomes tidal around Quebec City.[6]

The Saint Lawrence River includes Lake Saint-Louis south of Montreal, Lake Saint Francis at Salaberry-de-Valleyfield and Lac Saint-Pierre east of Montreal. It encompasses four archipelagoes: the Thousand Islands chain near Alexandria Bay, New York and Kingston, Ontario; the Hochelaga Archipelago, including the Island of Montreal and Île Jésus (Laval); the Lake St. Pierre Archipelago (classified biosphere world reserve by the UNESCO in 2000)[7] and the smaller Mingan Archipelago. Other islands include Île d'Orléans near Quebec City and Anticosti Island north of the Gaspé. It is the second longest river in Canada.

The Saint Lawrence River is in a seismically active zone where fault reactivation is believed to occur along late Proterozoic to early Paleozoic normal faults related to the opening of the Iapetus Ocean. The faults in the area are rift-related and comprise the Saint Lawrence rift system. 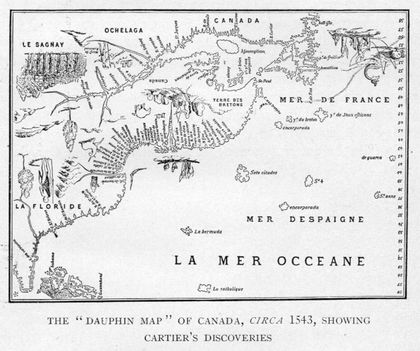 Basque settlements and sites dating from the 16th and 17th centuries

The earliest regular Europeans in the area were the Basques, who came to the St Lawrence Gulf and River in pursuit of whales from the early 16th century. The Basque whalers and fishermen traded with indigenous Americans and set up settlements, leaving vestiges all over the coast of eastern Canada and deep into the Saint Lawrence River. Basque commercial and fishing activity reached its peak before the Armada Invencible's disaster (1588), when the Spanish Basque whaling fleet was confiscated by King Philip II of Spain and largely destroyed. Initially, the whaling galleons from Labourd were not affected by the Spanish defeat.

Until the early 17th century, the French used the name Rivière du Canada to designate the Saint Lawrence upstream to Montreal and the Ottawa River after Montreal. The Saint Lawrence River served as the main route for European exploration of the North American interior, first pioneered by French explorer Samuel de Champlain.

Control of the river was crucial to British strategy to capture New France in the Seven Years' War. Having captured Louisbourg in 1758, the British sailed up to Quebec the following year thanks to charts drawn up by James Cook. British troops were ferried via the Saint Lawrence to attack the city from the west, which they successfully did at the Battle of the Plains of Abraham. The river was used again by the British to defeat the French siege of Quebec under the Chevalier de Lévis in 1760.

In 1809, the first steamboat to ply its trade on the St. Lawrence was built and operated by John Molson and associates, a scant two years after Fulton's steam-powered navigation of the Hudson River. The Accommodation with ten passengers made her maiden voyage from Montreal to Quebec City in 66 hours, for 30 of which she was at anchor. She had a keel of 75 feet, and length overall of 85 feet. The cost of a ticket as eight dollars upstream, and nine dollars down. She had berths that year for twenty passengers.[12]

Within a decade, daily service was available in the hotly-contested Montreal-Quebec route.[13]

Because of the virtually impassable Lachine Rapids, the Saint Lawrence was once continuously navigable only as far as Montreal. Opened in 1825, the Lachine Canal was the first to allow ships to pass the rapids. An extensive system of canals and locks, known as the Saint Lawrence Seaway, was officially opened on 26 June 1959 by Elizabeth II (representing Canada) and President Dwight D. Eisenhower (representing the United States). The Seaway (including the Welland Canal) now permits ocean-going vessels to pass all the way to Lake Superior.

During the Second World War, the Battle of the St. Lawrence involved submarine and anti-submarine actions throughout the lower Saint Lawrence River and the entire Gulf of Saint Lawrence, Strait of Belle Isle and Cabot Strait from May to October 1942, September 1943, and again in October and November 1944. During this time, German U-boats sank several merchant marine ships and three Canadian warships.

In the late 1970s, the river was the subject of a successful ecological campaign (called "Save the River"), originally responding to planned development by the United States Army Corps of Engineers. The campaign was organized, among others, by Abbie Hoffman.[14]

The source of the North River in the Mesabi Range in Minnesota (Seven Beaver Lake) is considered to be the source of the Saint Lawrence River. Because it crosses so many lakes, the water system frequently changes its name. From source to mouth, the names are:

The Saint Lawrence River is at the heart of many Quebec novels (Anne Hébert's Kamouraska, Réjean Ducharme's L'avalée des avalés), poems (in works of Pierre Morency, Bernard Pozier), and songs (Leonard Cohen's "Suzanne", Michel Rivard's "L'oubli", Joe Dassin's "Dans les yeux d'Émilie"), and André Gagnon's "Le Saint-Laurent"). The river was the setting for the Canadian television drama series Seaway. The river has also been portrayed in paintings, notably by the Group of Seven. In addition, the river is the namesake of Saint-Laurent Herald at the Canadian Heraldic Authority.

In 1980 Jacques Cousteau traveled to Canada to make two films on the Saint Lawrence River and the Great Lakes, Cries from the Deep and St. Lawrence: Stairway to the Sea.[23]

The novel and film Black Robe are set primarily on the St. Lawrence River during the 17th century.