From Infogalactic: the planetary knowledge core
Jump to: navigation, search
This article is about the Christian saint. For other uses, see Saint Lucia (disambiguation).

Lucia of Syracuse (283–304), also known as Saint Lucy, or Saint Lucia (Italian: Santa Lucia), was a young Christian martyr who died during the Diocletianic Persecution. She is venerated as a saint by the Roman Catholic, Anglican, Lutheran, and Orthodox Churches. She is one of eight women, who along with the Blessed Virgin Mary, are commemorated by name in the Canon of the Mass. Her feast day, known as Saint Lucy's Day, is celebrated in the West on 13 December. St. Lucia of Syracuse was honored in the Middle Ages and remained a well-known saint in early modern England.[3]

All that is really known for certain of Lucy is that she was a martyr in Syracuse during the Diocletianic Persecution of 304 AD. Her veneration spread to Rome, and by the 6th century to the whole Church. The oldest archaeological evidence comes from the Greek inscriptions from the catacombs of St. John in Syracuse.

The oldest record of her story comes from the fifth-century Acts. Jacobus de Voragine's Legenda Aurea was the most widely read version of the Lucy legend in the Middle Ages. In medieval accounts, Saint Lucy's eyes are gouged out prior to her execution.

All the details of her life are the conventional ones associated with female martyrs of the early 4th century. John Henry Blunt views her story as a Christian romance similar to the Acts of other virgin martyrs.[4]

According to the traditional story, Lucy was born of rich and noble parents about the year 283. Her father was of Roman origin, but died when she was five years old,[5] leaving Lucy and her mother without a protective guardian. Her mother's name Eutychia, seems to indicate that she came of Greek stock.

Like many of the early martyrs, Lucy had consecrated her virginity to God, and she hoped to distribute her dowry to the poor. However, Eutychia, not knowing of Lucy's promise and suffering from a bleeding disorder feared for Lucy's future. She arranged Lucy's marriage to a young man of a wealthy pagan family. 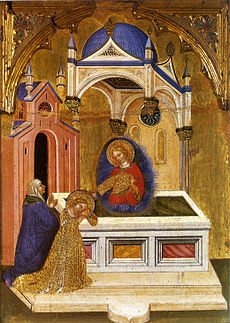 Eutychia and Lucy at the Tomb of Saint Agatha, by Jacobello del Fiore

Saint Agatha had been martyred fifty-two years before during the Decian persecution. Her shrine at Catania, less than fifty miles from Syracuse attracted a number of pilgrims; many miracles were reported to have happened through her intercession. Eutychia was persuaded to make a pilgrimage to Catania, in hopes of a cure. While there, St. Agatha came to Lucy in a dream and told her that because of her faith her mother would be cured and that Lucy would be the glory of Syracuse, as she was of Catania. With her mother cured, Lucy took the opportunity to persuade her mother to allow her to distribute a great part of her riches among the poor.[1]

Euthychia suggested that the sums would make a good bequest, but Lucy countered, "...whatever you give away at death for the Lord's sake you give because you cannot take it with you. Give now to the true Savior, while you are healthy, whatever you intended to give away at your death."[6]

News that the patrimony and jewels were being distributed came to Lucy's betrothed, who denounced her to Paschasius, the Governor of Syracuse. Paschasius ordered her to burn a sacrifice to the emperor's image. When she refused Paschasius sentenced her to be defiled in a brothel. The Christian tradition states that when the guards came to take her away, they could not move her even when they hitched her to a team of oxen. Bundles of wood were then heaped about her and set on fire, but would not burn. Finally, she met her death by the sword. 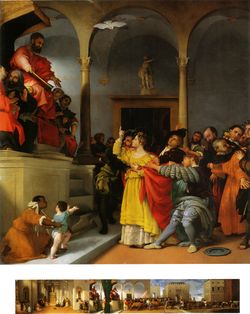 Absent in the early narratives and traditions, at least until the 15th century, is the story of Lucia tortured by eye-gouging. According to later accounts, before she died she foretold the punishment of Paschasius and the speedy end of the persecution, adding that Diocletian would reign no more, and Maximian would meet his end.[1] This so angered Paschasius that he ordered the guards to remove her eyes. Another version has Lucy taking her own eyes out in order to discourage a persistent suitor who admired them. When her body was prepared for burial in the family mausoleum it was discovered that her eyes had been miraculously restored.[5] 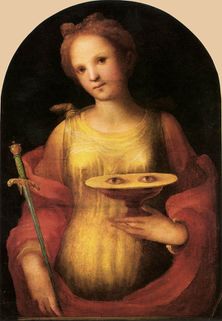 By the 6th century, her story was sufficiently widespread that she appears in the Sacramentary of Pope Gregory I.[4] She is also commemorated in the ancient Roman Martyrology. St. Aldhelm (English, died in 709) and later the Venerable Bede (English, died in 735) attest that her popularity had already spread to England, where her festival was kept in England until the Protestant Reformation, as a holy day of the second rank, in which no work but tillage or the like was allowed.[5]

Sigebert of Gembloux wrote a mid-eleventh century passio, to support a local cult of Lucy at Metz.[7]

The General Roman Calendar formerly had a commemoration of Saints Lucy and Geminianus on 16th of September. This was removed in 1969, as a duplication of the feast of her dies natalis on 13 December and because the Geminianus in question, mentioned in the Passio of Saint Lucy, seems to be a fictitious figure,[2] unrelated to the Geminianus whose feast is on 31 January.

Sigebert (1030–1112), a monk of Gembloux, in his sermo de Sancta Lucia, chronicled that her body lay undisturbed in Sicily for 400 years, before Faroald II, Duke of Spoleto, captured the island and transferred the body to Corfinium in the Abruzzo, Italy. From there it was removed by the Emperor Otho I in 972 to Metz and deposited in the church of St. Vincent. It was from this shrine that an arm of the saint was taken to the monastery of Luitburg in the Diocese of Speyer – an incident celebrated by Sigebert in verse.[1]

The subsequent history of the relics is not clear. According to Umberto Benigni, Stephen II (768) sent the relics of St. Lucy to Constantinople for safety against the Saracen incursions.[8] On their capture of Constantinople in 1204, the French found some relics attributed to Saint Lucy in the city, and Enrico Dandolo, Doge of Venice, secured them for the monastery of St. George at Venice. In 1513 the Venetians presented to Louis XII of France the saint's head, which he deposited in the cathedral church of Bourges. Another account, however, states that the head was brought to Bourges from Rome, where it had been transferred during the time when the relics rested in Corfinium.[9]

The remainder of the relics remain in Venice: they were transferred to the church of San Geremia when the church of Santa Lucia was demolished in 1861 to make way for the new railway terminus. A century later, on 7 November 1981, thieves stole all her bones, except her head. Police recovered them five weeks later, on her feast day. Other parts of the corpse have found their way to Rome, Naples, Verona, Lisbon, Milan, as well as Germany, France and Sweden.[9]

Lucy's Latin name Lucia shares a root (luc-) with the Latin word for light, lux. This has played a large part of Saint Lucy being named as the patron saint of the blind and those with eye-trouble.[10]

She is also the patroness of Syracuse in Sicily, Italy. At the Piazza Duomo in Syracuse, the church of Santa Lucia alla Badia houses the painting "Burial of St. Lucy (Caravaggio)".

Saint Lucy is also the patron saint of the Caribbean island of Saint Lucia, one of the Windward Islands in the Lesser Antilles,[citation needed] and of the US state of Nebraska.[citation needed] 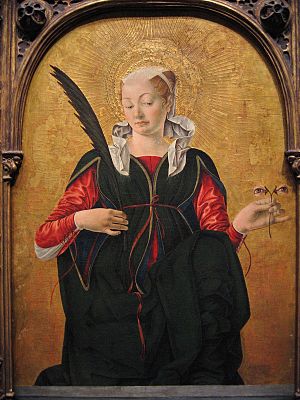 The emblem of eyes on a cup or plate apparently reflects popular devotion to her as protector of sight, because of her name, Lucia (from the Latin word "lux" which means "light").[11][12] In paintings St. Lucy is frequently shown holding her eyes on a golden plate. Lucy was represented in Gothic art holding a dish with two eyes on it. She also holds the palm branch, symbol of victory over evil.[5]

Dante also mentions Lucia in Inferno Canto II as the messenger "of all cruelty the foe" sent to Beatrice from "The blessed Dame" (Divine Mercy), to rouse Beatrice to send Virgil to Dante's aid. She has instructed Virgil to guide Dante through Hell and Purgatory. Lucia is only referred to indirectly in Virgil's discourse within the narrative and does not appear. According to Robert Harrison, Professor in Italian Literature at Stanford University, and Rachel Jacoff, Professor of Italian Studies at Wellesley, Lucia's appearance in this intermediary role is to reinforce the scene in which Virgil tries to fortify Dante's courage to begin the journey through the Inferno.[10]

In the Purgatorio IX:52–63, Lucy carries the sleeping Dante to the entrance to Purgatory. Then in Paradiso XXXII Dante places her opposite Adam within the Mystic Rose in Canto XXXII of the Paradiso. Lucy may also be seen as a figure of Illuminating Grace or Mercy or even Justice.[13]

Lucia is also the protagonist of a Swedish novel: "Ett ljus i mörkret" ("A light in the darkness") by Agneta Sjödin.

Her feast day was commonly described as the shortest day of the year, as it is in John Donne's poem, "A Nocturnal upon St. Lucie's Day, being the shortest day" (1627). The poem begins with: "'Tis the year's midnight, and it is the day's".[10] 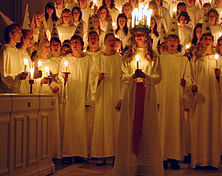 Lucy's feast is on 13 December, in Advent. Her feast once coincided with the Winter Solstice, the shortest day of the year, before calendar reforms, so her feastday has become a festival of light.[5]

This is particularly seen in Scandinavian countries, with their long dark winters. There, a young girl dressed in a white dress and a red sash (as the symbol of martyrdom) carries palms and wears a crown or wreath of candles on her head. In both Norway and Sweden, girls dressed as Lucy carry rolls and cookies in procession as songs are sung. It is said that to vividly celebrate St. Lucy's Day will help one live the long winter days with enough light.

A special devotion to St. Lucy is practiced in the Italian regions of Lombardy, Emilia-Romagna, Veneto, Friuli Venezia Giulia, Trentino-Alto Adige, in the North of the country, and Sicily and Calabria, in the South, as well as in Croatian coastal region of Dalmatia. The feast is a Catholic-celebrated holiday with roots that can be traced to Sicily. On 13th of every December it is celebrated with large traditional feasts of home made pasta and various other Italian dishes, with a special dessert of wheat in hot chocolate milk. The large grains of soft wheat are representative of her eyes and are a treat only to be indulged in once a year.

In Omaha, Nebraska, the Santa Lucia Festival is celebrated each summer. Founded in 1925 by the Italian immigrant Grazia Buonafede Caniglia, it continues to this day. Members of the ethnic Italian community process with a statue of Saint Lucy through the streets of downtown Omaha, carrying also a first-class relic of Saint Lucy.

A Hungarian custom is to plant wheat in a small pot on St. Lucy's feast. By Christmas green sprouts appear, signs of life coming from death. The wheat is then carried to the manger scene as the symbol of Christ in the Eucharist.

In the Philippines, villagers from Barangay Sta. Lucia in Magarao, Camarines Sur, hold a novena to St. Lucy nine days before her feast. A procession of the saint's image is held every morning at the poblacion or village centre during the nine days leading up to St. Lucy's Day, attracting devotees from other parts of the Bicol Region. Hymns to the saint, known as the Gozos, as well as the Spanish version of the Ave Maria are chanted during the dawn procession, which is followed by a Mass.