Saint Martin (French: Saint-Martin; Dutch: Sint Maarten) is an island in the northeast Caribbean, approximately 300 km (190 mi) east of Puerto Rico. The 87-square-kilometre (34 sq mi) island is divided roughly 60/40 between France (53 km2, 20 sq mi)[1] and the Kingdom of the Netherlands (34 km2, 13 sq mi);[2] the two parts are roughly equal in population though, with slightly more people living on the Dutch side. It is the smallest inhabited island divided between two nations. The division dates to 1648. The southern Dutch part comprises Sint Maarten and is one of four constituent countries that form the Kingdom of the Netherlands. The northern French part comprises the Collectivité de Saint-Martin (Collectivity of St. Martin) and is an overseas collectivity of France.

Collectively, the two territories are known as "St-Martin / St Maarten". Sometimes SXM, the IATA identifier for Princess Juliana International Airport (the island's main airport), is used to refer to the island. 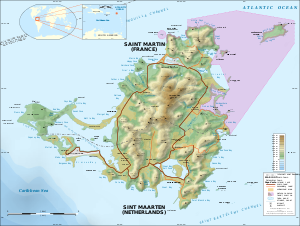 The main cities are Philipsburg (Dutch side) and Marigot (French side). The Dutch side is more heavily populated. The largest settlement on the entire island is Lower Prince's Quarter, on the Dutch side.

The highest hilltop is the Pic Paradis (424 metres (1,391 ft)) in the center of a hill chain on the French side. But both sides are hilly with large mountain peaks. This forms a valley where many houses are located. There are no rivers on the island, but many dry guts. Hiking trails give access to the dry forest covering tops and slopes.

Under the Köppen climate classification, the island has a tropical monsoon climate with a dry season from January to April and a rainy season from August to December.[5] The precipitation patterns are due to the movement of the Azores high during the year.[5] With the wind direction predominantly from the east or the northeast, temperatures remain stable throughout the year and temperatures rarely exceed 34 °C (93 °F) or fall below 20 °C (68 °F).[5] Temperatures remain steady throughout the year with an average mean temperature of 27.2 °C (81.0 °F). The average sea temperature is 27.2 °C (81.0 °F) ranging from a low of 25.9 °C (78.6 °F) in February to a high of 28.4 °C (83.1 °F) in October.[6] The total average yearly rainfall is 1,047 mm (41.2 in), with 142 days of measurable rainfall.[6] Thunderstorms can occasionally occur, with 18 days with thunder per year.[6] Precipitation totals are quite variable from year to year, depending on the number of passing tropical storms and hurricanes. 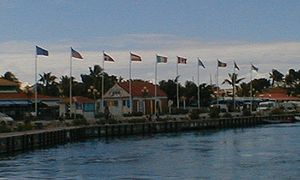 In 1493, Christopher Columbus embarked on his second voyage to the New World. According to legend, Columbus sighted and perhaps anchored at the island of Saint Martin on November 11, 1493, the feast day of Saint Martin of Tours. In his honor, Columbus named the island San Martin.[citation needed] This name was translated to Sint Maarten (Dutch), Saint-Martin (French) and "Saint Martin" in English.

At Columbus's time, St. Martin was populated, if populated at all, by Carib amerindians. The former Arawaks had been chased by the Caribs coming from the North coast of South America a short time before the arrival of the Spaniards who followed in Columbus' wake.[citation needed] The Arawaks were agricultural people who fashioned pottery and whose social organization was headed by hereditary chieftains who derived their power from personal deities called zemis.

The Caribs' territory was not completely conquered until the mid-17th century when most of them perished in the struggle between the French, English, Dutch, Danes and Spanish for control of the West Indies.[citation needed]

The Dutch first began to ply the island's ponds for salt in the 1620s.[citation needed] Despite the Dutch presence on the island, the Spaniards recaptured St. Martin in 1633. One year later, they built a fort (now Ft. Amsterdam) and another artillery battery at Pointe Blanche to assert their claim and control access to Great bay salt pond.[citation needed]

A massive influx of African slaves[citation needed] took place in the 18th century with the development of sugarcane plantations by the French Protestants and Dutch. Slavery was abolished in the first half of the 19th century. On some of their territories the British imported Chinese and East Indians to take the place of slaves. Thus, St. Martin and the other islands are populated by a mixture of Amerindian, European, African, Indian and Asian peoples. 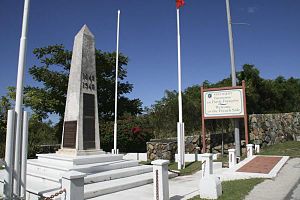 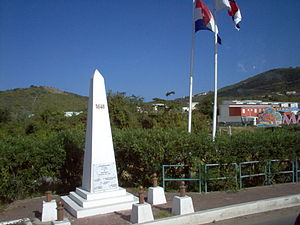 A newer monument, crossing from St. Martin to Sint Maarten, dedicated in 2008

On March 23, 1648, France and the Dutch Republic agreed to divide the island between their two territories, with the signing of the Treaty of Concordia.

Folklore surrounds the history of the once ever-changing border division between St. Martin and Sint Maarten, and a popular story among locals narrates that "to divide the island into two sections, [in 1648] the inhabitants were told to choose two walkers, one chosen by the French-dominated community and the other one by the Dutch-dominated community, who were put back to back in one extreme of the island, making them walk in opposite directions while stuck to the littoral line, and not allowing them to run. The point where they eventually met was set as the other extreme of the island, and the subsequently created line was chosen as the frontier, dividing Saint-Martin from Sint Maarten. Seemingly, the French walker had walked more than his Dutch counterpart (each one earned his land, respectively, 54 km² and 32 km²). As the first man chose wine as his stimulant prior to the race, while the latter chose Jenever (Dutch Gin), the difference between such beverages' lightness was said to be the cause of the territorial differences by French locals, while Dutch locals tended to blame the French walker for running."[18][19]

In 1994, the Kingdom of the Netherlands and France signed the Franco-Dutch treaty on Saint Martin border controls, which allows for joint Franco-Dutch border controls on so-called "risk flights". After some delay, the treaty was ratified in November 2006 in the Netherlands, and subsequently entered into force on 1 August 2007. Though the treaty is now in force, its provisions are not yet implemented as the working group specified in the treaty is not yet installed.[citation needed]

The main industry of the island is tourism. In 2000, the island had about one million visitors annually. About 85% of the workforce was engaged in the tourist industry.[24]

St. Martin's Dutch side is known for its festive nightlife, beaches, jewelry, drinks made with native rum-based guavaberry liquors, and casinos.[26] The island's French side is known for its nude beaches, clothes, shopping (including outdoor markets), and French and Indian Caribbean cuisine. English is the most commonly spoken language along with a local dialect. The official languages are French for Saint-Martin, and both Dutch and English for Sint Maarten. Other common languages include various French-based creoles (spoken by immigrants from other French Caribbean islands), Spanish (spoken by immigrants from the Dominican Republic and various South American countries), and Papiamento (spoken by immigrants from Aruba, Bonaire and Curaçao).

Tourists often use accommodations[27] such as hotels,[28] guesthouses,[29] villas, and timeshares.

Rental cars are the primary mode of transportation for visitors staying on island.[30] Traffic on the island has become a major problem. Long traffic jams between Marigot, Philipsburg and the airport are common.[citation needed] In recent years sargassum weed has arrived on the south ("Dutch") shoreline, but the northern French coast is generally free of the weed.[31]

Because the island is located along the intertropical convergence zone, it is occasionally threatened by tropical storm activity in the late summer and early fall.

Neighbouring islands include Saint Barthélemy (French), Anguilla (British), Saba (Dutch), Sint Eustatius "Statia" (Dutch), Saint Kitts and Nevis (independent, formerly British). With the exception of Nevis, all of these islands are easily visible on a clear day from St. Martin.

Shopping on St Maarten and Saint Martin offers duty-free goods in numerous boutiques. Popular goods include local crafts & arts, exotic foods, jewelry, liquor, tobacco, leather goods, as well as most designer goods. Most often the designer goods are offered at significant discounts, often up to 40% lower than US retail prices. 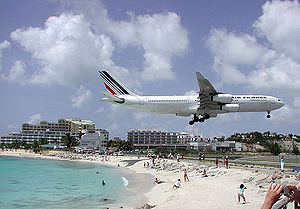 Neither side of the island is part of the Schengen Area; full border checks are performed when travelling between the island and Europe. Passport controls are also exercised when taking the ferry from Marigot to Anguilla. There are rarely checks at the border between the two sides of the island. The Franco-Dutch treaty on Saint Martin border controls requires a working group that has never been set up, to harmonize external checks at the two main airports. The Dutch side has expressed concern that new and tighter tighter French visa requirements would harm their tourism income.[32] 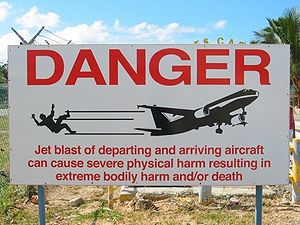 Sign warning people that standing too close to the airport fence on Maho Beach can be dangerous.

The island is served by many major airlines that daily bring in large jet aircraft, including Boeing 747s and Airbus A340s carrying tourists from across the world. The short main runway at Princess Juliana International Airport, and its position between a large hill and a beach, causes some spectacular approaches. Aviation photographers flock to the airport to capture pictures of large jets just a few metres above sunbathers on Maho Beach. [33]

There is a small airport on the French side of the island at Grand Case, L'Espérance Airport for small propeller planes serving neighbouring Caribbean islands. It frequently suffers thick fog during the hurricane season due to its location.