For the coastal town and a municipality in south-western Slovenia, see Piran.

Saint Piran or Pyran (Cornish: Peran, Latin: Piranus[7]), died c. 480,[1][8][9][10] was a 5th-century Cornish abbot and saint, supposedly of Irish origin. He is the patron saint of tin-miners, and is also generally regarded as the patron saint of Cornwall, although Saint Michael and Saint Petroc also have some claim to this title.[note 1][note 2]

Saint Piran's Flag, a white cross on a black background, is used as a symbol of Cornwall. Saint Piran's Day falls on 5 March.

Piran is the most famous of all the saints said to have come to Cornwall from Ireland.[2][3][4][5] By at least the 13th century, since Brittonic languages and Goidelic languages regularly alternate p and k sounds (see the classification of Celtic languages for an explanation), he had become identified as the Irish Saint Ciarán of Saigir who founded the monastery at Seir-Kieran in County Offaly.

The 14th century Life of Saint Piran, probably written at Exeter Cathedral, is a complete copy of an earlier Middle Irish life of Saint Ciarán of Saighir, with different parentage and a different ending that takes into account Piran's works in Cornwall, and especially details of his death and the movements of his Cornish shrine; thus "excising the passages which speak of his burial at Saighir" (Doble). However, there is no shrine to him in Ireland.

5 March is the traditional feast day of both St Ciarán of Saighir and St Piran.[note 5] However the Calendar of Launceston Church records an alternative date of 18 November for the latter.[6] In Perranzabuloe parish Perran Feast is traditionally celebrated on the last Monday in October. On the previous Sunday there are services at the site of St Piran's Oratory and in the parish church of St Piran. 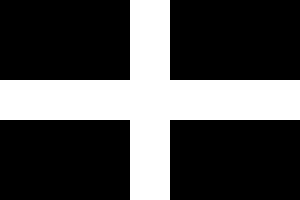 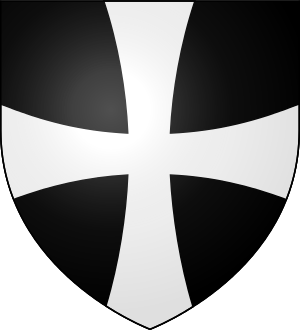 Roll of arms of Saint-Piran's family

It is said that at his death,[note 6] the remains of the Blessed Martin the Abbot which he had brought from Ireland were buried with him at Perranzabuloe.

His own remains were subsequently exhumed and redistributed to be venerated in various reliquaries. Exeter Cathedral was reputed to be the possessor of one of his arms, while according to an inventory, St Piran's Old Church, Perranzabuloe, had a reliquary containing his head and also a hearse in which his body was placed for processionals.

The churches at Perranuthnoe and Perranarworthal were dedicated to Piran and holy wells at Perranwell and Probus, Cornwall are named after him. In Brittany St. Peran, Loperan and Saint-Perran are also named after him.[20]

The earliest documented link to the design of the St Piran's Flag with St Piran is on the coat of arms of the de Saint-Péran or Saint-Pezran (pronounced Peran) family from Cornouaille in Brittany. The earliest evidence known comes from the 15th century, with the arms being De sable à la croix pattée d'argent. (a black shield with a white cross pattée).[21][22]

Mount St. Piran is a mountain in Banff National Park near Lake Louise, Alberta, Canada, named after the saint. 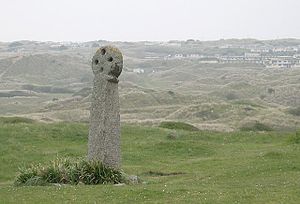 St Piran's Cross in the dunes at Perranzabuloe

St Piran's Day is popular in Cornwall and the term 'Perrantide' has been coined to describe the week prior to this day. Many Cornish-themed events occur in the Duchy and also in areas in which there is a large community descended from Cornish emigrants. The village of Perranporth ('Porthpyran' in Cornish) hosts the annual inter-Celtic festival of 'Lowender Peran', which is also named in honour of him.

The largest St Piran's Day event is the march across the dunes to St Piran's cross which hundreds of people attend, generally dressed in black, white and gold, and carrying the Cornish Flag.[23] A play of the Life of St Piran, in Cornish, has been enacted in recent years at the event. Daffodils are also carried and placed at the cross. Daffodils also feature in celebrations in Truro, most likely due to their 'gold' colour. Black, white and gold are colours associated with Cornwall due to St Piran's Flag (black and white), and the Duchy Shield (gold coins on black).

In 2006 Cornish MP Dan Rogerson asked the government to make 5 March a public holiday in Cornwall to recognise celebrations for St Piran's Day.[24]