From Infogalactic: the planetary knowledge core
Jump to: navigation, search
For Saint Stephen, the first king of Hungary, see Stephen I of Hungary. For other uses, see St. Stephen (disambiguation).

Stephen or Stephan (Greek: Στέφανος, Stephanos; Latin: Stephanus), traditionally venerated as the Protomartyr or first martyr of Christianity,[1] was according to the Acts of the Apostles a deacon in the early church at Jerusalem who aroused the enmity of members of various synagogues by his teachings. Accused of blasphemy, at his trial he made a long speech denouncing the Jewish authorities who were sitting in judgment on him and was then stoned to death. His martyrdom was witnessed by Saul of Tarsus, a Pharisee who would later himself become a follower of Jesus.

The Catholic, Anglican, Lutheran, Oriental Orthodox, Eastern Orthodox Churches, and the Church of the East venerate Stephen as a saint. Stephen's name is derived from the Greek language Stephanos, meaning "crown". Traditionally, Stephen is invested with a crown of martyrdom; artistic representations often depict him with three stones and the martyr's palm frond. Eastern Christian iconography shows him as a young, beardless man with a tonsure, wearing a deacon's vestments, and often holding a miniature church building or a censer. 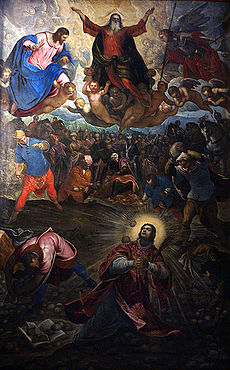 Stephen is first mentioned in Acts of the Apostles as one of seven deacons appointed by the Apostles to distribute food and charitable aid to poorer members of the community in the early church. According to Orthodox belief, he was the eldest and is therefore called "archdeacon".[4] As another deacon, Nicholas of Antioch, is specifically stated to have been a convert to Judaism, it may be assumed that Stephen was born Jewish, but nothing more is known about his previous life.[2] The reason for the appointment of the deacons is stated to have been dissatisfaction among Hellenistic (that is, Greek-influenced and Greek-speaking) Jews that their widows were being slighted in preference to Hebraic ones in distribution of alms from the community funds. Since the name "Stephanos" is Greek, it has been assumed that he was one of these Hellenistic Jews. Stephen is stated to have been full of faith and the Holy Spirit and to have performed miracles among the people.[Acts 6:5,8] It seems to have been among synagogues of Hellenistic Jews that he performed his teachings and "signs and wonders" since it is said that he aroused the opposition of the "Synagogue of the Freedmen", and "of the Cyrenians, and of the Alexandrians, and of them that were of Cilicia and Asia".[Acts 6:9] Members of these synagogues had challenged Stephen's teachings, but Stephen had bested them in debate. Furious at this humiliation, they suborned false testimony that Stephen had preached blasphemy against Moses and God. They dragged him to appear before the Sanhedrin, the supreme legal court of Jewish elders, accusing him of preaching against the Temple and the Mosaic Law.[Acts 6:9–14] Stephen is said to have been unperturbed, his face looking like "that of an angel".[2]

In a long speech to the Sanhedrin comprising almost the whole of Acts Chapter 7, Stephen presents his view of the history of Israel. The God of glory, he says, appeared to Abraham in Mesopotamia, thus establishing at the beginning of the speech one of its major themes, that God does not dwell only in one particular building (meaning the Temple).[5] Stephen recounts the stories of the patriarchs in some depth, and goes into even more detail in the case of Moses. God appeared to Moses in the burning bush[Acts 7:30–32], and inspired Moses to lead his people out of Egypt. Nevertheless, the Israelites turned to other gods.[Acts 7:39–43] This establishes the second main theme of Stephen's speech, Israel's disobedience to God.[5] Stephen faced two accusations: that he had declared that Jesus would destroy the Temple in Jerusalem and that he had changed the customs of Moses. The Roman Catholic Church states that St. Stephen appealed to the Jewish scriptures to prove how the laws of Moses were not subverted by Jesus but, instead, were being fulfilled.[6] He denounces his listeners[5] as "stiff-necked" people who, just as their ancestors had done, resist the Holy Spirit. "Was there ever a prophet your ancestors did not persecute? They even killed those who predicted the coming of the Righteous One. And now you have betrayed and murdered him."[Acts 7:51–53]

The Stoning of Stephen 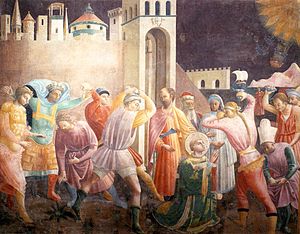 Thus castigated, the account is that the crowd could contain their anger no longer.[7] However Stephen, seemingly now oblivious to them, looked up and cried "Look! I see heaven open and the Son of Man standing on the right hand of God!" To the Sanhedrin, this claim that the recently executed Jesus was standing by the side of God[8][Acts 7:54] was such intense blasphemy that they rushed upon Stephen, drove him outside the city to the place appointed, and stoned him.[4] At this time Jewish law permitted the death penalty by stoning for blasphemy. The witnesses, whose duty it was to throw the first stones,[9][8] laid their coats down so as to be able to do this, at the feet of a "young man named Saul", later to be known as Paul the Apostle. Stephen prayed that the Lord would receive his spirit and his killers be forgiven, sank to his knees, and "fell asleep" [Acts 7:58–60]. Saul "approved of their killing him".[Acts 8:1] 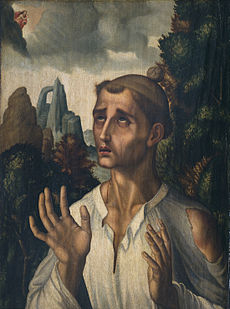 Of the numerous speeches in Acts of the Apostles, Stephen's speech to the Sanhedrin is the longest.[10] To the objection that it seems unlikely that such a long speech could be reproduced in the text of Acts exactly as it was delivered, some Biblical scholars have replied that Stephen's speech shows a distinctive personality behind it.[5]

It has often been observed that there are numerous divergences in Stephen's re-telling of the stories of Israelite history and the scriptures where these stories originated; for instance, Stephen says that Jacob's tomb was in Shechem,[Acts 7:16] but Genesis 50:13[Genesis 50:13] says Jacob's final resting place was a cave in Machpelah at Hebron.[Acts 8:1][5] There are at least five of these discrepancies, which some scholars have seen as errors, others as deliberate, in order to make specific theological points.[10] There are also theologians who suggested that this discrepancy may come from an ancient Jewish tradition which was not included in the scriptures or may have been popular among people of Jerusalem who weren't scribes.[11] Numerous parallels between the accounts of Stephen in Acts and the Jesus of the Gospels – they both perform miracles, they are both tried by the Sanhedrin, they both pray for forgiveness for their killers, for instance – have led to suspicions that the author of Acts has emphasised -in order to show the recipient that people become holy when they follow the example of Christ- or invented some (or all) of these.[8] The criticism of traditional Jewish belief and practice in Stephen's speech is very strong – when he says God does not live in a dwelling "made by human hands", referring to the Temple, he is using an expression often employed by Biblical texts to describe idols.[5] Most scholars agree that by doing this, Stephen pursues the aim of convincing all the people assembled that Jesus Christ is the Lord and therefore everything done against him or his teachings is practically against their own faith.

Some people laid the charge of anti-Judaism against the speech, for instance the priest and scholar of comparative religion S. G. F. Brandon, who states "The anti-Jewish polemic of this speech reflects the attitude of the author of Acts."[12]

Tomb and Relics of Stephen 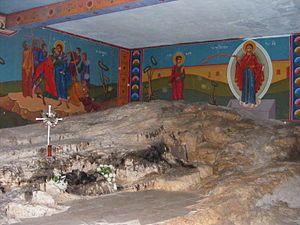 Acts 8:2[Acts 8:2] says "Godly men buried Stephen and mourned deeply for him", but the location where he was buried is not specified.

In 415 AD a priest named Lucian purportedly had a dream that revealed the location of Stephen's remains at Beit Jimal. After that, the relics of the protomartyr were taken in procession to the Church of Hagia Sion on December 26, 415, making it the date for the feast of St. Stephen. In 439, the relics were translated to a new church north of the Damascus Gate built by the empress Aelia Eudocia in honor of St. Stephen. This church was destroyed in the 12th century. A 20th-century French Catholic church, St Etienne, was built in its place, while another, the Greek Orthodox Church of St Stephen was built at the site of his martyrdom.[13]

The relics of the protomartyr were later translated to Rome by Pope Pelagius II during the construction of the basilica of San Lorenzo fuori le Mura. They were interred alongside the relics of St. Lawrence, whose tomb is enshrined within the church. According to the Golden Legend, the relics of Lawrence moved miraculously to one side to make room for those of Stephen.[14]

In his book, The City of God, St. Augustine describes the many miracles that occurred when part of the relics of St. Stephen were brought to Africa.[15]

Part of the right arm of Saint Stephen is enshrined at Trinity Lavra of St. Sergius in Russia.[16]

In Western Christianity, 26 December is called "St. Stephen's Day", the "Feast of Stephen" mentioned in the English Christmas carol "Good King Wenceslas". It is a public holiday in many nations that were historically Catholic, Anglican or Lutheran including Austria, Croatia, the Czech Republic, Ireland, Luxembourg, Slovakia, Poland, Italy, Germany, Norway, Sweden, Denmark and Finland. In Australia, New Zealand, Canada and the United Kingdom, the day is celebrated as "Boxing Day".

In the current norms for the liturgy of the Roman Catholic Church, the feast is celebrated at the Eucharist, but, for the Liturgy of the Hours, is restricted to the Hours during the day, with Evening Prayer being reserved to the celebration of the Octave of Christmas. Historically, the invention of the relics of St. Stephen (i.e. their reputed discovery) was commemorated on 3 August.[17] The feasts of both 26 December and 3 August have been used in dating clauses in historical documents produced in England.[18] 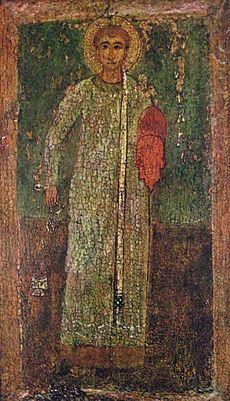 In the Eastern Orthodox Church and those Eastern Catholic Churches which follow the Byzantine Rite, Saint Stephen's feast day is celebrated on December 27. This day is also called the "Third Day of the Nativity". In the Oriental Orthodox Churches (e.g. Coptic, Syrian, Malankara) St. Stephen's Day is observed on January 8.

In the eucharistic celebration on this feast day, it is traditional for all deacons serving at the altar to wear a liturgical crown (Armenian: խոյր khooyr), which is one of the vestments worn only by priests on all other days of the year, the crown being in this instance a symbol of martyrdom. 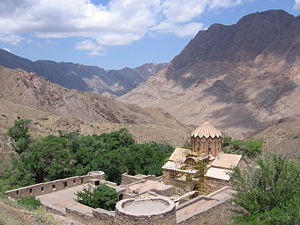 The Saint Stephen Armenian Monastery of the 9th century near Jolfa, Iran

Many churches and other places commemorate Saint Stephen. Among the most notable are: