From Infogalactic: the planetary knowledge core
Jump to: navigation, search
This article is about the saint. For other uses, see Saint Ursula (disambiguation).

Saint Ursula (Latin for 'little female bear') is a Romano-British Christian saint. Her feast day in the pre-1970 General Roman Calendar is October 21. Because of the lack of definite information about the anonymous group of holy virgins who on some uncertain date were killed at Cologne,[1] their commemoration was omitted from the General Roman Calendar when it was revised in 1969, but they have been kept in the Roman Martyrology.

Her legend, probably not historical,[2][3] is that she was a princess who, at the request of her father King Dionotus of Dumnonia in south-west Britain, set sail to join her future husband, the pagan governor Conan Meriadoc of Armorica, along with 11,000 virginal handmaidens. After a miraculous storm brought them over the sea in a single day to a Gaulish port, Ursula declared that before her marriage she would undertake a pan-European pilgrimage. She headed for Rome with her followers and persuaded the Pope, Cyriacus (unknown in the pontifical records, though from late 384 there was a Pope Siricius), and Sulpicius, bishop of Ravenna, to join them. After setting out for Cologne, which was being besieged by Huns, all the virgins were beheaded in a massacre. The Huns' leader shot (with a bow and arrow) Ursula dead, in about 383 (the date varies). 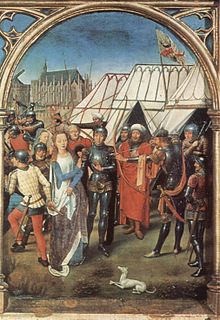 The legend of Ursula is based on a 4th- or 5th-century inscription from the Church of St. Ursula (on the Ursulaplatz) in Cologne. It states that the ancient basilica had been restored on the site where some holy virgins were killed.[4]

The Catholic Encyclopedia states that "this legend, with its countless variants and increasingly fabulous developments, would fill more than a hundred pages. Various characteristics of it were already regarded with suspicion by certain medieval writers, and since Baronius have been universally rejected."[2] Neither Jerome nor Gregory of Tours refers to Ursula in their writings.[5] Gregory of Tours mentions the legend of the Theban Legion, to whom a church that once stood in Cologne was dedicated.[5] The most important hagiographers (Bede, Ado, Usuard, Notker the Stammerer, Hrabanus Maurus) of the early Middle Ages also do not enter Ursula under October 21, her feast day.[5] A legend resembling Ursula's appeared in its full form between 731 and 839, but it does not mention the name of Ursula, but that of Pinnosa or Vinnosa as the leader of the martyred group.[5] 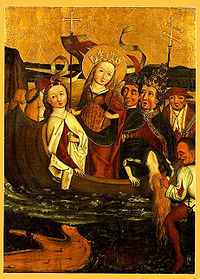 The Basilica of St. Ursula in Cologne contains the alleged relics of Ursula and her 11,000 companions.[7] It contains what has been described as a "veritable tsunami of ribs, shoulder blades, and femurs... arranged in zigzags and swirls and even in the shapes of Latin words."[8] The Goldene Kammer (Golden Chamber), a 17th-century chapel attached to the Basilica of St. Ursula, contains sculptures of their heads and torsos, "some of the heads encased in silver, others covered with stuff of gold and caps of cloth of gold and velvet; loose bones thickly texture the upper walls."[7][8] The peculiarities of the relics themselves have thrown doubt upon the historicity of Ursula and her 11,000 maidens. When skeletons of little children, ranging in age from two months to seven years, were found buried with one of the sacred virgins in 1183, Hermann Joseph, a Praemonstratensian canon at Steinfeld, explained that these children were distant relatives of the eleven thousand.[5] A surgeon of eminence was once banished from Cologne for suggesting that, among the collection of bones which are said to pertain to the heads, there were several belonging to full-grown mastiffs.[7] The relics may have come from a forgotten burial ground.[9] 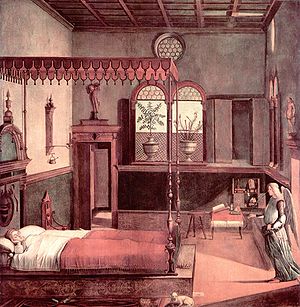 It has also been theorized that Ursula is a Christianized form of the goddess Freya, who welcomed the souls of dead maidens.[5]

Nothing is known about the girls said to have been martyred at the spot. A commemoration of Saint Ursula and her companions in the Mass of Saint Hilarion formerly in the General Roman Calendar on October 21 was removed in 1969, because "their Passio is entirely fabulous: nothing, not even their names, is known about the virgin saints who were killed at Cologne at some uncertain time".[10] However, they are still mentioned in the Roman Martyrology, the official but professedly incomplete list of saints recognized by the Catholic Church, which speaks of them as follows: "At Cologne in Germany, commemoration of virgin saints who ended their life in martyrdom for Christ in the place where afterwards the city's basilica was built, dedicated in honour of the innocent young girl Ursula who is looked on as their leader."[11] 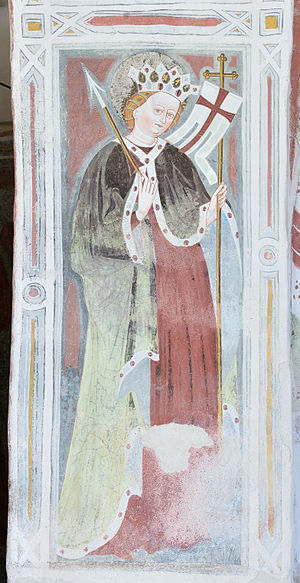 Saint Ursula in a 15th-century fresco on the St. Jacob church in Urtijëi in Val Gardena

The small village of Llangwyryfon, near Aberystwyth in west Wales, has a church dedicated to her. The village name translates as "Church of the virgins". She is believed to have originated from this area.

In the Philippines,in the town of Binangonan, province of Rizal, another church is dedicated in her name. Ursula's feast is still celebrated by the parish every 21st day of October. A fluvial procession on Laguna lake is carried out to commemorate Ursula's travel.

Hildegard of Bingen composed many chants in honour of her. It was recorded that Elizabeth of Schönau experienced a vision that revealed to her the martyrdom of Ursula and her companions.[9]

The street in London called St Mary Axe is named after the Church of St Mary Axe, originally dedicated to St Mary the Virgin, St Ursula and the 11,000 Virgins. It was demolished in the late 16th century; the site is located close to where the skyscraper informally known as The Gherkin now stands. A manuscript dated 1514 claims that the church contained a holy relic: an axe used by the Huns to execute the virgins.[12]

In the 1480s, Hans Memling fashioned a wooden shrine that contained the relics of Ursula, which is now at the Hans Memlingmuseum in Bruges. It told the story of Ursula in six bow-arched panels, with the two front panels showing Ursula accompanied by 10 virgins, each representing 1,000 virgins.[13]

Christopher Columbus named the Virgin Islands in the Caribbean in her honour when sailing past them in 1493.

A tradition in the Swiss city of Basel, about 400 km south of Cologne, holds that Ursula and her companions passed through Basel intending to go to Rome. The legend is commemorated in the name of Eleven Thousand Virgins Alley (Elftausendjungfern-Gässlein), which climbs one side of the Münsterberg, a hill in the centre of the city.

The Order of Ursulines, founded in 1535 by Angela Merici, and especially devoted to the education of young girls, has also helped to spread Ursula's name throughout the world. St. Ursula was named the patron saint of students.

Cordula was, according to a legend in an edition of the Roman Martyrology presented in an English translation on a traditionalist Catholic website,[14] one of Ursula's companions: "Being terrified by the punishments and slaughter of the others, Cordula hid herself, but repenting her deed, on the next day she declared herself to the Huns of her own accord, and thus was the last of them all to receive the crown of martyrdom". In his Albert the Great,[15] Joachim Sighart recounts that, on February 14, 1277, while work was being done at the church of St John the Baptist (Johanniterkirche) in Cologne, Cordula's body was discovered; it was fragrant and on her forehead was written: "Cordula, Queen and Virgin"; when Albert the Great heard of the finding, he sang mass and transferred the relics. Later, Cordula's supposed remains were moved to Königswinter and Rimini.[16] Cordula's head was claimed by the Cathedral of Palencia.[17]