Saint Veronica was a pious woman of Jerusalem in the first century AD, according to Christian tradition.[3] A celebrated saint in many pious Christian countries, the Acta Sanctorum published by the Bollandists gave her Feast (under February 4),[4] but the Jesuit Scholar Joseph Braun cited her commemoration in Festi Marianni on 13 January.

According to Church tradition, Veronica was moved with pity when she saw Jesus carrying his cross to Golgotha and gave him her veil that he might wipe his forehead. Jesus accepted the offering, held it to his face, and then handed it back to her—the image of his face miraculously impressed upon it. This piece of cloth became known as the Veil of Veronica.[5][6][7]

The name "Veronica" itself is a Latinisation of Berenice (Greek: Βερενίκη, Berenikē, with a secondary form Beronike), a Macedonian name, meaning "bearer of victory". The woman who offered her veil to Jesus was known by this name in the Byzantine East, but in the Latin West the name took a life of its own. As proven by a medieval text, "Veronica" was used by the 13th century as a designation for a relic venerated in Rome as the true image of Jesus. Since the Latin word for "true" or "authentic" happens to be vera, the theory emerged that the name itself is derived from the Latin phrase "true image", vera icon (one Latin word for image is icon, derived from Greek: εικόνα, eikona). In the 13th-century text and also in some later sources the term Veronica was used for the veil, not the person, but for centuries it has been better known as the name of the woman. The claim that the name Veronica is derived from vera icon proved to be very persistent and we encounter it until today. The Encyclopædia Britannica says this about the legend:

Eusebius in his Historia Ecclesiastica (vii 18) tells how at Caesarea Philippi lived the woman whom Christ healed of an issue of blood (Matthew 9:20-22). Legend was not long in providing the woman of the Gospel with a name. In the West she was identified with Martha of Bethany; in the East she was called Berenike, or Beronike, the name appearing in as early a work as the "Acta Pilati", the most ancient form of which goes back to the fourth century. The fanciful derivation of the name Veronica from the words Vera Icon (eikon) "true image" dates back to the "Otia Imperialia" (iii 25) of Gervase of Tilbury (fl. 1211), who says: "Est ergo Veronica pictura Domini vera" (translated: "The Veronica is, therefore, a true picture of the Lord.")

The Catholic Encyclopaedia of 1913 had this to say about the growth of the legend (translations in italics added):[8]

The belief in the existence of authentic images of Christ is connected with the old legend of King Abgar of Edessa and the apocryphal writing known as the "Mors Pilati" ("the Death of Pilate"). To distinguish at Rome the oldest and best known of these images it was called the vera icon (true image), which in the common tongue soon became "Veronica." It is thus designated in several medieval texts mentioned by the Bollandists (e.g. an old Missal of Augsburg has a Mass "De S. Veronica seu Vultus Domini" - "Saint Veronica, or the Face of the Lord"), and Matthew of Westminster speaks of the imprint of the image of the Savior which is called Veronica: "Effigies Domenici vultus quae Veronica nuncupatur" - "effigy of the face of the Lord which is called a Veronica". By degrees, popular imagination mistook this word for the name of a person and attached thereto several legends which vary according to the country.

The reference to Abgar is related to a similar legend in the Eastern Church, the Image of Edessa or Mandylion. 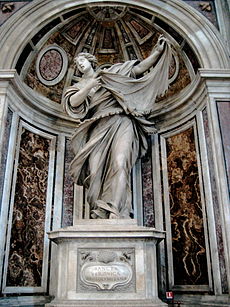 Statue of Saint Veronica by Francesco Mochi in a niche of the pier supporting the main dome of Saint Peter's Basilica.

There is no reference to the story of St Veronica and her veil in the canonical Gospels. She is known as the woman who wiped Jesus's face with her veil. Then the image of Jesus's face appeared on it. The closest is the miracle of the woman who was healed by touching the hem of Jesus’s garment (Luke 8:43–48); her name is later identified as Veronica by the apocryphal "Acts of Pilate". The story was later elaborated in the 11th century by adding that Christ gave her a portrait of himself on a cloth, with which she later cured the Emperor Tiberius. The linking of this with the bearing of the cross in the Passion, and the miraculous appearance of the image only occurs around 1380, in the internationally popular book Meditations on the life of Christ.[9] The story of Veronica is celebrated in the sixth Station of the Cross in many Anglican, Catholic, Lutheran, Methodist and Western Orthodox churches.[3][10][11] 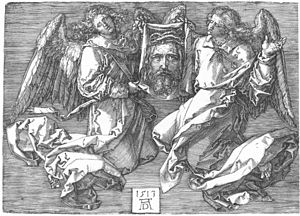 According to the Catholic Encyclopedia, the name "Veronica" comes from the Latin vera, meaning "true" or "Truthful", and the Greek eikon, meaning "image"; the Veil of Veronica was therefore largely regarded in medieval times as the "true image", the truthful representation of Jesus, preceding the Shroud of Turin.[8]

Saint Veronica was mentioned in the reported visions of Jesus by Sister Marie of St Peter, a Carmelite nun who lived in Tours, France, and started the devotion to the Holy Face of Jesus. In 1844, Sister Marie reported that in a vision, she saw Saint Veronica wiping away the spit and mud from the face of Jesus with her veil on the way to Calvary. She said that sacrilegious and blasphemous acts today are adding to the spit and mud that Saint Veronica wiped away that day. According to Sr Marie of St Peter, in her visions Jesus told her that he desired devotion to His Holy Face in reparation for sacrilege and blasphemy. Acts of Reparation to Jesus Christ are thus compared to Saint Veronica wiping the face of Jesus.[12][13]

The Devotion to the Holy Face of Jesus was eventually approved by Pope Leo XIII in 1885. St Veronica is commemorated on 12 July.

File:Veronicazejtun.jpg
Statue of Veronica, used during the Good Friday procession in Zejtun, Malta.

Mel Gibson's film The Passion of the Christ (2004) included an episode of Veronica wiping Jesus's face, although she is not referred to by name in the film (she is credited in the film as "Seraphia"). Blessed Anne Catherine Emmerich, one of the inspirational sources to the cited movie, depicts a long and touching description of the St Veronica episode and she identifies the true name of St Veronica also as "Seraphia."[14]

The most common pass with the cape in bullfighting is called a "verónica", as the torero holds the cape in the same way as St.Veronica is usually depicted holding the cloth.

Churches and parishes named in her honor