Saint Vincent College is a four-year, coeducational, Roman Catholic, Benedictine, liberal arts college located about 40 miles southeast of Pittsburgh in Latrobe, Pennsylvania, USA. It was founded in 1846 by Boniface Wimmer, a monk from Bavaria, Germany. It was the first Benedictine monastery in the United States. It is operated by the Benedictine monks of Saint Vincent Archabbey.

Saint Vincent Archabbey and College was founded in 1846 by Boniface Wimmer, a monk from Metten Abbey in Bavaria. On April 18, 1870, the Pennsylvania state legislature incorporated the school. Saint Vincent College became coeducational in 1983. In 1996, the college, along with the archabbey, seminary, and parish, observed the 150th anniversary of its founding.

Saint Vincent College is an educational community rooted in the tradition of the Catholic faith, the heritage of the Benedictine monasticism, and the love of values inherent in the liberal approach to life and learning, Its mission is to provide quality undergraduate and graduate education for men and women to enable them to integrate their professional aims with the broader purposes of human life. The programs, activities, and encounters that make up student life at Saint Vincent College encourage the intellectual gifts, professional aptitudes and personal aspirations of students to mature harmoniously.[3] 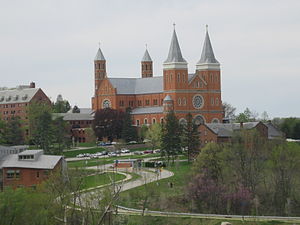 The entrance to the school. From here you can see the Basilica as well as some of the academic buildings.

Saint Vincent is organized into four schools; each includes a number of departments and major and minor programs offering undergraduate or graduate degrees, as well as special programs and public service outreach activities. Each school has its own Dean who works closely with students, faculty and prospective students and a Council of Advisors composed of representatives of business, industry, and academia to advise and direct policy and programs.[4]

The four schools are:

This school was formed in 2001. As of 2015[update] the dean was Gary Quinlivan, B.A., Ph.D. It includes the departments and programs of Accounting, Economics, Business Education, Finance, International Business, Management, Marketing, Politics, and Public Policy.

The school was formed in 2004, and as of 2015[update] the dean was Mary Beth Spore, B.A., M.A., Ph.D. It includes the departments of Communication, Education, Psychology, and Sociology/Anthropology. The departments share in common a concern with how people develop and interact in a wide range of settings as well as a commitment to the approaches common to the social sciences. Programs in the school share a commitment to active and experiential learning and to student research. Associated with the school are the Saint Vincent College Drug and Alcohol Prevention Projects and the Fred M. Rogers Center for Early Learning and Children's Media.

School of Humanities and Fine Arts

The school was formed in 2004, and the dean as of 2015[update] was Fr. Rene Kollar, O.S.B., B.A. M.Div., M.A., Ph.D., F.R. Hist. S. It contains the departments and programs of English, Fine Arts (Art and Music), History, Liberal Arts, Modern and Classical Languages, Philosophy, and Theology. The Saint Vincent Gallery and the College's Stage and Theatre programs are also part of the School.

The school was formed in 2004, and as of 2015[update] the dean was Dr. Stephen M. Jodis. It includes the departments of Biology, Chemistry, Computing and Information Science, Mathematics, and Physics. Majors are also offered in Biochemistry, Bioinformatics, and Environmental Science. Teacher certification may be obtained in biology, chemistry, environmental education, mathematics and physics. Cooperative programs with other institutions of higher education enable students to pursue degrees in engineering, occupational therapy, pharmacy, physical therapy and physician assistant.

The college offers a five-year cooperative liberal arts and engineering program. Students spend three years at St. Vincent, fulfilling core requirements and prerequisites for an engineering major, then two years at the engineering college. Upon completion of coursework and recommendation by the Mathematics Department, students are guaranteed acceptance at Penn State University. The college also has agreements with the University of Pittsburgh and The Catholic University of America. Under this program, the student receives a Bachelor of Arts degree from St. Vincent and a Bachelor of Science degree from the engineering college. In 2014, the college added a four-year degree in engineering science.

St. Vincent has intercollegiate teams in football, baseball, softball, women's volleyball, basketball, cross country, golf, lacrosse, soccer, swimming, track and tennis. The college is a member of the National Collegiate Athletic Association (NCAA). They compete in the Presidents' Athletic Conference, at the Division III level. The school also offers men's ice hockey and men's and women's rugby as a club sport. One Saint Vincent basketball player, Daniel Santiago, has played in the NBA.

The men's teams are known as the Bearcats and the women's as the Lady Bearcats. The athletic colors are green and gold.

Since 1966, the college has served as the training camp host of the Pittsburgh Steelers. Rooney Hall, completed in 1995, is a residence hall which is used by the Steelers during their stay on campus each summer. It is named in honor of the Steelers' founder, Arthur J. Rooney Sr.. The Steelers regularly attract tens of thousands of fans to training camp and the Rooney family in conjunction with the College administration have vowed to keep with tradition and always have the camp open and free to the public.

The site of camp, Chuck Noll Field, is one of the most storied in the NFL and NCAA with Peter King of SI.com describing it as: ". . . I love the place. It's the perfect training-camp setting, looking out over the rolling hills of the Laurel Highlands in west-central Pennsylvania, an hour east of Pittsburgh. On a misty or foggy morning, standing atop the hill at the college, you feel like you're in Scotland. Classic, wonderful slice of Americana. If you can visit one training camp, this is the one to see."[6]

The main athletic center is the Robert S. Carey Student Center. It was formerly known as Sportsman's Hall, after the original name of St. Vincent Parish, and Kennedy Hall, after President John F. Kennedy, who received an honorary degree of law on February 4, 1958. It contains the gymnasium, swimming pool, student union and fitness center.

In 2011, the Lady Bearcat basketball team,[7] led by All-American Brittany Sedlock, became the first team in school history to qualify for the NCAA Division-III postseason since the school made the move from the NAIA. Ranked among the top-20 nationally throughout the season,[8] the Lady Bearcats were defeated in their opening-round National Tournament game by Greensboro College.[9] The women's basketball team overcame a major tragedy during the 2010-11 season, with the Christmas Day 2010 death of Kristen Zawacki (1958-2010), the lone women's basketball coach in the program's 25-year history.[10] Zawacki, also the school's Associate Athletic Director, won over 500 games in her career.[11] She was succeeded by assistant coach Jimmy Petruska, who was named interim coach immediately following her death, before being officially named the team's head coach on April 27, 2011.

Housing on campus is available in six residence halls for approximately 1,280 students. First year students under the age of 21 and living more than 50 miles from Saint Vincent College are required to reside on campus.

Saint Benedict Hall serves as the center for the first-year student population. Upperclassmen are housed in Bonaventure Hall, Gerard Hall, Wimmer Hall, Rooney Hall and Aurelius Hall. Housing in most residence halls is single sex by floor. Aurelius is the oldest dorm, built in 1923. Wimmer Hall was built in 1952. Gerard and Bonaventure, better known as "Gerry" and "Bonny" to students, were built in 1963. Gerard and Bonaventure will be renovated over summers 2014/2015, respectively. Rooney Hall and Saint Benedict Hall opened at the beginning of the twenty-first century.

Brother Norman was inaugurated as the 17th President of Saint Vincent College on October 11, 2010.[12]

Since 1967 commencement speakers at Saint Vincent College include:

During Jim Towey's four-year tenure as President, he stressed a more traditional Catholic identity and St. Vincent College was included in the list of the top ten conservative colleges in the United States for the first time. Towey attracted two high-profile commencement speakers: US President George W. Bush in 2007 and Mike Tomlin, coach of the Pittsburgh Steelers in 2008.[17] During this same time Towey encountered opposition from some of the faculty.[18] While Towey attributed much of the dissension to his lack of experience in academia and to faculty unaccustomed to rapid change, three-quarters of the school's tenured faculty signed a letter stating that several decisions made by Towey had caused a major crisis at the college.[17][19][20] More than two years later Towey left Saint Vincent College; he was named president of the conservative Ave Maria University in July 2011.

In November 2009 reports emerged that Mark Gruber, at the time a Benedictine priest and faculty member who opposed Towey's reforms, was accused by the college administration of sexual misconduct. An attorney for the college stated that Gruber admitted under oath that he created pornographic materials on a college computer, including "grossly inappropriate depictions of himself", and that when Gruber was confronted with pornographic photographs during the deposition he admitted creating and e-mailing the images.[21] On July 2, 2012, Catholic Church officials issued a final decision in the matter confirming that "Gruber has been found guilty of the delicts (canonical crimes) of possession of child pornography; production of materials which gravely injure good morals; abuse of the Sacrament of Confession (but not a violation of the sacramental seal); and defamation of a legitimate superior."[22][23] In July 2013 Vatican officials relieved Gruber of his monastic and priestly duties. Gruber can no longer wear the clothes of a Catholic priest or monk or celebrate Mass, and he is no longer a member of the Benedictine community.[24][25]

Saint Vincent Parish was founded in 1790. It was the first Catholic parish in Pennsylvania west of the Allegheny Mountains. Father Theodore Brouwers, O.F.M., purchased 300 acres (121 ha) of land called "Sportsmen's Hall Tract." A church was built and dedicated on July 19, 1835. It was named after St. Vincent de Paul, whose feast day is July 19 (Roman Calendar, 1737-1969) and September 27.[26]

The cornerstone of the basilica was laid in 1892, and the consecration took place on August 24, 1905. The basilica was completely restored in 1996, as part of the 150th anniversary of the founding of the college.[3]

Each year, on the Thursday before Thanksgiving, the Saint Vincent Community celebrates Founders Day, honoring all those who founded the college and have been a part of its community since its inception. The day features Honors Convocation (held in the Archabbey Basilica), a candle-lit turkey dinner in the gym, Zambelli fireworks and the campus light-up, featuring lighted arches in Melvin Platz.

The Saint Vincent College fight song, "Forward, Saint Vincent," was approved by the college's student government in 1996 and was written by Jen Waldmann, Heather Fields, and Chris Rodkey.