The Society of St Vincent de Paul is an international Catholic voluntary organization dedicated to the sanctification of its members through serving the poor and disadvantaged. Such service has been historically provided by the "home visit".[4]

The Society of St. Vincent de Paul was founded in 1833 to help impoverished people living in the slums of Paris, France. The primary figure behind the society's founding was Blessed Frédéric Ozanam, a French lawyer, author, and professor in the Sorbonne. Frédéric collaborated with Emmanuel Bailly, editor of the Tribune Catholique, in reviving a student organization which had been suspended during the revolutionary activity of July 1830. He was 20 years old when the society was founded.[5] and was beatified by Pope John Paul II in 1997. Emmanuel Bailly was chosen as the first President.

The Society took the Blessed Virgin Mary and Saint Vincent de Paul as its patrons under the influence of Sister Rosalie Rendu, D.C. Sister Rosalie (who was herself beatified in November 2003 by Pope John Paul II) was a member of the Daughters of Charity of St. Vincent de Paul, and was well known for her work with people in the slums of Paris. She guided Frédéric and his companions in their approach towards those in need.[6] 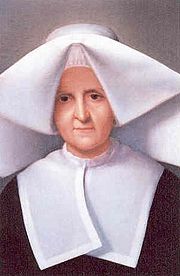 The society gradually expanded outside Paris in the mid 19th century and received benefactors in places such as Tours where figures such as the Venerable Leo Dupont, known as the Holy Man of Tours, became contributors.[7]

It was (Servant of God) Father Ignatius Spencer who first brought to the attention of Catholics in England and Wales the Society of St Vincent de Paul. On a number of visits to Paris he had met members of the original conference and had been impressed with their commitment to the poor. In September 1842 he received a visit from Monsieur Baudon who later became the Society's President- General in 1847. The purpose of Monsieur Baudon's visit was to try and create interest in the SVP and he was successful in persuading Father Spencer to write an account of the Society and its work in the Catholic Magazine. Little interest was shown at first but on the 29 January 1844, M. Pagliano, a London restaurant keeper who was a recent convert to the Catholic Faith, managed to gather 13 Catholic men together in London and the first English Conference of the Society of St. Vincent de Paul was founded.[8]

Early initiatives included the formation of the Catholic Shoe Black Brigade, providing boys with gainful employment and the home that was the start of “the Rescue Society” which under various names is still responsible for children in care in many dioceses.[9]

Today there are more than 10,000 members in more than 1,000 Conferences in the United Kingdom, making more than 500,000 recorded visits to more than 100,000 people. It is estimated that this amounts to well over one million hours of voluntary service.[9] 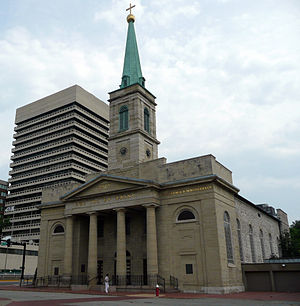 The Society’s first Conference in the United States was established in 1845 in St. Louis, Missouri at the Basilica of St. Louis, King of France, popularly called "The Old Cathedral". Fr. John Timon, CM, at that time a Vincentian Provincial of the Seminary, had recently returned from a conference with his congregation superiors in Paris. While there he learned about the St. Vincent de Paul Society and brought copies of the Rule of the Society back from Dublin, Ireland, to St. Louis. On November 16, 1845 Bishop Peter Richard Kenrick dedicated the new St. Vincent de Paul church on South Eighth Street and invited Timon to preach. Timon discussed the Society in his sermon.[10]

A number of prominent laymen of St. Louis attended the church dedication and decided to hold an organizational meeting. The first meeting of the Society of St. Vincent de Paul in the United States was held on November 20, 1845 and chaired by Judge Bryan Mullanphy. Twenty names appear on the list of founding members. Dr. Moses Linton was elected President, Bryan Mullanphy, Vice President, and Dennis Galvin, Second Vice President.[11] The president appointed a committee to meet with Bishop Kenrick, who appointed Father Ambrose Heim the groups Spiritual Advisor.

Father Gerald Ward was born in London 1806 and arrived in Australia on 7 September 1850 after being recruited to work in the Melbourne mission by the pioneer priest Fr Patrick Geoghegan. Fr Ward knew of the workings of the St Vincent de Paul Society and initiated its establishment in Australia on 5 March 1854 after witnessing the plight of people following the discovery of gold in Victoria. Fr Ward became the first president of the St Francis' Conference in Melbourne and began to address the problems he witnessed. One of his accomplishments was establishing the St Vincent de Paul orphanage in South Melbourne.[12]

Charles Gordon O'Neill was born in Glasgow in 1828. He graduated as a member of the Institution of Civil Engineers. Upon graduation he had joined the Society of St Vincent de Paul. He was secretary at Dumbarton in 1851. He led the St Vincent de Paul Society in the Western Districts of Scotland between 1859 and 1863. By 1863 was president of the Superior Council of Glasgow and a member of the Council General in Paris.[15]

The Society numbers about 800,000 members in some 140 countries worldwide, whose members operate through "conferences".[3] A conference may be based out of a church, community center, school, hospital, etc., and is composed of Catholic volunteers who dedicate their time and resources to help those in need in their community. Non-Catholics may join with the understanding that the society is a Catholic organization. Following the changes in the new Code of Canon Law of 1983, the Society is one of many private lay associations under the auspices of the Pontifical Council for the Laity.

The Society of St. Vincent de Paul (SVP) was founded in Ireland in 1844 (When it was part of the United Kingdom). It is the largest voluntary charitable organisation in Ireland. During its history it has helped people in need through a Famine, a Civil War, a War of Independence, two World Wars and several economic recessions. It is one of Ireland's best known and most widely supported organisations of social concern and action with over 11,500 volunteers active in every county in Ireland.[16]

Membership in the United States totals more than 172,000 in 4,600 communities. The national headquarters is in St. Louis. Programs include home visits, housing assistance, disaster relief, job training and placement, food pantries, dining halls, clothing, transportation and utility costs, care for the elderly and medicine. The Society in the United States provides more than $675 million in tangible and in-kind services, serves more than 14 million people in need each year, performs more than 654,000 visits to people in their homes, and delivers more than 7 million service hours to those in need. 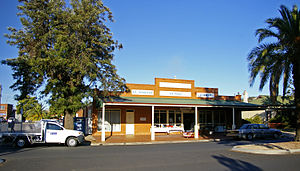 In Australia, the society has engaged over 40,000 members and has many more volunteers. 'Vinnies Youth', the youth membership of the Society in Australia, engage young people from the age of 10 to 30 in the society's many works throughout the country. For example, awareness raising activities, such as the CEO Sleepout, which aims to raise awareness of the plight of the homeless.[17]

In New Zealand, St Vincent de Paul is in operation in 23 regions with over 50 some shops which serve as the centres for welfare service. Young Vinnies are active at most of the Catholic schools and help with fund raising as well as training entering a conference and dealing directly with the poor and lonely. Food banks, food trucks and keeping at heart the Vincentian goal that 'no act of charity is foreign to the society' the work is varied.[18]

The Society of St. Vincent de Paul came to Mumbai in 1862, when the Conference of Our Lady of Hope, Bhuleshwar, was established by Fr. Leo Meurin, S.J. (later Bishop Meurin of Bombay) in the Cathedral there. With the closure of the Cathedral in 1942, the Conference was transferred to the Church of Our Lady of Health, Cavel. The second Conference, the Conference of St. Teresa, Girgaum was established in 1862 in Mumbai by Fr. Meurin. Early in 1863 he established four more conferences in Mumbai, namely, the Conferences of St. Peter, Bandra, St. Joseph, Umerkhadi, Our Lady of Victories, Mahim and St. Anne, Mazagaon.[19] St Vincent De Paul Society is very active in the southern part of India especially in Kerala. The Syro-Malabar Catholic Church is playing an important role in St Vincent De Paul Society works.