Saitama Prefecture (埼玉県, Saitama-ken?) is a prefecture of Japan located in the Kantō region of the island of Honshu.[1] The capital is the city of Saitama.[2]

This prefecture is part of the Greater Tokyo Area, and most of Saitama's cities can be described as suburbs of Tokyo, to which a large number of residents commute each day.[citation needed]

According to Sendai Kuji Hongi (Kujiki), Chichibu was one of 137 provinces during the reign of Emperor Sujin.[3] Chichibu Province was in Saitama's western part.

Saitama Prefecture was formerly part of the old Musashi Province.[4]

In the fifth year of the Keiun era (708), deposits of copper were reported to have been found in the Chichibu District of what is now Saitama Prefecture.

The Saitama area was historically known as a fertile agricultural region which produced much of the food for the Kantō region. During the Edo period, many fudai daimyo ruled small domains within the Saitama area.

After World War II, as Tokyo expanded rapidly and modern transportation allowed longer commutes, the lack of available land in Tokyo led to the rapid development of Saitama Prefecture, whose population has nearly tripled since 1960. Most of the cities in the prefecture are closely connected to downtown Tokyo by metropolitan rail, and operate largely as residential and commercial suburbs of Tokyo. 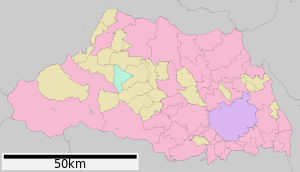 Saitama Prefecture is bordered by Tokyo, Chiba, Ibaraki, Tochigi, Gunma, Nagano, and Yamanashi Prefectures. It is located central-west of the Kanto region, measuring 103 km from east to west and 52 km from north to south. At 3,798 km2, it ranks as the ninth smallest prefecture. The eastern border with Chiba Prefecture is defined by the Edo River. The northern and north-western border lines with Gunma Prefecture are marked by the Tone River and the Kanagawa River and the drainage divides of the Arakawa River and Kanagawa River. The southwestern border is defined by the drainage divides of the Arakawa River, Tama River, and Fuefuki River. The eastern section of the southern border line, however, does not overlap with any geological feature.

The topography of Saitama Prefecture is largely divided by the Hachiōji Tectonic Line, which runs through Kodama, Ogawa, and Hannō, into the western mountain area and the eastern lowland area. The altitude, highest on the western side, gradually lowers eastward from mountain ranges to hills to plateaus to lowlands. The eastern lowlands and plateaus occupy 67.3% of the area.[5]

The eastern side, part of the Kantō Plain, can be further divided into nine separate expanses of hills and ten plateaus. The former occupy small areas neighboring the Kantō Mount Range, including the Hiki Hills and Sayama Hills. The latter are mainly surrounded by alluvial flood plains. In the southeastern portion of the prefecture, the Ōmiya Plateau stands in a southeastward direction, sandwiched by the Furutone River to the east and the Arakawa River to the west.[6]

The western side of the prefecture belongs to the Kantō Mountain Range with Chichibu Basin located in its center. The area to the west of the basin features high peaks such as Mount Sanpō (2,483 m) and Mount Kōbushi (2,475 m), in which the Arakawa River has its source. Most of the land is contained in Chichibu Tama Kai National Park. The area to east of the basin consists of relatively low mountains.

Radial transportation to and from Tokyo dominates transportation in the prefecture. Circular routes were constructed as bypasses to avoid congestion in central Tokyo.

Honda Airport for general aviation and the JASDF's Iruma Air Base,[8] and Kumagaya[9]

Rivers and canals including those developed in the Edo period (17th - 19th centuries) in the east of the prefecture are largely disused following the introduction of motorised land transport. The traces of water transports are found on the Tone River Kumagaya - Chiyoda, Gunma border and on the Arakawa River a tourist attraction in Nagatoro, Chichibu District[10] and petroleum tankers from Tokyo Bay to Wakō.[citation needed]

Saitama Prefecture has a number of sister city relationships with states and a province as listed below (in chronological order).[11]

The sports teams listed below are based in Saitama.

Most of the popular tourist sites in Saitama are located in the northwestern part of the prefecture, which is known as the Chichibu Region. This region mostly consists of a hilly and moderately mountainous area, and is situated in a rich natural environment. The region is very popular among residents of Saitama and neighboring prefectures for short trips, as it is easily accessible via the railroad network.