From Infogalactic: the planetary knowledge core
Jump to: navigation, search
This article is about the Sakarya (or Sangarius) River. For the Phrygian god who gave this river his name, see Sangarius (mythology). For the insect genus, see Sangarius (genus). 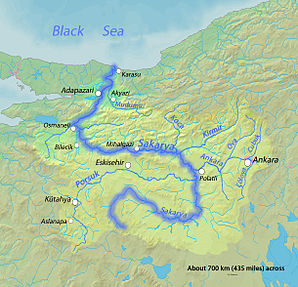 Map of the Sakarya River

The Sakarya (Turkish: Sakarya Irmağı, Greek: Σαγγάριος, Sangarios) is the third longest river in Turkey. It runs through what in ancient times was known as Phrygia.

The source of the river is the Bayat Yaylası (Bayat Plateau) which is located to the northeast of Afyon. Joined by the Porsuk Çayı (Porsuk Creek) close by the town of Polatlı, the river runs through the Adapazarı Ovası (Adapazarı Plains) before reaching the Black Sea. The Sakarya was once crossed by the Sangarius Bridge, constructed by the East Roman Emperor Justinian I (r. 527–565).

In the Middle Ages, the valley of the Sakarya was the home of the Söğüt tribe, which went on to establish the Ottoman Empire.