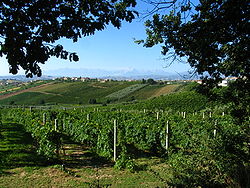 A classic Italian vineyard scene, with vines growing together with olive trees.

Italy is home to some of the oldest wine-producing regions in the world, and Italian wines are known worldwide for their broad variety. Italy, closely followed by France, is the world’s largest wine producer by volume. Its contribution is about 45–50 million hl per year, and represents about ⅓ of global production.[1] Italian wine is exported around the world and is also extremely popular in Italy: Italians rank fifth on the world wine consumption list by volume with 42 litres per capita consumption. Grapes are grown in almost every region of the country and there are more than one million vineyards under cultivation.

Etruscans and Greek settlers produced wine in Italy before the Romans started their own vineyards in the 2nd century B.C. Roman grape-growing and winemaking was prolific and well-organized, pioneering large-scale production and storage techniques like barrel-making and bottling.[2] 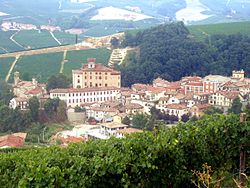 Vineyards around the town of Barolo.

Although vines had been cultivated from the wild Vitis vinifera grape for millennia, it wasn't until the Greek colonization that wine-making flourished. Viticulture was introduced into Sicily and southern Italy by the Mycenaean Greeks,[3] and was well established when the extensive Greek colonization transpired around 800 BC.[4][5] It was during the Roman defeat of the Carthaginians (acknowledged masters of wine-making) in the 2nd century BC that Italian wine production began to further flourish. Large-scale, slave-run plantations sprang up in many coastal areas and spread to such an extent that, in AD 92, emperor Domitian was forced to destroy a great number of vineyards in order to free up fertile land for food production.

During this time, viticulture outside of Italy was prohibited under Roman law. Exports to the provinces were reciprocated in exchange for more slaves, especially from Gaul where trade was intense, according to Pliny, due to the inhabitants being besotted with Italian wine, drinking it unmixed and without restraint.[6] It was customary to mix wine with a good proportion of water which may otherwise have been unpalatable, making wine drinking a fundamental part of early Italian life.

As the laws on provincial viticulture were relaxed, vast vineyards began to flourish in the rest of Europe, especially Gaul (present day France) and Hispania. This coincided with the cultivation of new vines, like biturica (ancestor of the Cabernets). These vineyards became hugely successful, to the point that Italy ultimately became an import centre for provincial wines.[2]

Depending on the vintage, modern Italy is the world's largest or second largest wine producer. In 2005, production was about 20% of the global total, second only to France, which produced 26%. In the same year, Italy's share in dollar value of table wine imports into the U.S. was 32%, Australia's was 24%, and France's was 20%. Along with Australia, Italy's market share has rapidly increased in recent years.[7]

In 1963, the first official Italian system of classification of wines was launched. Since then, several modifications and additions to the legislation have been made (a major one in 1992), the last of which, in 2010, has established four basic categories, which are consistent with the last EU regulation in matter of wine (2008–09). The categories, from the bottom level to the top one, are:

Within the DOP category, 'Classico' is a wine produced in the historically oldest part of the protected territory. 'Superiore' is a wine with at least 0.5 more alc%/vol than its correspondent regular DOP wine and produced using a smaller allowed quantity of grapes per hectare, generally yielding a higher quality. 'Riserva' is a wine that has been aged for a minimum period of time, depending on the typology (red, white, Traditional-method sparkling, Charmat-method sparkling). Sometimes, 'Classico' or 'Superiore' are themselves part of the name of the DOP (e.g. Chianti Classico DOCG or Soave Superiore DOCG).

The Italian Ministry of Agriculture (MIPAAF) regularly publishes updates to the official classification.[8][9]

It is important to remark that looser regulations do not necessarily correspond to lower quality. In fact, many IGP wines are actually top level products, mainly due to the special skills of their producers (e.g. so called "Super Tuscan" wines are generally IGP wines, but there are also several other IGP wines of superior quality).

Unlike France, Italy has never had an official classification of its best 'crus'. Private initiatives like the Comitato Grandi Cru d'Italia (Committee of the Grand Crus of Italy) and the Instituto del Vino Italiano di Qualità—Grandi marchi (Institute of Quality Italian Wine—Great Brands) each gather a selection of renowned top Italian wine producers, in an attempt to unofficially represent the Italian wine excellence.

In 2007 the Barbaresco Consorzio was the first to introduce the Menzioni Geografiche Aggiuntive (additional geographic mentions) also known as MEGA or subzones; there were 65 subzones vineyard areas, with one more approved in 2010 which brought the final number to 66.[10] The main goal was to put official boundaries to some of the most storied crus in order to protect them from unjustified expansion and exploitation.[10]

The Barolo Consorzio followed suit in 2010 with 181 MEGA, of which 170 were vineyard areas and 11 were village designations.[10] Following the introductions of MEGA for Barbaresco and Barolo the term Vigna (Italian for vineyard) can be used on labels after its respective MEGA and only if the vineyard is within one of the approved official geographic mentions.[10] The official introduction of subzones is strongly advocated by some for different denominations, but so far Barolo and Barbaresco are the only ones to have them.[11]

Italy's twenty wine regions correspond to the twenty administrative regions. Understanding of Italian wine becomes clearer with an understanding of the differences between each region; their cuisines reflect their indigenous wines, and vice versa. The 73 DOCG wines are located in 15 different regions but most of them are concentrated in Piedmont, Veneto and Tuscany. Among these are appellations appreciated and sought after by wine lovers around the world: Barolo, Barbaresco, and Brunello di Montalcino (colloquially known as the "Killer B's"). Other notable wines that in the latest years gain much attention in the international markets and among specialists are: Amarone della Valpolicella, Prosecco di Conegliano- Valdobbiadene, Taurasi from Campania, Franciacorta sparkling wines from Lombardy; evergreen wines are Chianti and Soave, while new wines from the Centre and South of Italy are quickly gaining recognition: Sagrantino, Primitivo, Nero D'Avola among others. The Friuli-Venezia Giulia is world famous for the quality of her white wines, like Pinot Grigio. Special sweet wines like Passitos and Moscatos, made in different regions, are also famous since old time.

The regions are, roughly from Northwest to Southeast: 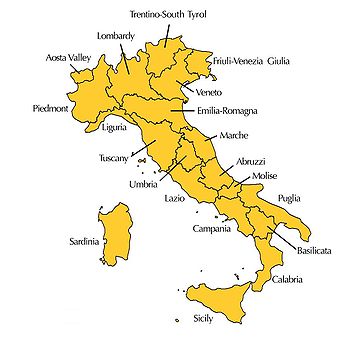 Italy's Ministry of Agriculture and Forestry (MIPAAF), has documented over 350 grapes and granted them "authorized" status. There are more than 500 other documented varieties in circulation as well. The following is a list of the most common and important of Italy's many grape varieties. 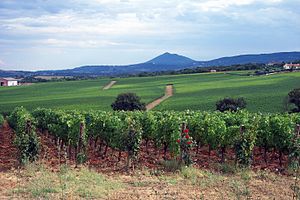 Sangiovese vineyards in the Val d'Orcia, Monte Amiata in the background. 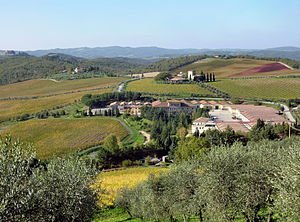 Vineyard in Gaiole in Chianti

The term "Super Tuscan" is a term (mostly used in the wine Anglosphere and virtually unknown in Italy) that describes any wine (mostly red, but sometimes also white) produced in Tuscany and that generally does not adhere to the traditional local DOC(G) regulations. As a result, Super Tuscans are usually Toscana IGT wines, while others are Bolgheri DOC, a designation of origin rather open to international grape varieties. Instead, traditional Tuscan DOC(G)s require that wines are made from native grapes and mostly Sangiovese. While sometimes Super Tuscans are actually produced by Sangiovese alone, they are also often obtained by (1) blending Sangiovese with international grapes (such as Cabernet Sauvignon, Merlot, Cabernet Franc, Syrah), (2) blending international grapes alone (especially classic Bordeaux grapes for reds; Chardonnay and Sauvignon blanc for whites), or (3) using one single international variety. In a sense, red Super Tuscans anticipated the Meritage, a well-known category of international Bordeaux-style reds of US origin.

Although an extraordinary amount of wines claim to be “the first Super Tuscan,” most would agree that this credit belongs to Sassicaia, the brainchild of marchese Mario Incisa della Rocchetta, who planted Cabernet Sauvignon at his Tenuta San Guido estate in Bolgheri back in 1944. It was for many years the marchese’s personal wine, until, starting with the 1968 vintage, it was released commercially in 1971.[17]

In 1968 Azienda Agricola San Felice produced a Super Tuscan called Vigorello, and in the 1970s Piero Antinori, whose family had been making wine for more than 600 years, also decided to make a richer wine by eliminating the white grapes from the Chianti blend, and instead adding Bordeaux varietals (namely, Cabernet Sauvignon and Merlot). He was inspired by Sassicaia, of which he was given the sale agency by his uncle Mario Incisa della Rocchetta. The result was one of the first Super Tuscans, which he named Tignanello, after the vineyard where the grapes were grown. What was formerly Chianti Classico Riserva Vigneto Tignanello, was pulled from the DOC in 1971, first eliminating the white grapes (then compulsory in Chianti DOC) and gradually adding French varieties. By 1975, Tignanello was made with 85% Sangiovese, 10% Cabernet Sauvignon, and 5% Cabernet Franc, and it remains so today.[17] Other winemakers started experimenting with Super Tuscan blends of their own shortly thereafter.

Because these wines did not conform to strict DOC(G) classifications, they were initially labeled as vino da tavola, meaning "table wine," an old official category ordinarily reserved for lower quality wines. The creation of the Indicazione Geografica Tipica category (technically indicating a level of quality between vino da tavola and DOC(G)) in 1992 and the DOC Bolgheri label in 1994 helped bring Super Tuscans "back into the fold" from a regulatory standpoint. Since the pioneering work of the Super Tuscans, there has been a rapid expansion in production of high-quality wines throughout Italy that do not qualify for DOC or DOCG classification, as a result of the efforts of a new generation of Italian wine producers and, in some cases, flying winemakers.

Many international wine guides and wine publications rate the most popular Italian wines. Among the Italian publications, Gambero Rosso is probably the most influential. In particular, the wines that are annually given the highest rating of "three glasses" (Tre Bicchieri) attract much attention. Recently, other guides, such as Slow Wine, published by Slow Food Italia, and Bibenda, compiled by the Associazione Italiana Sommelier (AIS), have also gained attention both among professionals and amateurs. Slow Wine has the interesting feature of reporting on several wineries (small and medium) that genuinely represent the territory and on products that are especially interesting for their price/quality ratio (Vini Slow and Vini Quotidiani).

Vino cotto (literally cooked wine) is a form of wine from the Marche and Abruzzo in Central Italy. It is typically made by individuals for their own use as it cannot legally be sold as wine. The must, from any of several local varieties of grapes, is heated in a copper vessel where it is reduced in volume by up to a third before fermenting in old wooden barrels. It can be aged for years, barrels being topped up with each harvest. It is a strong ruby-colored wine, somewhat similar to Madeira, usually drunk with sweet puddings.

Vincotto, typically from Apulia, also starts as a cooked must but is not fermented, resulting in a sweet syrup suitable for the preparation of sweets and soft drinks. Once reduced and allowed to cool it is aged in storage for a few years.