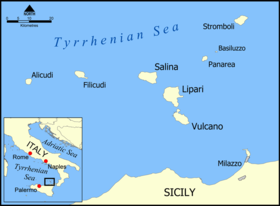 Salina is an island in the Aeolian Islands (Italian: Isole Eolie, Sicilian: Ìsuli Eoli) north of Sicily, southern Italy. It is the second largest island in the archipelago.

Salina is divided between three comuni: Santa Marina on the eastern coast, Malfa to the north, and Leni to the south-west. From Leni down towards the sea is the village of Rinella, Sicily. Above the village of Leni is Valdichiesa in the center of the island. The other smaller villages are Capo Faro, Pollara and Lingua.

There are currently approximately 4,000 residents living on the island.

Salina has a total surface area of 27 km2 (10 sq mi). It is included on the World Heritage List especially because of its worth for vulcanology. It is composed of six volcanoes: the oldest ones are at Pizzo di Corvo, Monte Rivi and close to Capo Faro, although these are barely recognisable from a morphological point of view, while the volcano-layer of Monte Fossa delle Felci at 968 m (3,176 ft) is the highest peak in the archipelago and Monte dei Porri 886 m (2,907 ft) are both almost perfectly preserved. A lower crater lies just above sea level near the small village of Pollara,on the north west corner of the island, half of which has fallen into the sea.

The most recent eruption on Salina occurred on the western part of the island about 13,000 years ago and formed the semi-circular crater of Pollara; its activity was mainly explosive and produced large pumice deposits.

All that remains of the endogenic activities are some post-volcanic phenomena called “gurgling” and a thermal spring at Pertuso. The gurgling phenomena are at Rinella and are basically caused by the emission of underwater gas (hydrogen sulphate) and vapours. When this phenomenon is at its most active it can lift the sea-bed.

From a distance Salina looks entirely green with two rounded high mountains and a smooth coastline. More than 400 different types of plants grow on the island and grapes, olives and capers are cultivated.

Salina was the first among the Aeolian islands to protect its environment with a natural preserve, known as the Riserva Naturale del Fossa delle Felci e dei Porri.

The mountainsides of the island are covered with ferns, poplars, chestnut trees and typical Mediterranean vegetation including with caper bushes, prickly pear cactus. and a variety of orchards, olive groves and vineyards. The island is particularly notable for Malvasia, a famous white wine that is only produced on Salina. It is golden in colour and has an intense, delicately sweet bouquet. There has also been a local revival of the production of superior-quality low-acid olive oil.

It is claimed that Salina produces the best capers in the world and during the first weekend of June there is an annual caper festival.[1]

A Greek settlement, from the fourth century BC through to the times of Imperial Rome, once lay on the modern-day site of the small town of Santa Marina. A number of tombs from this era have been discovered further inland. Several traces of Greek and Roman culture have been found on the island.

In the Hellenic Age the island was named "Didyme" (Δίδυμη), a Greek name which refers to the two mountains as "twins". The island was inhabited as far back as the Bronze Age and has been developed and then abandoned many times over the subsequent millennia.

Areas on the island, including the two mountain peaks, were designated as a natural reserve in 1981.

In the 18th century the ruins of a typical Imperial Roman villa were noted here but have since sunk into the ground.

There is an annual Caper Festival held on Salina during the first week of June every year.

The first week in October is the Eolian Food and Wine week.

There is the SalinaDocFest, an International Festival on Narrative Documentary that takes place in Salina every year since 2007.

Salina has two ports, Santa Marina and Rinella, served by ferries and hydrofoils from Hydrofoil service is active from Naples, Palermo, Reggio Calabria, Messina and Milazzo.

There is a regular bus service connecting all the villages on the island. A main road connects Lingua, Santa Marina, Malfa and Pollara and a side road runs between the two volcanoes to Leni and Rinella.